Photo prompt round up – Woodland #writephoto 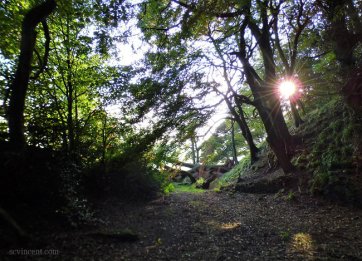 The photo for this week’s prompt was taken on the edge of the south Yorkshire village of  High Bradfield. The village is perched upon a hill and its most prominent feature is the church. Beyond the churchyard… whose walls we had to climb until we finally found a legitimate pathway on a later visit… is a mysterious mound.

It is not just we who think it so… and there is not just one of them, but two. The jury is still out on their origins. The tallest of them is a conical, man-made hill some thirty four feet high. That doesn’t sound a great deal… but when you stand in its shadow, you see just how big that really is. The lower hill is surrounded by an earthwork over three hundred feet long. It is not an insignificant site. 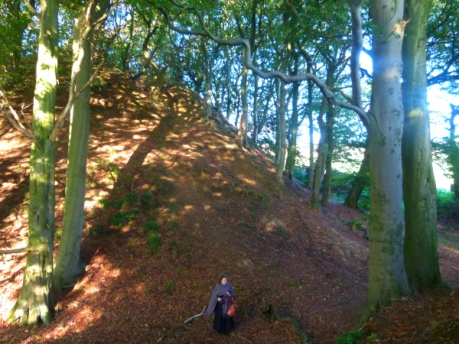 Photo: Stuart France from his post ‘Here be Hobbits…’

Stuart and I have visited the site on several occasions. I know I have written about the place… but will WP let me find the right posts? Hrmph.

The first time we climbed the hill with a friend, not only marked a total fall from dignity on my behalf, but showed us that at least one of the theories about the place made little sense at all. The last time we were there, we had an odd encounter with the sheep who ‘cut’ the churchyard grass.

The most prevalent theory about the mounds is that they are a Norman motte and bailey castle. And that may well be true. You have to imagine the place without the trees that have colonised the mounds in recent centuries. There is an undoubted resemblance to other well-preserved Norman mounds, and in particular the twin mounds of the Bass of Inverurie. The lower mound could have served as the bailey, the palisaded compound where food, horses, servants and beasts were protected. The taller mound would therefore be the motte upon which the fortified wooden castle would have been built.

The problem is that the hill is conical… there really is no room for a castle, even the smallest, on the top. You would barely get a garden shed up there… let alone a wooden fort.  And anyway, why build it right here when there is a far more commanding position overlooking the whole valley below, the moorland and all the approaches not half a mile away on the rocky escarpment called Castle Hill, where there is a stone enclosure of ancient date?

Defensively, it makes no sense. Politically it might, if the Normans took over and imposed their presence on a pre-existing site that held some importance for the local people, stamping their own authority on the landscape.

Another theory suggests it may predate the Normans, who turned up here nearly a thousand years ago. It might be Saxon, which would fit as there is a Saxon settlement site below the village. That could push it back a further five or six hundred years. Or it could be even older… a local ‘meeting place’… a sacred site perhaps… a place of importance to the local population. Considering that we know that the Church took over ancient sacred sites to impose their presence on the community, following Pope Gregory’s instructions to Mellitus, that would make sense too. 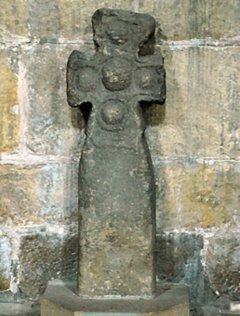 The current church dates from the 1420s, but retains traces of an earlier twelfth century church that would be consistent with a Norman motte and bailey close by. The Normans often built their churches close to their defensive points to protect them. The trouble here is that the church is built on the site of an older, Anglo-Saxon place of worship that predates the Norman occupation by centuries.

Excavations by antiquarians in 1720 found large, dressed stones on the site, evidently worked with tools. I can find nothing else to suggest why they reached their conclusions, not can I find any more recent archaeological data. So the jury remains officially out on the mounds of High Bradfield.

Our theory is that this may have been an ancient and sacred site, subsequently taken over by the Saxons, the Church and the Normans… thus maintaining its place at the heart of the community while imposing their presence on its people.

It would make political and strategic sense of a very odd site… and it would not be the first time a ‘Norman motte and bailey’ turned out to be much, much older… 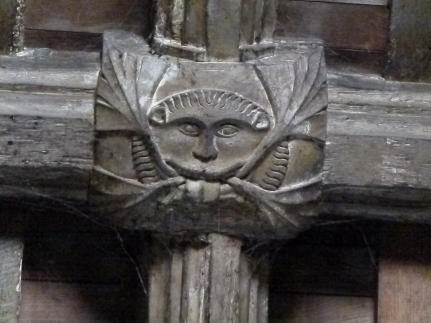 Thank you so much to everyone who took part this week.

I have shared as many contributions as I could during the week; I schedule reblogs as posts come in, until I run out of space. All the posts are listed below, please click on the links below to read them and leave a comment for the author!

A new prompt will be published later today and I will reblog as many as I can through the week. All contributions will be featured in the round-up on Thursday.

If you have written a post for this challenge and it does not appear in the round-up, please leave a link to your post in the comments and I will add it to the list.

Come and join in!

Many thanks to this weeks contributors:

Ashwini at Kaleidoscope of my life

Victoria Bruce at The Blurred Line

Suzanne at Calm and Chaos

Joelle LeGendre at Two on a Rant

Fandango at This, That and the Other

Ritu Bhathal at But I Smile Anyway

Alethea Kehas at Not Tomatoes

James at Powered by Robots

Stoner on a Rollercoaster

Sue Vincent is a Yorkshire-born writer and one of the Directors of The Silent Eye, a modern Mystery School. She writes alone and with Stuart France, exploring ancient myths, the mysterious landscape of Albion and the inner journey of the soul. Find out more at France and Vincent. She is owned by a small dog who also blogs. Follow her at scvincent.com and on Twitter @SCVincent. Find her books on Goodreads and follow her on Amazon worldwide to find out about new releases and offers. Email: findme@scvincent.com.
View all posts by Sue Vincent →
This entry was posted in photo prompt, Photography, Poetry, Uncategorized and tagged fantasy, fiction, flash fiction, humour, imagination, mystery, short story, symbolism, writing challenge, writing prompt. Bookmark the permalink.

21 Responses to Photo prompt round up – Woodland #writephoto