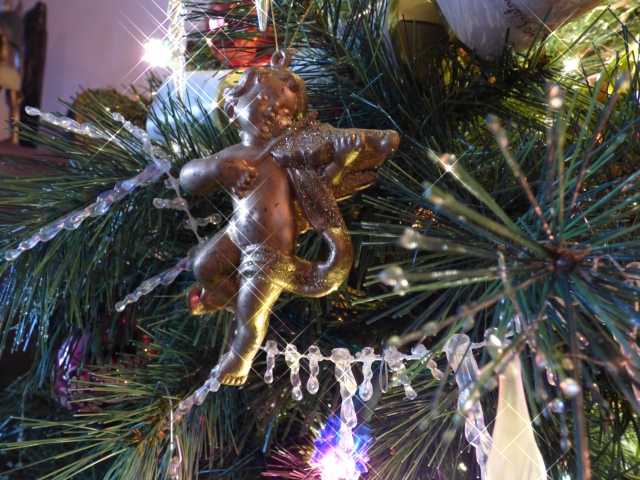 “I must be mad.” A wry smile played amongst the wrinkles as she heaved the top half of the faded tree into place. Not a large tree… about the same height as its owner. Taller, probably, these days, she thought. She had always struggled with the damned thing. Why today? She cursed herself for an idiot, laughed at herself… a fine picture in her nightie putting up a Christmas tree no-one would see. Except her, of course. She would know.

So many times she had dressed this tree and carefully packed it away again. Every year for over half a century. Gawd but that sounded a long time. Somehow, at this end of life it didn’t feel it. But the children had grown and had homes of their own now… trees and children of their own. There had been the year when no-one came… and there is nothing sadder than a Christmas tree no child will see. She hadn’t bothered with the tree after that; not for a long time. Why she had decided to drag it out this year she would never know.

Boxes littered the floor; scraps of tarnished tinsel, the inevitable sparkle of old glitter and dust motes. She straightened the branches, bending their ageing wire into some semblance of order. The thing looked a sorry specimen, after all. Years of use and longer years in the cupboard under the stairs had taken their toll. “Should have left it there.” Her voice broke the silence that hung in the air. Too much silence, she thought.

In the bottom of the box she spied the old CD in its dog-eared sleeve …old favourites. Would it still work? They would make her cry… they always did… but what the hell. The machine groaned and creaked as she pressed ‘play’ and the crooner oozed into the familiar song. She could never hear it without tears welling unbidden; even in the supermarket. That and the damned chestnuts roasting … got her every time, they did. Ah well, she had memories for every note … she pressed repeat. It could keep playing.

She sniffed and wiped her eyes on her sleeve, smiling. Then, eyes narrowed with determination, she bent her knees. Joints protested at the unaccustomed movement; it took a while and a fair amount of cursing to make it to the floor. She had forgotten what the world looked like from down here. The tree looked taller, more imposing. A child’s eye view… Mind you, they had been proper trees then, smelling of pine and shedding needles everywhere that turned up all year in the strangest places. There had been trees so tall they’d had to saw the bottom off to get them in the room… and the ceilings were high in the big old house. She remembered Grandad wrestling with the biggest of them, fighting his way in. It took up half the room. The whole place had smelled like Christmas, garlanded with holly and mistletoe. She’d never liked killing trees though… 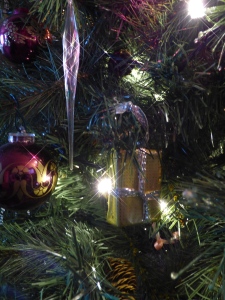 They’d always decorated the laburnum outside the French windows too… stringing monkey nuts together to make garlands and making fat balls and coconuts instead of baubles for the birds to have Christmas too. That was where she’d learned their names. So long ago now…

The lights were all tangled, of course. “Sod’s law”, she thought, “I’ll sort ‘em out and then they won’t work…” Even so, her fingers began the long, fiddly job, untangling the wires. She remembered tiny candles on the tree as a girl. Little golden holders with clips on the end. “Gawd, what a fire hazard that must have been. I suppose that’s why we only lit them Christmas Eve.” She plugged the wires into the socket, astonished to find herself surrounded by pinpoints of multi-coloured light. “Bloody hell…” She winced as she climbed to her feet once more, catching her breath as she straightened the stiff spine before winding the little lamps around the tree. Somehow they seemed to bring it to life.

Tinsel should be next, she thought, picking up the crumbling mass. The tarnished strands looked drab and brittle. Maybe not… She’d always liked the tinsel. Even the plain silver stuff they’d had back then… thin and sparse. Not like the big, thick garlands of it she had bought when the children were small… emerald green. They had spent one December making big, shiny bows to hold the top loops of the draped tinsel that ran round the picture rail. Faded green now, almost silver. Full circle…

The icicles were okay though. She loved those… clear and iridescent, they had always looked good. Garlands of small ones to drape through the branches… big individual ones to hang alone… they looked almost new, like the day they had bought them. Their first Christmas together with the kids… Woolworths, she recalled. They had been expensive back then… they could only afford a few and by the next year the icicles were frosted twists. Not the same at all.

There had been icicles on the real tree too… glass ones. She remembered the care with which they had been packed and unpacked each year from the sectioned cardboard boxes. Each one wrapped in tissue paper… and still there were always broken baubles; shattered piles of gilded shards amid the treasures. The caps went missing too… and the little sprung pins that went through them to hang on the tree. It was always a time of wonder for the little girl, unwrapping the magic of Christmas, discovering old friends… all the baubles were special and had their stories that wound back through the garlands of time and family. Plastic now. Safer. But not the same.

Adeste Fideles… Grandma used to love that song. She sang along with the Latin carol. Her mind went back to the merry old lady in the paper crown, scraping the brazil nuts she loved against her few remaining teeth. Granny had hated the false ones. “Yeah…. I can understand that now.” Paper crowns… and turkey and Christmas pudding…. And Great Granny needing the commode halfway through Christmas dinner every year… “And I’m older now than she was…”

She found a few crackers… squashed and battered. They wouldn’t bang, not now. But then, she wouldn’t be pulling them. They’d had to help great granny pull them too. Still, they had the paper crowns and corny jokes inside. Grinning with remembered mischief, she teased the crimped end apart, tipping the little plastic toy into her hand. Utter rubbish of course… but she had been adept at peeking to see what was in them when she was little. She put the cheap puzzle back in the cracker, crimping the ends so you couldn’t tell… she could still do it… not that anyone would look. They probably never had…then she placed the crackers on the tree. The magic was always there for children… they didn’t care that the toys in the crackers were rubbish. It was the laughter. 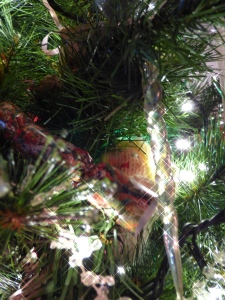 She was near the bottom of the box now. Were they really still there? Those little parcels, neatly wrapped… their very first Christmas when they couldn’t afford baubles so had wrapped all manner of things… mainly matchboxes…to hang on the tree. Then there were the little knitted toys her own granny had made… a snowman, an angel and a Santa. The star was missing though… the big, shiny star for the top of the tree. She had made a hole in the back so she could light it up… but it had gone, who knew where… He was still there though. She smiled, reaching down to the bottom of the box… the robin was a little moth-eaten and threadbare, but he still seemed to smile back at her. Could robins smile? He would be the star. She placed him on top of the tree and stood back. A bit wonky, but suddenly it felt like Christmas.

There was still something missing though. Rooting around in the screwed up paper she found the little bag… the nativity figures. She set them out around the base of the tree. Crudely carved, she loved the lines of the tall Magi… and especially the little wooden donkey. She was still holding him as she sat down, breathing in harsh little gasps… she needed a rest. Getting old was no fun…

Rheumy eyes travelled across the tree. She’d always had good taste, always been at war with herself over the Christmas decorations. On one level she saw them as a little overblown and tawdry… but they held memories. Lifetimes of them, not just her own. Every bauble held a story… and they would all be forgotten one day. She was their custodian. For now. Did it matter? Probably not, not any more. The children had their own memories… no-one else would care, not really. They wouldn’t even know they didn’t know, would they? 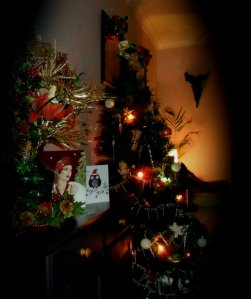 Half a dozen Christmas cards on the mantle… old friends far away, one to Grandma. That made her smile. She’d kept them, the special ones… the ‘I love you’s, the ones the children had made… they were there. She remembered long strings of cards filling the walls once upon a time, hundreds of them. Never enough room. Such a lovely thing… paper thoughts that had fallen on the doormat, bridging miles and bringing friends and family close to the heart with each opened envelope. She was tired now. “…Have yourself a merry little Christmas, Let your heart be light…” Said it all that song… The room blurred as the tears came. They always did.

Gentle tears, greeting each memory with love, grateful for their presence. Setting them free like snowy doves, saying farewell to the memories that would not return to her ageing mind. There had been love, so much love. And laughter. Silliness and games, tears and longing. Empty places, missing faces, new brides, new babes…There had been Life. And every year of it, there had been Christmas. “…Through the years we all will be together, if the Fates allow…” Would they come, she wondered? Would they be waiting? She stroked the rough lines of the cockeyed wooden donkey… she’d have to put him with the others. Let him go. Not yet though… a few more minutes…

Outside she could hear children playing in the August sun… 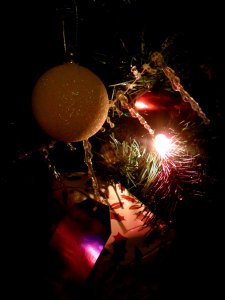 The young woman watched from the corner of the room, silent and unseen. She was filled with love for this little old lady. Her heart ached for her, wanting to reach out and wipe the last traces of tears from the withered cheeks… yet she smiled too, knowing they were not tears of regret for loves that were lost, but joy for the love she had known.

She watched as the eyes closed and the mouth fell open, saw the arthritic fingers relax and the little wooden donkey fall to her lap. He would stay with her till they found her.

Unseen, unfelt, she studied the quiet figure, moving closer, dropping an ephemeral kiss on her brow. Where had the years gone? How quickly they had flown… what had she learned and what would come next?

She turned to say a last goodbye to the faded glory of the Christmas tree… a present of Christmas past. A final gift. A Christmas feast of love and memory illuminated by fairy lights. The lights filled the dark corner of the little room. Lights filled with Love and the promise of a greater Light beyond.

Light that drew her like open arms, waiting… drawing her… onward.

There was always Light and Love at Christmas. 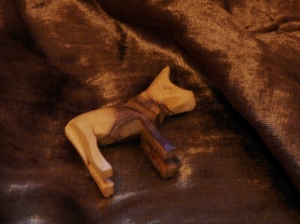