We followed a golden path through a wood steeped in history and mystery. Mesolithic folk once walked here, whose flints are found eroding from the soft earth. Mines have been dug to gather minerals from deep below a surface where bars of gold have been found with no known origin to explain their presence. The shadows of legends seem to flit across peripheral vision and even on a golden autumn day, there is a feeling of being watched by something older than Man.

We had always planned to return to Alderley Edge and we will doubtless have to go back again. There is simply never enough time to see everything at any site…not properly. You need time to sit with a place, to listen to the whispering of blade and leaf and the long, slow voice of stone. And here, there are so many secrets to discover.

Many of these are open secrets, known to every child who read the adventures of Colin and Susan as, aided by the wizard, Cadellin Silverbrow, they sought to keep the Weirdstone of Brisingamen from the evil Grimnir. Alan Garner’s classic book, followed by its later sequels The Moon of Gomrath and Boneland, brings the magic of Alderley Edge to life, drawing upon both its history and the many legends that weave themselves through the trees and stones of this place.

Our first stop would be one of those stones, perhaps the best known on the Edge. We followed Garner’s Elven road to the Golden Stone. Unless you are looking for it, you might well pass by this fairly unremarkable cleft stone. It is thought to be an ancient boundary marker, but other than that, no-one really knows much about it. It may once have been a standing stone, though it is difficult to picture now and the rear edge of the stone seems worn by the passage of many feet. Perhaps it had a practical purpose… maybe it was a place to stand and get your bearings in the landscape. Perhaps it had some spiritual significance, and many have seen a golden aura or glow emanating from the stone.

It is possible that the stone was both practical and spiritual; did Golden Stone get its name because it was used in the fashioning of the many prehistoric gold bars found in the area…one at the stone itself? These beautifully crafted bars are not as prosaic as their modern counterparts, but look like ceremonial axe-heads, inscribed and pattered. Finding out anything official about them has so far proved rather difficult. Doubtless the authorities do not want people digging up the wood in the hopes of further treasure, although it does seem to echo at least one of the legends… that of the Wizard of the Edge and his chamber full of gold.

We walked on, stopping to look out at the plain below the plateau that rises high above the modern world, seemingly far apart from it. The Edge was once a beacon hill and remains of the beacon itself can still be found. It is said that the beacons were lit here when the Spanish Armada was sighted off the south coast in 1588 and, as the fires were lit across the land, it took a mere twelve hours for the news to reach York, over three hundred miles away. At a time when the fastest mode of transport was a horse, that is remarkable.

In those days there were no trees to obscure the view and the fires would have been seen across a huge distance. Before the trees were planted a mere three hundred years ago, the rocky plateau bore no trees at all and you could see as far as Wales to the west and for miles in every direction.

Today, one of the best vistas is from the barren rock of Stormy Point. It is here that we found the old copper workings called the Devil’s Grave. Garner wrote in Weirdstone that, “If you run round theer three times widdershins Owd Nick’s supposed to come up and fetch you.” It may be an old mine working, but it is a strange place. Even in recent years people have reported the sound of music coming up from the depths in the dead of night… 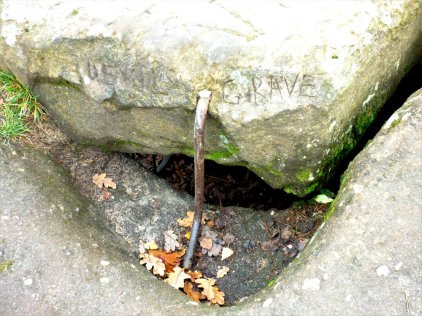 The mine is now protected from exploration bu rusting iron bars, but you have to wonder if that would stop the creatures of the shadows… it is here that Susan and Colin first met the svart-alfar as the denizens of darkness poured from the mines to hunt down the two children.

Yet, there is an odd sense that this is a warded place. It has nothing to do with iron bars or the modern twin demons of health and safety. The entrance is through a narrow ‘squeeze’ in the rock and once between the low walls, the atmosphere changes. Perhaps it has something to do with the legendary knights who are said to sleep beneath the hill.

Our time, this time, was running out and we began to make our way back, passing, as we did so, a stone circle. For once, we were not enthusing… the Druid’s Circle is nothing of the sort… it was built as a folly by the Stanley family who owned the land during the eighteenth century, with a view to ‘improving the landscape’. It is almost perfectly circular and the stones are far too perfectly placed and, in contrast to our often messy little circles, it feels as dead as a doornail.  Even so, the area itself is a special place for many pagans who use the landscape to celebrate the rites of the turning year.

Beyond the trees the distant hills watch over the Edge. It truly is a magical landscape. The name, ‘Alderley’, is given the usual official interpretation, assigning it as belonging to a named person… in this case either ‘Aldred’s Clearing’ or ‘the meadow or woodland clearing of a woman called Alðrȳð’. I prefer the implications of Stuart’s spelling of Alder-Ley.  The alder is one of the sacred trees of the ancient folk of this land. It is associated with Bran the Blessed, with resurrection and rebirth and Gwern son of Branwen, the daughter of Llŷr, is named for the alder. Add to that the assertion that two major leys cross at Alder-ley and you have a recipe for magic. There is so much more to see and feel here…so much more than just a walk in the woods.

Sue Vincent is a Yorkshire-born writer and one of the Directors of The Silent Eye, a modern Mystery School. She writes alone and with Stuart France, exploring ancient myths, the mysterious landscape of Albion and the inner journey of the soul. Find out more at France and Vincent. She is owned by a small dog who also blogs. Follow her at scvincent.com and on Twitter @SCVincent. Find her books on Goodreads and follow her on Amazon worldwide to find out about new releases and offers. Email: findme@scvincent.com.
View all posts by Sue Vincent →
This entry was posted in adventure, Ancient sites, Books, Crucible of the Sun, Don and Wen, History, Photography, Stuart France and Sue Vincent and tagged Alan Garner, Aldserley edge, gold, Mabinogion, sleeping knights, stone circle, svart alfar, treasure, Weirdstone of Brisingamen.. Bookmark the permalink.