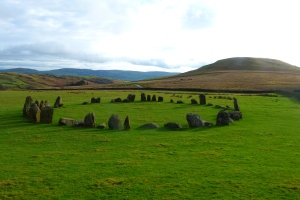 … Brown went on through the night until he saw a fire in the distance.

He walked towards it and as he drew near he saw a large house, which he entered.

Inside the house a large crowd of ferocious looking men were fighting wildly.

Their chieftain, who had climbed into the crossbeams of the roof to escape the fight, called out from his vantage.

“You can stop your melee now, for I have a better gift than the one you lost this night.”

Sue Vincent is a Yorkshire-born writer and one of the Directors of The Silent Eye, a modern Mystery School. She writes alone and with Stuart France, exploring ancient myths, the mysterious landscape of Albion and the inner journey of the soul. Find out more at France and Vincent. She is owned by a small dog who also blogs. Follow her at scvincent.com and on Twitter @SCVincent. Find her books on Goodreads and follow her on Amazon worldwide to find out about new releases and offers. Email: findme@scvincent.com.
View all posts by Sue Vincent →
This entry was posted in albion, Ancient sites, france and vincent, Mythology, Photography, Sacred sites, Stuart France and tagged Folk Tale, landscape, magic, mystery, psychology, story. Bookmark the permalink.