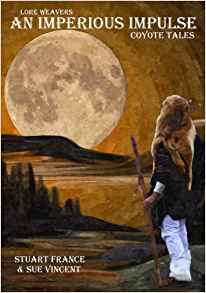 Long ago Coyote was walking his way.

He came to a hill on which he saw a man cast his eyes out of his head into a Flux Tree.

They hung in the branches of the tree until the man cried out, ‘Eyes come back to me’ which they did, flying back into his eye sockets with a reassuring Throp!

Coyote desperately wanted to learn the trick so he begged the man to teach him it until the man agreed.

‘Be careful, Coyote’ said the man, ‘never perform this trick more than four times in any one day.’

No sooner had the man gone than Coyote’s eyes were out of his head and up in the Flux Tree.

He could see over low hills.

He could see where the stream that disappeared in the valley went and he could also see the shape of things for miles.

He performed the trick four times in quick succession to make sure he had it right and then thought.

‘What’s good for him may not be so good for me.’

So he cast his eyes into the Flux Tree a fifth time but when he called them back they stayed there.

Poor Coyote stumbled about the Flux Tree grove bumping into things and crying.

Exhausted he lay down to sleep.

Before long some mice came by and thinking Coyote dead they started to nibble his hair in order to make a nest.

Coyote let his mouth hang open and caught one by the tail.

Sue Vincent is a Yorkshire-born writer and one of the Directors of The Silent Eye, a modern Mystery School. She writes alone and with Stuart France, exploring ancient myths, the mysterious landscape of Albion and the inner journey of the soul. Find out more at France and Vincent. She is owned by a small dog who also blogs. Follow her at scvincent.com and on Twitter @SCVincent. Find her books on Goodreads and follow her on Amazon worldwide to find out about new releases and offers. Email: findme@scvincent.com.
View all posts by Sue Vincent →
This entry was posted in Art, Books, france and vincent, Stuart France and tagged Coyote, Folk Tale, landscape, magic, mystery, Mythology, story, Trickster, writing. Bookmark the permalink.