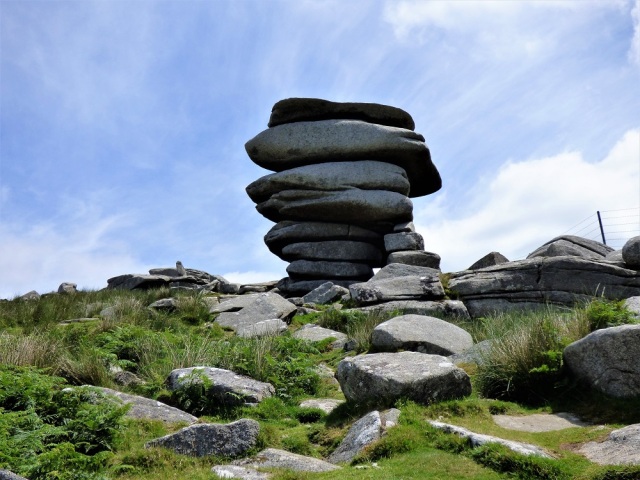 Three days and countless ancient places earlier, our attempts to visit the Cheesewring with Alethea and Larissa had been thwarted by the roiling mists of Bodmin Moor. Mists or not, we were determined to try again on our way home, so once again we found ourselves walking through the triple stone circles of the Hurlers. 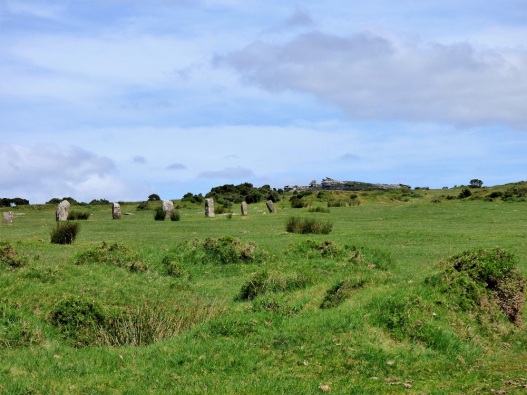 This time it was sunny and there were people wandering the stones with us… lots of them. There is much to be said for choosing a day of poor weather when visiting ancient sites. It is not that we object to sharing them but it is much harder to get to the heart of a place when it is full of visitors. It is also unpleasant to see how some… a very few… treat these important parts of our heritage. We view them as the sacred places they were to those who built them and accord them the reverence and respect we would accord to any place of worship, ancient or modern. We do not always have to share a faith to recognise that, at its heart, when humanity turns its face to the stars we are seeing the same Light.

So, leaving the stones and its visitors behind, we passed through with a moment’s acknowledgement of their presence and headed for the Cheesewring, a precarious pile of rock named for its resemblance to an old type of cheese press. It stands at the centre of a once-inhabited landscape and would doubtless have been revered for the spirit of the stone. The formation, over thirty feet high, is natural, carved by thousands of years of weathering… or so the prosaically-minded will tell you. Others will recount how the rocks were piled during a wager between a giant and a saint.

The Giants of Cornwall were unhappy. Christianity had come to the land and the saints were taking over their holy wells and sacred hills. One of the biggest Giants was Uther (who just happens to share his name with King Arthur’s father… but I digress…). Uther was not only the strongest of the Giants, but also amongst the cleverest and he was chosen to represent the Giants’ cause and get rid of the encroaching saints. 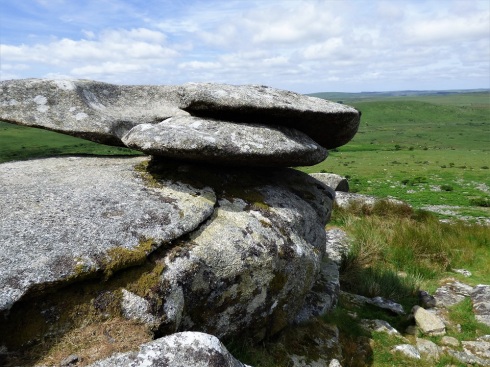 He went to Saint Tue, a frail, ascetic man who fasted much and proposed a rock-throwing contest, to which the saint agreed. If the Giant won, the saints would leave the land, returning the holy wells and their offerings to their rightful owners. If the saint won, the Giants would accept the new faith. Uther threw the first stone, a huge boulder which landed on the summit of Stowe Hill. Tue looked at the stones and, his heart full of prayer, lifted lightly a great rock and hurled it at the hill.

Time after time the two contended, until they each had a pile of rocks twelve boulders high, perfectly poised, one atop the other. When Uther hurled the thirteenth rock it missed his pile and rolled down the hill. Tue hefted the final stone, praying with all his might… and an angel carried it to the top of the pile. The Giants had lost and were converted to Christianity and the face of the West Country changed forever. But atop Stowe’s Hill, the stack of boulders remains, still perfectly balanced.

Sue Vincent is a Yorkshire-born writer and one of the Directors of The Silent Eye, a modern Mystery School. She writes alone and with Stuart France, exploring ancient myths, the mysterious landscape of Albion and the inner journey of the soul. Find out more at France and Vincent. She is owned by a small dog who also blogs. Follow her at scvincent.com and on Twitter @SCVincent. Find her books on Goodreads and follow her on Amazon worldwide to find out about new releases and offers. Email: findme@scvincent.com.
View all posts by Sue Vincent →
This entry was posted in adventure, albion, Ancestors, Ancient sites, archaeology, Books, france and vincent, History, Photography, road trip, travel and tagged Bodmin Moor, Cheesewring, giants, heritage, Hurlers, Minions, Stowe's Hill, tor enclosure. Bookmark the permalink.