I write Scifi, Fantasy and Paranormal. Most of my stories are about people who have adventures they never expected. Think Twilight Zone or Amazing stories. Something along those lines.

I love to talk about writing any chance I get, and during the course of the conversation people invariably ask where I get my ideas. It takes an imagination.

You have to have the kind of mind that absorbs details and recognizes their potential. Little bits of information, witty comments, engaging phrases, even someone’s appearance or mannerisms. You take note of them and when you sit down in front of the computer you begin to weave them together into a coherent story. Before long you’ve built an entire scenario around something most people overlook.

My latest book began like this. The company where my son, Hunter, worked had sent him to a little town in the state of Arkansas for a week of training. A place so small they rolled the sidewalks up at night. He called me one evening, complaining he had nothing to do but sit in his room and watch reruns on television.

I have three kids and he’s the one with the biggest imagination. Not only did he write “The Askape Rats Take Over the White House” at the tender young age of seven, but he illustrated it. So I suggested he help me develop a new character. He must have been bored out of his mind, because he agreed. And that’s how Xander, the Mipin was born. Over the next few years, I took his character and built the story from his contributions and the things I mentioned above.

It was fun. All the characters in Xander’s Tangled Web have a quirky sense of humor. Take his cousin, Frawl, for example. We all know someone like him.. He has the bad habit of saying what he thinks. He’s a riot when he’s three sheets to the wind, but even then he knows better than to make the mistake of crossing Xander’s wife, Suse. There’s Phineas, Xander’s loyal friend who has a fondness for bawdy tavern songs and a band of gypsies.

Besides humor, Xander’s Tangled Web has romance, and mystery. Xander takes on the daunting job of trying to find out what happened to Princess Mena. The story takes place in the small town of Battington, where news travels fast. People know everything about everyone…or think they do. And while there’s a kernel of truth to every story, sorting it out is what makes it difficult.

Everybody loves Xander. And why wouldn’t they? He’s a good listener. Loyal and honest to a fault. You couldn’t ask for a better husband. He’d do anything for Suse. That’s why he agrees to investigate Princess Mena’s disappearance. So he can afford to get his wife some of the things she deserves.

There’s a little piece of me in every story I write. The way a character reacts. The way he or she says things I’m thinking. The things I’d do if I were in the same situation. Drawing on my experiences or those of someone I know to write about each of those things helps to make the story real..

I love everything about the writing process. Getting the reader’s attention. Taking them to the place I want the story to happen. Making them laugh. Making them cry. Letting the story unfold. Twisting. Turning. Bringing it all together in the end. It’s magic.

Born in west Texas and raised in south Texas, Susan shares a 100-year-old farmhouse in a small east Texas town with a ghost who likes to harmonize with her son when he plays guitar.

Mother to three children and their spouses, she enjoys 5 unique and special grandchildren. Her family is rich with characters, both past and present. Her grandmother shared stories of living on a farm in Oklahoma Territory and working as a telephone operator in the early 20th century.  She learned about growing up during the depression from her father and experienced being a teenager in WWII through her mother’s eyes.

Susan loves taking her readers through all kinds of exciting adventures. So far, she’s written two books in her It’s About Time series, Not Long Ago and From Now On. They are time travel adventures about two people who fall in love despite the fact they come from very different worlds. In My Own Shadow is a Fantasy adventure/romance. Xander’s Tangled Web is a YA fantasy with romance.

Want to know more? Visit Susan’s website for a peek inside this writer’s mind and see what she’s up to. You never know what new world she’s going to visit next.

Click the images or titles to go to Amazon 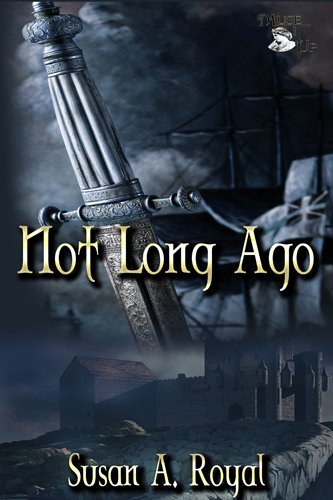 While doing research for a novel set in the Middle Ages, Erin and her employer, March, are transported to a time where chivalry and religion exist alongside brutality and superstition. Things are not quite right at the castle, and Erin and March feel sure mysterious Lady Isobeil is involved. Erin must cope with crop circles, ghosts, a kidnapping and death before the truth of her journey is revealed.
Forced to pose as March’s nephew, Erin finds employment as handsome Sir Griffin’s squire. She’s immediately attracted to him and grows to admire his courage, quiet nobility and devotion to duty. Yet, she must deny her feelings. Her world is centuries away, and she wants to go home. Despite that, Erin can’t stop thinking about her knight in shining armour.

Griffin has traveled across centuries to reunite with the woman he loves, but he and Erin may not get their ‘happy ever after’. Not if Lady Isobeil has anything to do with it. She forces Griffin to leave Erin behind and travel to eerie Manx Island. When he goes missing, Erin and his friends set out to find him. Followed by his strong-willed sister, Kateryn, they ride to Swansea and secure passage with the notorious Captain Akin.
Erin sees firsthand how the island earned its dark reputation when she battles freakish weather, encounters a race of little people known as “Prowlies”. She experiences ghosts of the long departed and discovers the “ley lines” crossing the island’s mountain peak that make time travel possible. Yet these obstacles pale in comparison to the secrets Erin uncovers while determined to rescue the man she loves.

After a late night visit to Battington’s marketplace, Princess Mena vanishes without a trace. Merchants are frantic, because King Leander has called for a curfew and postponed the Spring Festival until further notice. Certain his former constable is the man for the job, the mayor hires Xander to investigate, hoping he can solve the mystery in a hurry so things can go back to normal.
But Xander’s not so sure that’s possible, because there’s romance involved, and he knows when that happens folks who are normally very sensible seem to lose all reason. In addition to sorting out truths, half-truths and outright lies, he must deal with gypsies, love potions and an illegal moonshine operation before he gets to the bottom of things.

Sue Vincent is a Yorkshire-born writer and one of the Directors of The Silent Eye, a modern Mystery School. She writes alone and with Stuart France, exploring ancient myths, the mysterious landscape of Albion and the inner journey of the soul. Find out more at France and Vincent. She is owned by a small dog who also blogs. Follow her at scvincent.com and on Twitter @SCVincent. Find her books on Goodreads and follow her on Amazon worldwide to find out about new releases and offers. Email: findme@scvincent.com.
View all posts by Sue Vincent →
This entry was posted in Books, fantasy, fiction, Guest post, writing and tagged humour, mystery, paranormal, romantic fiction, SciFi, YA. Bookmark the permalink.