Solstice of the Moon: the Battle Stone

The road carried us towards Forres, on the way to Inverness. We were, fairly predictably, on the trail of a stone. Not just any stone, though, this one is rather special. It is also quite a large one…though quite how large we did not realise until we parked the car and stood looking up at the thing. At twenty-one feet, it is the tallest carved stone of its kind in Scotland. 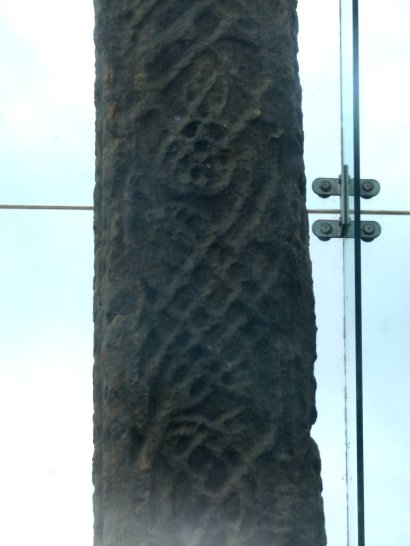 Sueno’s Stone stands at a crossroads where three roads meet.Legends tell that it was on this spot that the infamous witches met Macbeth, and their spirits were imprisoned within the stone, waiting to be released should it ever be broken. The only problem is that   Shakespeare wrote Macbeth  many centuries after the stone was first raised, but it does give a good reason for the glass case in which the stone now sleeps.

Another and more plausible legend suggests that the stone marks the death of Dub mac Maíl Coluim, king of Alba, who was killed by the Scots in 967 and that the stone was erected by his brother, Cináed mac Maíl Coluim. No-one really knows for sure who is really represented here, but what is certain is that while one side depicts an interlaced Celtic Cross, the other depicts a battle scene in surprising and gory detail.

Archers, swordsmen and horses in serried ranks are accompanied by piles of  severed heads, including one that seems to be singled out from the rest, beneath the arch of a structure and encased in a square frame as if it is of more importance than all the others.  It has to be that of a battle chief or king, one would think. Dating back to the ninth or tenth century, it does make you wonder about its story. It must have been seen as a magnificent victory or a dire loss to warrant such a monument.

We were not, it seemed though, going to get a great deal of time to ponder the stone or its stories. Almost as soon as we arrived, so did a coach-load of tourists, all laughing and talking and just as intent on taking in this ancient wonder as we were. Outnumbered, we retreated to read the information panel and allow them to get their photographs… we, at least, were not time-constricted and could wait, and the stone has been waiting patiently for well over a thousand years.

Sue Vincent is a Yorkshire-born writer and one of the Directors of The Silent Eye, a modern Mystery School. She writes alone and with Stuart France, exploring ancient myths, the mysterious landscape of Albion and the inner journey of the soul. Find out more at France and Vincent. She is owned by a small dog who also blogs. Follow her at scvincent.com and on Twitter @SCVincent. Find her books on Goodreads and follow her on Amazon worldwide to find out about new releases and offers. Email: findme@scvincent.com.
View all posts by Sue Vincent →
This entry was posted in Ancient sites, historic sites, Photography, Scotland, scotland road trip, Solstice of the Moon, Stuart France and Sue Vincent, symbolism and tagged archaeology, art, carved stone, celtic cross, Forres, history, Inverness, Pictish symbol stones. Bookmark the permalink.

6 Responses to Solstice of the Moon: the Battle Stone