Solstice of the Moon: Graven Images

Our last visit of a weekend that seemed to have flown by all too quickly was to a little church on the edge of Aberdeen. The sun finally decided to show its face… though it still managed to rain anyway, but at least we had blue skies through the roofless ruins of St Fergus’ Church. 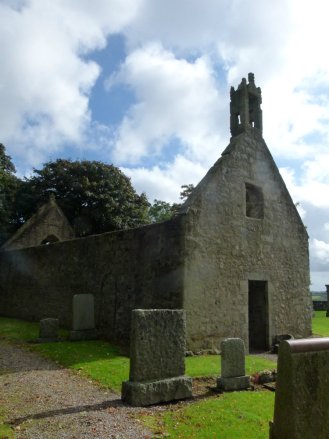 Originally built around eight hundred years ago, the old parish church of Dyce sits high above a bend in the river Don. It was a place of Christian worship long before the present church was built…and possibly already a sacred or significant site in the pre-Christian era. Little now remains of the church apart from its shell, with the curious doorway to the east, where the altar would normally be situated.

Fergus the Pict was an Irish bishop, responsible for bringing Christianity to many in this area of Scotland. He may be the same Fergus who took part in the council of Rome in 721AD that condemned ‘irregular marriages, sorcerers and clerics who grew their hair long’.

Outside the door is a pedestal carved into a bowl that looks like the remains of an ancient font. Local legend says that it is a penitent’s seat, in which the lawbreakers of the community were obliged to sit as the congregation filed past. Within the church, there is nothing much left of interest except a few carved stones.

Some of them are much older than the church and have been reused as part of its fabric. On one of them, visitors have left a small white stone. The reason for this is unknown to me. Is it a pagan or Christian practice? Does it relate to the presence of the Commonwealth graves within the churchyard? The only parallel I can think of is one Barb had mentioned, the Jewish custom of placing a stone on a grave, though we too had been placing stones at sacred sites as a symbol and prayer for peace.

Sue Vincent is a Yorkshire-born writer and one of the Directors of The Silent Eye, a modern Mystery School. She writes alone and with Stuart France, exploring ancient myths, the mysterious landscape of Albion and the inner journey of the soul. Find out more at France and Vincent. She is owned by a small dog who also blogs. Follow her at scvincent.com and on Twitter @SCVincent. Find her books on Goodreads and follow her on Amazon worldwide to find out about new releases and offers. Email: findme@scvincent.com.
View all posts by Sue Vincent →
This entry was posted in adventure, Ancestors, Ancient sites, archaeology, Art, Dreams, historic sites, Photography, Sacred sites, symbolism, travel and tagged Aberdeenshire, Dyce, history, Pictish symbol stones, scotland road trip, standing stones, stone circles. Bookmark the permalink.

2 Responses to Solstice of the Moon: Graven Images