Solstice of the Moon: Unfamiliar Territory 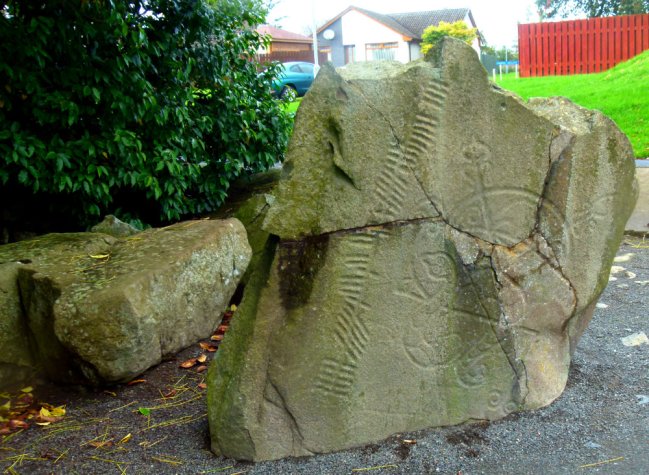 It is raining again and about to get worse. You are in a suburban green space between neat-gardened houses, the last place you would expect to find an ancient treasure… and you are confronted with something both so alien and so hauntingly familiar, that it stops you in your tracks. A carved stone, covered in symbols, strange incisions and fantastic creatures. You have absolutely no idea what it may mean… no frame of reference… no starting point for comprehension. Yet somehow, it is not only familiar from all those pictures in books, but it feels as if you really should know how to read it.

The stone is one of the many Pictish symbol stones that dot the landscape. It is far from the best example, being both broken and weathered. The Brandsbutt Stone was found in pieces, used as part of the construction of a farm dyke and wall. Close by are two large stones, thought to be from a stone circle that stood there until it was levelled a couple of hundred years ago, before we began to value our ancient heritage and after it had lost the respect and awe it had once inspired. It is worth noting that even today there are ancient monuments that are being destroyed through lack of care, inept officialdom and the worship of the great god Mammon.

The Brandsbutt Stone may once have been part of that ancient complex, though that is far from certain. While the now-missing stone circle would have dated back four to six thousand years, the carvings date back a mere fifteen to twelve hundred years. The Picts, the ‘painted people’, inhabited this area in the Late Iron Age through to the early medieval period and, although they themselves left no written record of their lives, they did leave many carved stones from which we can learn a good deal about them. Not all of them are as enigmatic as this one; some have scenes of battles, some tell stories, and some marry the symbols of an older time with those of the new religion of Celtic Christianity. 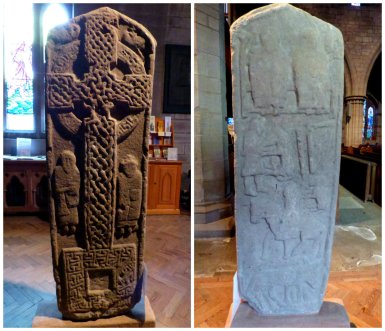 We had come across a few Pictish stones on our last foray into Scotland, most notably the carvings and the Cross at Brechin with its ‘indeterminate figures’, its eight-legged horse and unfortunate explanations… There too, the marriage of old and new was still apparent, even though the stone is thought to be only a thousand years old.

The human figures are easier to understand, even though we may argue over the interpretation of the stories they represent. The Symbol Stones, though, are another matter. To even begin to have a hope of understanding them, we must leave the familiar thought processes of a literate society behind and go back to our earliest ancestral forms of written communication.

How can you write before there is standardised written language or when regional dialects differ? Or when no-one knows how to write… or read?

Sue Vincent is a Yorkshire-born writer and one of the Directors of The Silent Eye, a modern Mystery School. She writes alone and with Stuart France, exploring ancient myths, the mysterious landscape of Albion and the inner journey of the soul. Find out more at France and Vincent. She is owned by a small dog who also blogs. Follow her at scvincent.com and on Twitter @SCVincent. Find her books on Goodreads and follow her on Amazon worldwide to find out about new releases and offers. Email: findme@scvincent.com.
View all posts by Sue Vincent →
This entry was posted in adventure, albion, Ancestors, Ancient sites, archaeology, History, mystery, Photography, Scotland, Spirituality, travel and tagged Balquhain recumbent circle, Brandsbutt Stone, history, Inverurie, Photography, Pictish symbol stones, Scotland, workshop weekend, writing. Bookmark the permalink.