A family of dogs

The first was a dog I never even knew. His name was Paddy and his life ended before mine began. My mother wrote his story once and sent it off to her publisher. It was returned with a note saying that it was a beautiful tale… it had made the office smile and weep in turn… but it was ‘too far fetched’ to be suitable for publication.

It told of a stray dog who had wandered into the lives of my grandparents when they were a newly married couple. They had bought a neat little house in which to set up home and, in spite of the onset of war, they soon became a family.  My mother was born, Grandad was sent to fight in Burma and Paddy moved in to take over the care of the family.

In spite of the hazards of war, the world was, in many ways, safer and simpler. Paddy would take the basket to the shops and bring home the necessities. He would watch over my mother and, in later years, collect her from school. During the war years, he made it his business to make sure she was taken safely to the air-raid shelter when the sirens sounded and stayed by her side until the all-clear. Even so far north of London, this was not an empty precaution… in March, 1941, an incendiary bomb fell on the house and the scars, like the shelters, still remained into my own childhood. 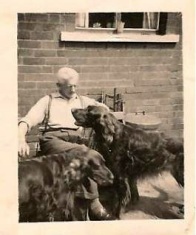 There were dogs around when I was born… my great grandparents had a house full of Irish setters. Rory was a great, gorgeous creature always ready to laugh and play. Bonnie, his sister, was a pretty, delicate fairy of a girl, while Meg, their mother, already touched with  grey around the muzzle, mothered us all impartially.

My own first dog was Kim, a German shepherd. Kim was not really ‘mine’ as I was tiny at the time, and we did not have him for long. My mother was devastated when he was killed by the number 77 bus. After that, and with married quarters, it was not until after I started school that Sandy came into my life. By this time, we were living with my grandparents. Sandy was a collie/labrador cross who became my friend on the day my grandfather picked me up from school with the soft little puppy in his arms. Sandy did not have an easy time, and had to be nursed through months of illness, but he lived to a ripe old age.

My first real experience of grief was when Rory died. I had lost one of my great-grandmothers, but had been too young at the time to be aware of more than the grown-ups reaction to her passing, though I remember the scene vividly. She was someone I barely knew, but Rory was my friend. I will never forget great-grandad coming to tell us in person, his handsome old face streaked with tears. Meg went soon afterwards and Bonnie did not survive them for long… I don’t think they knew how to live without each other and, at the time, I felt equally lost without their presence.

There were no more dogs for a good many years, not until I was thirteen and came home to an offhand comment from my mother. “There’s a fur on your bed…” Thinking it was a new ‘fun-fur’ coat that was all the rage, I dumped my school bags and ran upstairs… and found the German shepherd pup we named Sheba. I cuddled her all night… and we deflea’ed the pair of us next morning.

We moved to an isolated property where Sheba was joined by Cindy, a lurcher. By this time, Sheba was a huge, menacing creature, who stood almost as tall as me on her hind legs.  She would attack the fence to warn any passers-by to stay away… and yet would let my two-year-old brother drag her in by the tail. Cindy was found bound, starved and discarded… my mother put her in the pushchair with my little brother and brought her home. We did not think she could survive the wounds and starvation, but Sheba lifted her and made her eat. The two were inseparable until tragedy struck. Sheba was shot by boys playing with a pellet gun. The pellet lodged in her brain and her fits were dangerous. The vet said we had no choice.

There was no chance to have a dog for a good many years after that as I married and left home. There were occasional cats, Fred, the guinea pig, the odd bird… but no dogs. My mother always had dogs, my boss in France had a dog, Bilbo, who filled the gap until he was kidnapped, and my mother-in-law had a poodle who changed my opinion of the breed for the better. But it was not until my sons were in their teens that I was able to share a home with dogs again.

Molly, rescued from the most appalling circumstances, and Echo, my laughing girl…a gift of love given in grief… joined us after the death of my partner. Their presence healed my heart and their loss broke it. I never thought I would have another dog.

And then, unexpectedly, there was Ani…

Ani is the latest, and perhaps she will be the last, to bring the gifts of love, companionship and simple joy into my home. She was acquired from a rescue to be an assistance dog for my son, following Paddy’s lead. But my son recovered far better than we could ever have hoped and Ani stayed with me.

I have learned so much from loving and living with dogs. Their presence has filled my days with laughter and an example of joyful living in this moment. Watching some of them recover from the most appalling treatment has taught me how to accept and how to forgive. I learned from them how to grieve and how to live with happy memories instead of the weight of loss. And, perhaps most importantly, I have learned that the love that wants nothing for itself can heal almost anything. 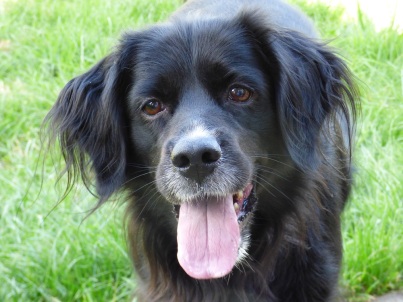 Sue Vincent is a Yorkshire-born writer and one of the Directors of The Silent Eye, a modern Mystery School. She writes alone and with Stuart France, exploring ancient myths, the mysterious landscape of Albion and the inner journey of the soul. Find out more at France and Vincent. She is owned by a small dog who also blogs. Follow her at scvincent.com and on Twitter @SCVincent. Find her books on Goodreads and follow her on Amazon worldwide to find out about new releases and offers. Email: findme@scvincent.com.
View all posts by Sue Vincent →
This entry was posted in Dogs, family and tagged abandoned dogs, Animals, childhood, Dogs, love, pets, rescue dogs. Bookmark the permalink.

121 Responses to A family of dogs