“I need to update you on bent-tail fish,” said my son down the phone. This could not be good. Poor bent-tail has been struggling with his infirmities for a while and we knew it could be only a matter of time. “The cat came in wet and it wasn’t raining… so I checked the pond.” Even worse then. The cat has seen bent-tail as prey for a while and, when he is exhausted and floating on the surface, the little fish makes an easy target for the feline huntress. I had visions of coming back from the north to a half-eaten fish and a well-fed cat. “I don’t know,” said my son, “whether the cat jumped or fell…but she was soaked… and bent-tail is fine.” I’m afraid that I grinned. Another round goes to the fish. It is, in spite of its less-than-usual shape, both resilient and resourceful… and the same can be said of my son.

Oh yes, he added, he had something to show me… but I would have to wait until I got home from the north… That sounded exciting. I wrote last week about his latest venture. After the initial experimentation that yielded the whole jittery duck saga, my son launched himself seriously into learning how to paint digitally. Nick’s hands cannot manipulate a traditional paintbrush with any accuracy. His dexterity was severely reduced by the insertion of a screwdriver into his brain with enough force to shatter his skull and the miracle is that he can do anything at all. Many of my readers know his story, so I will not repeat it; those who do not can read his story here in his own words. Between the initial injury and the way his brain swelled and bled, Nick’s body was damaged beyond repair. So was his sight. It is not just holding a paintbrush that should be beyond his skill, but he is as resilient and as he is resourceful; what he cannot do by the usual means, he will look for some way to do differently.

While he may not be able to wield a paintbrush, he can use a computer and with the advent of digital art, creativity can be unleashed, so Nick has spent the past few weeks learning his way around new software and experimenting. Digital art packages vary from the simple to the sophisticated. Some are merely automated tools that transform photographs into the semblance of art, others offer a set of virtual brushes and tools that allow you to paint from the imagination.

When the first such programmes came out, I was wary… was this art or just an acquired skill? Having watched my son and played with the programmes myself, I know that they can be used as either, but when you begin with a blank canvas, creating something new from your imagination that expresses part of your own being, then it is art.

I was curious to see what he had done. His photography alone has shown that he has an artistic streak. Even so, I admit that I was expecting something along the lines of a simple landscape as a first painting. The biggest fear with any new venture is that you will be unable to achieve your goal. For Nick, that fear carries the added weight of his injures… no matter what he may be capable of dreaming, his body may refuse to cooperate. Having the right tools for the job helps immeasurably and Nick has a talent for finding the technology that will allow him to surpass the limitations of his injuries. By using weird and wonderful contraptions that we invented in the kitchen, my son was able to use exercise equipment and regain strength and some control over his body. By finding a recumbent bike, he was able to ride again and raise money for charity. By working across a number of different platforms, he has found a way to express his creativity. And in doing so,  he has made me very proud. Again. 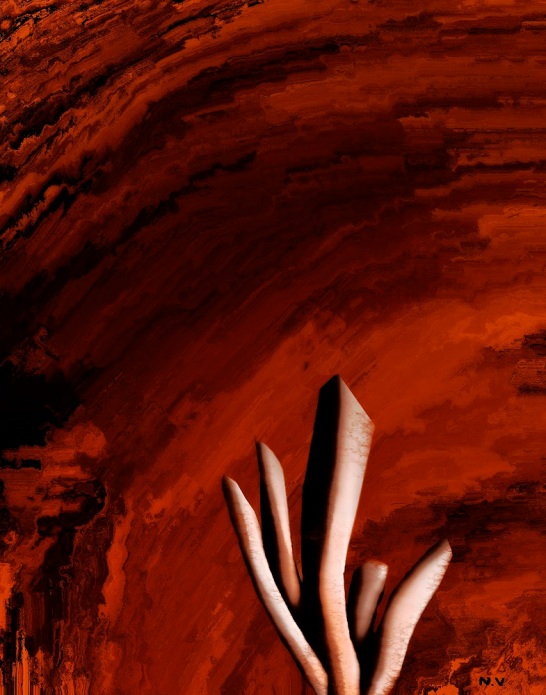 I am still trying to raise the funds to help pay for a new, off-road wheelchair for my son. The Mountain Trike allows Nick to go places he has been unable to go for over seven years. Please help if you can, either by donating to the Go Fund Me campaign or by sharing his story. You can read more about Nick by following the links by searching this site or on his own blog.

Sue Vincent is a Yorkshire-born writer and one of the Directors of The Silent Eye, a modern Mystery School. She writes alone and with Stuart France, exploring ancient myths, the mysterious landscape of Albion and the inner journey of the soul. Find out more at France and Vincent. She is owned by a small dog who also blogs. Follow her at scvincent.com and on Twitter @SCVincent. Find her books on Goodreads and follow her on Amazon worldwide to find out about new releases and offers. Email: findme@scvincent.com.
View all posts by Sue Vincent →
This entry was posted in Art, Nick Verron and tagged creativity, digital art, painting, self expression. Bookmark the permalink.