Independent motion – can you help? 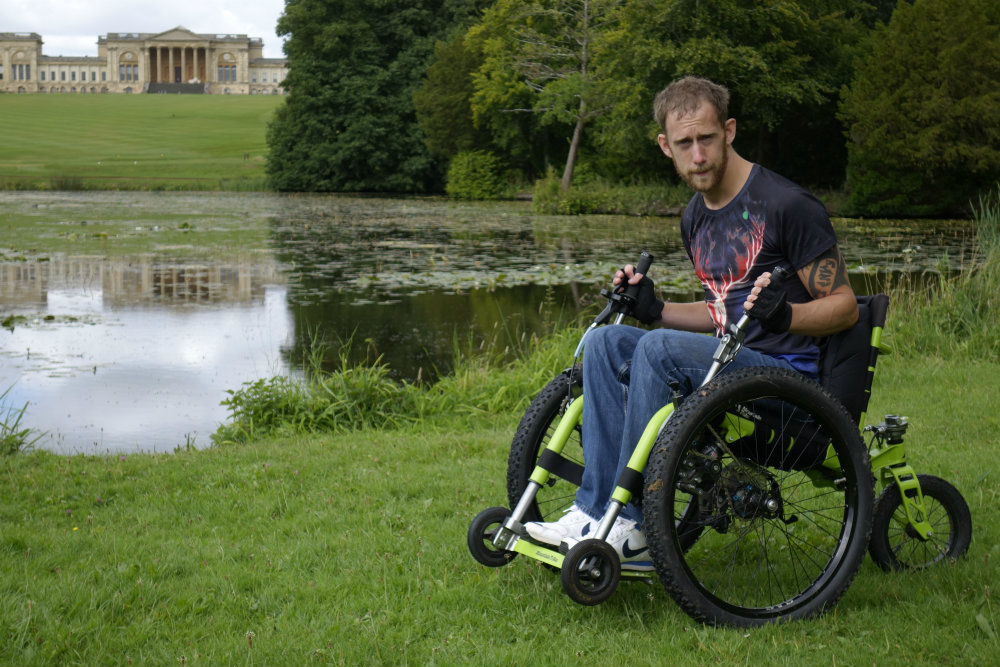 What would you give to make a dream come true if you woke to find yourself living a nightmare?

What would you feel if you could never again walk on a beach? Or go out alone in the snow…feel the stillness of a wood or cross a field?

And then, you found a way…

In 2009, my son was a successful young man with a bright future… until he was stabbed through the brain in an unprovoked attack and left for dead in an alley.

He was found almost immediately by passers-by who saved his life. By the time we arrived at the hospital, Nick was being prepared for emergency brain surgery. We were allowed to see him, for a few minutes, to say goodbye. He was not expected to survive…

Over the past couple of years, many in the blogging community have come to know my son and know that survive he did, defying all the odds and going on to achieve wonderful things in spite of the physical challenges with which he lives. You may remember the magic of May Day. Or perhaps his skydive… the London to Brighton cycle ride… or the Triathlon, all of which raised thousands of pounds for charity.

Some of you follow Nick’s blog and, though he has been quiet recently, will have read about the reasons for that as he prepares for the biggest adventure yet, doing the impossible once again and proving that ‘impossible’  really isn’t, if you set your mind and heart to something.

One of the biggest problems for Nick going travelling is getting around. As he cannot see well enough to drive a car and cannot walk, he has to use a wheelchair. The trike allows Nick to get out and about, but it is specialist equipment (he’s been waiting all summer for parts to fix it) and too big to transport. He is also limited to decent road surfaces. He cannot self-propel in a normal wheelchair (except in circles) because of the reduced mobility and coordination down his entire right side, so he has to use a large and heavy electric wheelchair that causes many transport problems, can break down and means carrying heavy chargers and batteries that airlines don’t like. And it can’t manage a small step or a high kerb. This has been the biggest sticking point and looked set to prevent his dream from coming true. The only other alternative has been a manual wheelchair and someone to push it.

Until we came across the Mountain Trike.

He hired one to try it out. This is a serious piece of kit… a cross between a mountain bike and a wheelchair, it can go off-road and up mountains. It can handle sandy beaches, ford streams and cope with muddy tracks and cobbles. And it is a manual wheelchair with an innovative propulsion system that Nick can use, even with reduced mobility. It doesn’t need batteries, can be fixed by most bike shops in an emergency and, crucially, doesn’t need anyone to push it. He can go out into the wild places alone for the very first time in seven and a half years.

It even has a luggage rack.

Nick is giving all he has to fund his dream of travelling. I have set up a Go Fund Me page for him to try to raise the cost of buying the Mountain Trike. It will change his world and open the world to him.

You can visit the campaign page HERE and read the full story.

Please help if you can, by donating if you can or, if you can’t…and not everyone can… by sharing his story and the campaign.

You can also Pin Your Tweet to help get the word out too!

If you have any difficulty donating via the campaign page, please contact me at findme@scvincent.com.

Sue Vincent is a Yorkshire-born writer and one of the Directors of The Silent Eye, a modern Mystery School. She writes alone and with Stuart France, exploring ancient myths, the mysterious landscape of Albion and the inner journey of the soul. Find out more at France and Vincent. She is owned by a small dog who also blogs. Follow her at scvincent.com and on Twitter @SCVincent. Find her books on Goodreads and follow her on Amazon worldwide to find out about new releases and offers. Email: findme@scvincent.com.
View all posts by Sue Vincent →
This entry was posted in adventure, Nick Verron and tagged disability, Mountain Trike, Off-road wheelchair, surviving brain injury. Bookmark the permalink.

225 Responses to Independent motion – can you help?