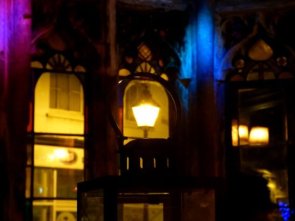 Aunt Betty kept it burning. For years after the war had ended she kept the lamp lit in hope she said, always in hope.

The long years of war had ended. For Aunt Betty those were years of agony, of inner turmoil as she waited for her husband to return.

While around her news arrived daily of the death of a neighbour’s loved one she held steadfastly to the belief that her man would come home.

As long as there was no word to say otherwise she hung on to the hope of him coming one day back to her.

In the years after the war there was hope that he might have been captured and would soon to home. Then she thought maybe he was injured and has lost his mind. Maybe she thought he has been so badly hurt he couldn’t face coming home to her.  There were men she had heard who preferred to live in obscurity rather than face their families since they had been so badly damaged.

So my Aunt kept the lamp alight, hope like the light shone out into the darkened sky.

Sue Vincent is a Yorkshire-born writer and one of the Directors of The Silent Eye, a modern Mystery School. She writes alone and with Stuart France, exploring ancient myths, the mysterious landscape of Albion and the inner journey of the soul. Find out more at France and Vincent. She is owned by a small dog who also blogs. Follow her at scvincent.com and on Twitter @SCVincent. Find her books on Goodreads and follow her on Amazon worldwide to find out about new releases and offers. Email: findme@scvincent.com.
View all posts by Sue Vincent →
This entry was posted in photo prompt, Photography and tagged family, hope, love, memory, story, survivors, war. Bookmark the permalink.