We had arrived in the north, checked in at our accommodation, and, after a coffee, as we still had a couple of hours to spare before we were all to meet, we decided to stretch our legs and explore a little of the village where we were staying. The pub in Beadnell, The Craster Arms, would have to be visited at some point, especially as it is housed in a sixteenth century pele tower, whose five-feet-thick walls were designed for the watch tower to warn of approaching danger, and as a refuge when it arrived. 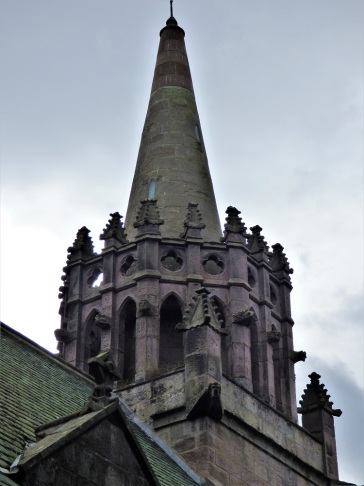 With the Walk and Talk weekend ahead, we stayed clear of the inn; these things need to be approached with a clear mind. Instead, we admired the cottages and old manor houses as we headed for the rather unusual church.  The tower alone was worth a look, sporting, as it does, an octagonal pierced stone screen at the base of the spire. But what struck us most was the arch of the door that was decorated with poppies and beside it flies a flag that reads simply, ‘Lest we Forget’.

It would be difficult to forget that this year marks the centenary of the Armistice, the end of the first World War. Across the country, poppies are blazing in every village church and by the roadside, in town and country, are silent silhouettes, the almost-lifesize representations of those who served in that terrible conflict. We had seen many of them on our journey, and they are deeply moving when you see these lone shadows in the green land they gave their lives to protect. “The war to end all wars” was just another chapter in the violent history of mankind, and it was sobering to reflect that our weekend would revolve around medieval structures whose primary purpose was might.

The church is dedicated to St Ebbe, a sister of the saintly King Oswald, whose relics had once been housed in the area. It is a fairly modern building, dating from 1746, with renovations in 1860. It was built to replace the original chapel, founded by St Æbbe herself in the seventh century, which had fallen into ruins by that date. 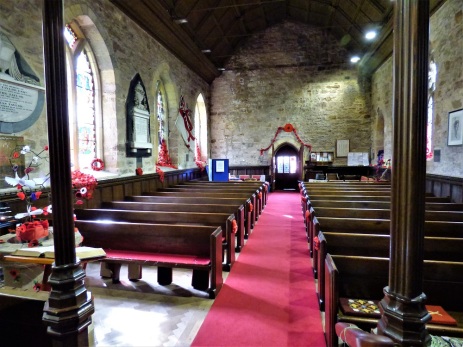 It is a simple, small church, exuding warmth from the pink-tinged stone and welcome from its door which, as far as we could see, even stood open at night, with the sanctuary light casting its glow through the stained glass of the east window. It would be a beautiful little place at any time and well worth a visit, but this year, the parishioners have done something remarkable as an act of communal remembrance.

Every window weeps poppies, each one hand made, knitted or crocheted, each one telling a story. There are red poppies for the soldiers who fought and died in the trenches and on the battlefield.

Sue Vincent is a Yorkshire-born writer and one of the Directors of The Silent Eye, a modern Mystery School. She writes alone and with Stuart France, exploring ancient myths, the mysterious landscape of Albion and the inner journey of the soul. Find out more at France and Vincent. She is owned by a small dog who also blogs. Follow her at scvincent.com and on Twitter @SCVincent. Find her books on Goodreads and follow her on Amazon worldwide to find out about new releases and offers. Email: findme@scvincent.com.
View all posts by Sue Vincent →
This entry was posted in Churches, History, mankind, Photography, Stuart France and Sue Vincent, The Silent Eye, war and tagged armistice, Beadnell, pele tower, remembrance, St Ebbe's church, World War. Bookmark the permalink.

2 Responses to North-easterly: Sidetracked by Poppies…