We waited for a few minutes while our small group took pictures of the stones of Stonehenge. It is rare to be able to photograph the monument without hordes of people, but with the gates closed to the general public, calm descends. We were all waiting to be allowed within the circle of stones, but I wondered how many had realised that we had actually been within Stonehenge itself for quite some time.

The remains of the outer embanked ditch, situated outside the normal visitor path and often overlooked.

Over five thousand years ago, our ancestors created a circular ditch and embankment, some three hundred and sixty feet in diameter. It was dug out using antler picks, and yet, curiously, they buried animal bones, flint tools and antlers of a far greater age in the bottom of the ditch itself. These were not simply old things that they had cast away, they were placed there with care after being looked after for many years. Why such reverence? What did these animals represent for the diggers of the ditch? Were they perhaps invoking the guardianship of the clan’s Spirit Animals… or that of the Ancestors themselves? As the bones belonged to deer and oxen, perhaps they were attempting to ensure that the herds were kept safe and plentiful, and that their bounty would serve the clan’s needs.

It was not until the seventeenth century, that antiquarian John Aubrey discovered fifty-six pits, arranged around the inner edge of the ditch. These became known as the Aubrey Holes. In 1920, the early days of modern archaeology, William Hawley excavated over fifty thousand bone fragments, dumping them unceremoniously together into one of the Aubrey Holes, as being of no importance. 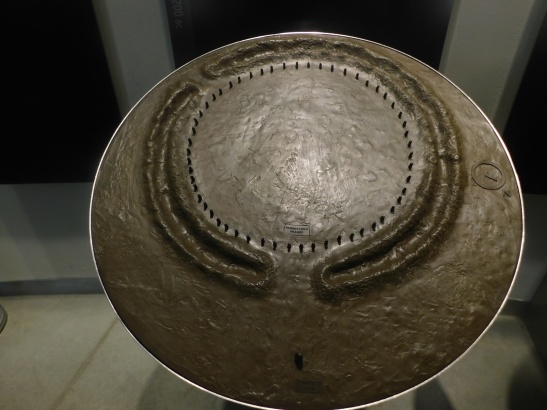 Scale model showing the embankment and ditch, within which the Aubrey Holes hold the bluestones. Image: Stuart France

The bones belonged to sixty three men, women and children, each of whom had been cremated and their remains interred with meticulous care. In 2013, Mike Parker Pearson and his team brought more rigorous modern methods to bear on the bones and the pits, finding that each pit may have held a bluestone, which they suggested may have been as a grave marker. I have to wonder at that…

The bluestones are not the huge trilithons, but substantial pillars of stone that now form the inner circle. They were famously quarried and carried to the spot from Wales, over a hundred and fifty miles away. This discovery meant that the first ‘stone circle’ at Stonehenge was possibly five hundred years earlier than had been thought. Not only that, but analysis of the bone fragments showed that most of those buried had lived most of their lives in Wales… not on the Plain around Stonehenge.

Sue Vincent is a Yorkshire-born writer and one of the Directors of The Silent Eye, a modern Mystery School. She writes alone and with Stuart France, exploring ancient myths, the mysterious landscape of Albion and the inner journey of the soul. Find out more at France and Vincent. She is owned by a small dog who also blogs. Follow her at scvincent.com and on Twitter @SCVincent. Find her books on Goodreads and follow her on Amazon worldwide to find out about new releases and offers. Email: findme@scvincent.com.
View all posts by Sue Vincent →
This entry was posted in albion, ancient mound, Ancient sites, archaeology, History, Photography, Sacred sites, The Silent Eye and tagged alignments, earth energies, energy, icon, megalithic, Sacred landscapes, stone circle, stonehenge. Bookmark the permalink.