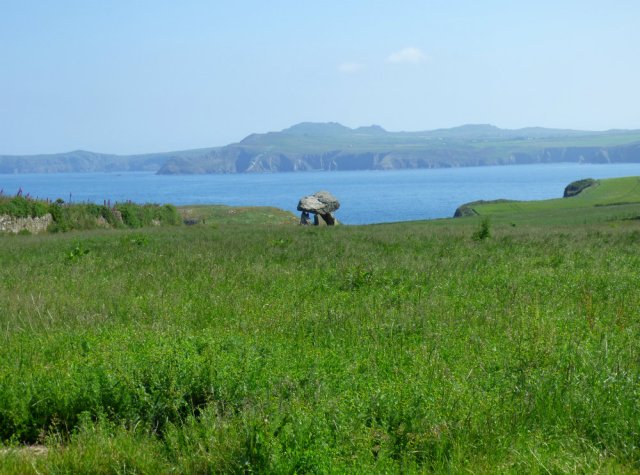 The jaws had dropped, the expletives had escaped and the cameras were out almost as soon as we exited the car. Even from a distance, Carreg Samson was spectacular, set against the backdrop of the coast… a smiling dragon resting his maw on folded wings as if he was casually looking over the cliff top at the approaching party. We should have expected dragons in Wales, but we could never have expected this. 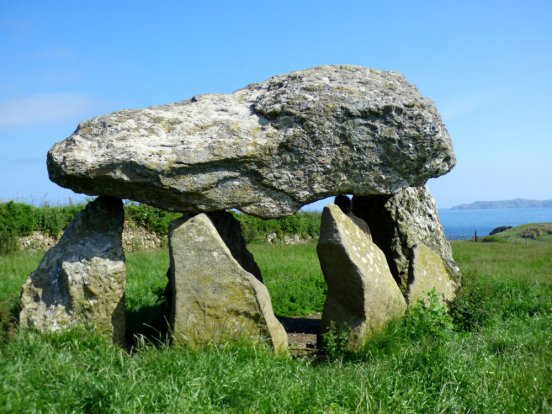 Even at close quarters, the resemblance remained. We had dutifully noted that, from the correct approach, the contours of the great head seemed to shadow the shape of the headland beyond. The location alone is stunning and the stones are simply enormous. The capstone is over fifteen feet long, nearly nine feet wide and over three feet thick. There is plenty of headroom to stand beneath it. When you consider that the legends say that St Samson lifted the capstone into position with his little finger, you can only imagine that the Welsh saint had been well named… and a giant. 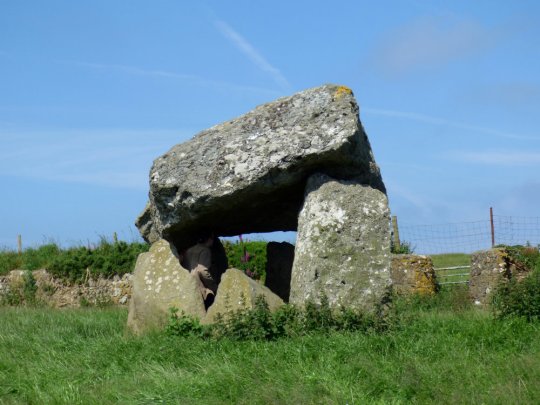 Whether through soil subsidence over the five thousand years since it was built or, more likely by design, the capstone is only supported by three of the six remaining orthostats. The stones are different in colour and texture, the supporting stones rich with veins of quartz… and stone was the technology and the artistry of the builders, I doubt that they would make such choices without reason. There are several outliers still half hidden in the grass. 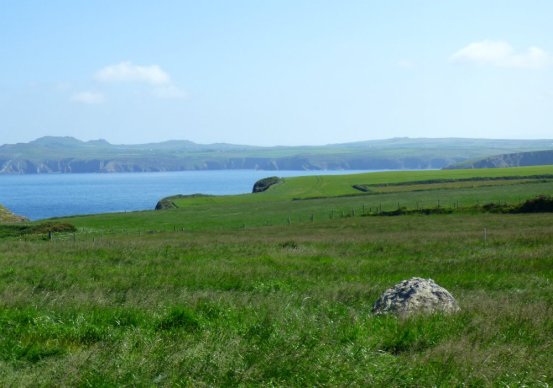 Excavations showed that there were once four more stones… one support and three that may have formed a passage into the tomb from the southeast. They also found that the tomb was built over a deep, rubble-filled pit. Burnt bone, sherds of pottery and worked flints were also found. Like Coetan Arthur, there is debate over whether or not this tomb ever wore an earthen mound. Be that as it may, at some point in its history, local shepherds had used loose stone to block the gaps in the walls and had used the tomb as a sheep shelter. I wonder what the dragon had thought about that… I have never imagined dragons as herbivores. Even from the other side, the head neck and serene smile are visible.

Sue Vincent is a Yorkshire-born writer and one of the Directors of The Silent Eye, a modern Mystery School. She writes alone and with Stuart France, exploring ancient myths, the mysterious landscape of Albion and the inner journey of the soul. Find out more at France and Vincent. She is owned by a small dog who also blogs. Follow her at scvincent.com and on Twitter @SCVincent. Find her books on Goodreads and follow her on Amazon worldwide to find out about new releases and offers. Email: findme@scvincent.com.
View all posts by Sue Vincent →
This entry was posted in adventure, albion, Ancient sites, archaeology, Don and Wen, History, Photography, travel and tagged chambered tomb, Coetan Arthur, cromlech, druid, Iolo morganwg, OBOD, pembrokeshire, prayer, Samson, Wales. Bookmark the permalink.