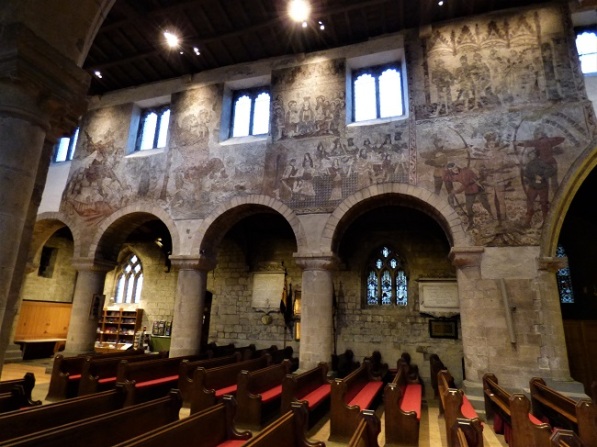 It hits you as soon as you open the door… the towering figures of St George and St Christopher draw your eyes. On our first visit, we’d had no idea what we would find when we stepped inside, but even knowing what awaited us did not lessen the sense of awe and amazement. 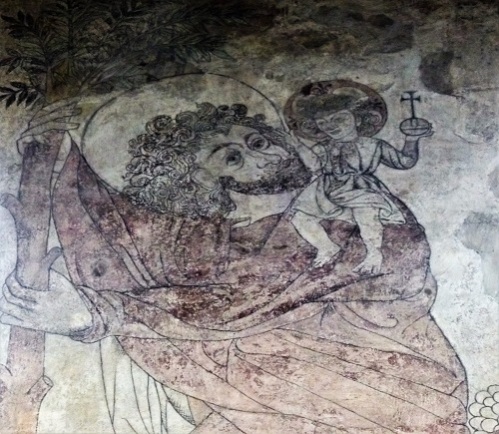 The walls of the nave are almost completely covered with mediaeval wall paintings. It is one of just a handful of churches in the country where almost the full sequence of such paintings can still be seen.

The paintings were commissioned round 1450 and were completed within ten years, but they fell victim to the Protestant Reformation less than a hundred years later and were whitewashed over. They were rediscovered by accident in 1852 when plaster fell from the walls. The vicar, Reverend F. Ponsonby, had them uncovered, but did not like the paintings. He had them sketched for posterity then, in spite of protests from the Archbishop of York, had them painted over once more. 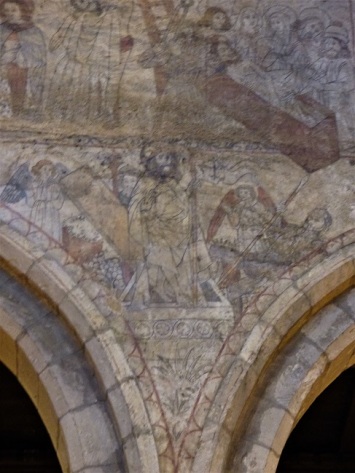 It was not until 1876  that a new vicar, Reverend GH Lightfoot, had the paintings uncovered and restored, revealing them in all their glory.

The artist who painted them was no Michelangelo… the style is simple and almost cartoon-like and the stories the paintings depict can be read like a graphic novel, but unlike a modern comic-book, there is no division between the frames.

One panel shows the story of the beheading of St John the Baptist. The King, crowned and robed, is seated at the feasting table with Herodias, his wife, beside him. The price she exacts for permitting her daughter to dance for Herod is the head of the Baptist on a platter. The image of the couple and their courtiers is repeated along the length of the table as the story moves forward. 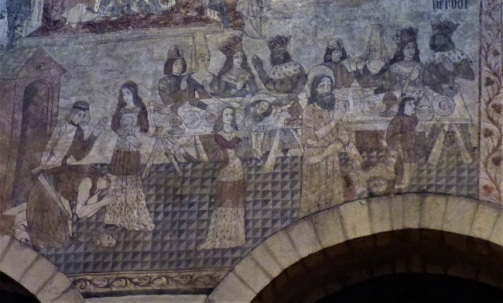 On the left we see the beautiful Salome, hair unbound, clasping a platter to her breast as she waits for the executioner to behead the Baptist. The fact that the headman is dressed in the particoloured clothes more usually seen on a jester is not lost on us… we have seen it so many times before in mediaeval paintings…

A little further along and Salome carries the head on the platter to give to her mother. Further still and Salome dances, bending low to the floor before King Herod.

Another panel tells of the martyrdom of Edmund, king and saint, who ruled East Anglia from around 855 until his death. He was killed by invading Vikings in 869, for refusing to deny his faith. He was tied to a tree, shot with many arrows and finally beheaded. The severed head, so the tale goes, was thrown into the bushes where it was guarded by a ghostly wolf until his followers came searching… crying out to them that they might find it. Edmund was the original patron saint of England. 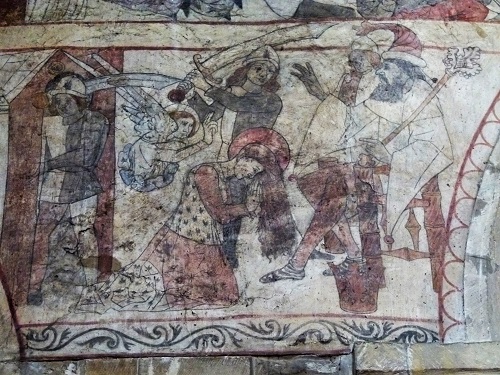 Yet another shows, in graphic detail, the scourging, starvation, breaking on the wheel and final beheading of St Catherine of Alexandria… which, along with the George and Christopher, who were also beheaded, makes for an awful lot of beheaded saints in one church… and the questions that raised had made their way early into our books…

Other scenes show the seven acts of corporal mercy, which counter the seven deadly sins by tending to the bodily needs of others, and the Passion and Resurrection of Christ. A favourite panel is the Harrowing of Hell, which, according to Christian tradition, took place between the Crucifixion and the Resurrection, when Christ descends to the nether regions to liberate the righteous souls trapped there. The mouth of Hell is depicted as a dragon-like beast, guarded by demons, from which emerge the naked souls, both men and women. In a curious act of early censorship, their nakedness is covered by blank circles. 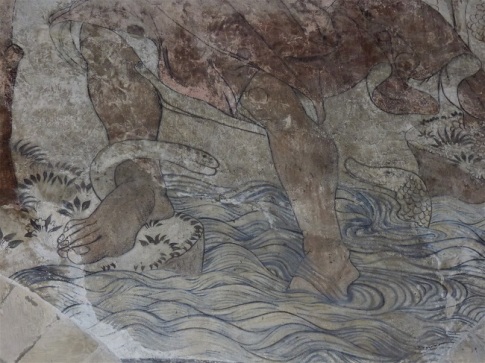 The church has to be seen in person to appreciate the scale and complexity of the paintings, from the repetitive detail of the tiled floors in King Herod’s banqueting hall, to the jewels and costumes of the characters so vividly depicted, to the smile on the face of the eel that wraps itself around the leg of St Christopher as he carries the Child. All are depicted in mediaeval dress… ensuring that their status would be understood by the unlettered worshippers within the congregation, who could learn the stories of the saints and of the Christ simply by raising their eyes.

The wall-paintings are remarkable, a survival against all odds, showing us what so many of our mediaeval churches would once have looked like. It would take a lifetime and more to study them in detail… to find all the tiny clues and decipher the visual symbolism we have forgotten how to read.

But, with the light almost gone, it was time to depart… always a moment of mixed emotions; gladness at time spent with a friend too seldom seen, sadness at the imminent farewell and the end of another weekend playing in the landscape. We found a quiet corner in the churchyard, guarded by the carved dragons that adorn the church and shared a few moments in meditation before walking back to the cars and taking our separate roads. 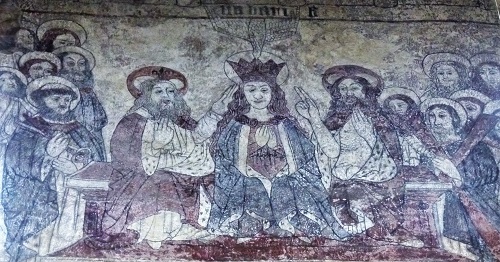 Sue Vincent is a Yorkshire-born writer and one of the Directors of The Silent Eye, a modern Mystery School. She writes alone and with Stuart France, exploring ancient myths, the mysterious landscape of Albion and the inner journey of the soul. Find out more at France and Vincent. She is owned by a small dog who also blogs. Follow her at scvincent.com and on Twitter @SCVincent. Find her books on Goodreads and follow her on Amazon worldwide to find out about new releases and offers. Email: findme@scvincent.com.
View all posts by Sue Vincent →
This entry was posted in albion, Ancient sites, Art, Churches, England, History, Photography and tagged Harrowing of Hell, John the baptist, mediaeval art, Pickering, Salome, St Catherine of Alexandria, St Christopher, St Edmund, wall paintings, yorkshire. Bookmark the permalink.