Horror in the sun… 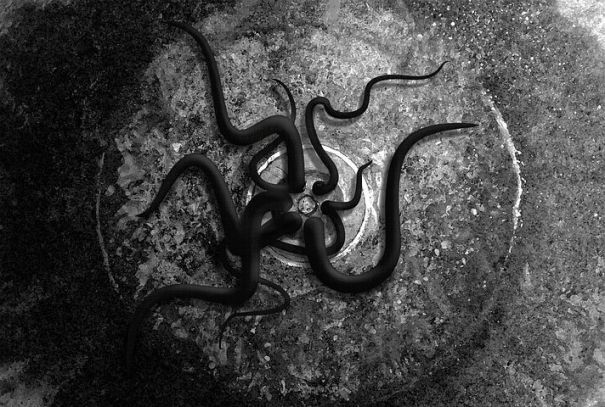 It could have been worse, it could have been raining, but it was a springlike day of clear sunshine. Unseasonably mild, it was just the type of day for pottering in the garden. So I didn’t mind too much when I noticed the pond pump had slowed to a trickle and would need cleaning.

I have long since figured out a way to do the job efficiently, with minimal fuss and effort. I haul the thing out of the depths with a sturdy nylon line that I keep attached to the submersible unit and, if I’m lucky, it takes no more than ten minutes with rubber gloves and the garden hose to clean the pump.

If I’m not lucky, there will be worms. Wet worms. Wriggling around inside the housing. Sometimes hundreds of them.

I am not afraid of worms, don’t get me wrong here. I know they cannot hurt me. There are places… like in the earth… where worms are good and I am perfectly at ease with them. But wet worms are a different matter.

It all began one awful morning when I was small. It had rained heavily all night and all the grassy banks that sloped down to the path I had to take to school were completely covered with thousands of wet worms…pallid, drowned and unavoidable. You could not take a single step without wet worms underfoot.

Over half a century later, I still cannot ‘do’ wet worms. Even at a distance. I cringe, I react with panic in spite of my own mind berating me… and I squeal. Which is why I have worked out how to clean the pond pump efficiently and with minimal contact.

The fact that I can do it at all is only down to necessity and it illustrates just how far we can go beyond our own emotions when a real need arises. The sturgeon rely on well filtered, well-oxygenated water. If the pump does not work, they struggle to breathe, flounder on the surface and would soon die without help. So I clean their pump.

The trouble is, that this time, it didn’t work. I switched the pump back on… nothing happened. Not a drop of water flowed.

For the next hour, I checked all the electrics, crawled beneath bushes to test and change every fuse in the garden set-up. Still nothing. The only thing left to check was the filter… a huge great affair that sits in a big box in the corner of the garden. Cleaning that is a big job… and one for which I have, in the past, had to call the cavalry.

The trouble is, the whole thing is a wet worm’s paradise and it is writhing with the things.

I have been called brave a good few times in my life for things other people see as courageous, but which were, on the whole, just the result of having to get from ‘A’ to’B’ by keeping moving forward. Courage, my Granny taught me, is about being scared and doing things anyway. A phobia is an irrational, unreasonable fear that can induce extreme reactions such as panic attacks and acute anxiety. I think my Granny would have been proud of me for even attempting to tackle that damnable filter.

On the first occasion I’d had to do it, my younger son had been the cavalry and concern for my sanity made him banish me to the far end of the garden. No such luck this time. The cavalry being unavailable, Nick and I had to tackle the thing. We’d worked out how it has to be done… I heft the stone slab off the top of the box, dismantle the wooden lid, gingerly and at arm’s length pull all the filter sponges out and hose them from a distance, while Nick props himself against the box and bales the rest of the stinky gunge into a bucket that I then have to empty. All the while desperately pretending that I see no worms…

We managed the job… eventually. Aching everywhere, soaked from the spray and covered in mud, we reassembled the thing. With the utmost relief, I stripped off the rubber gloves and headed inside to the switches to see if we had cured the problem. And at the end of it all, the damned thing still wouldn’t work. The electrician my son called in later says he needs a new pump.

I surveyed the pond as the fountain offered the fish a little relief. Feeling something tickle my face and, being a tad concerned it might be a spider from the bushes… they inspire no fear but I treat them with caution since the whole bite episode… I lifted my hand to brush my cheek. It came away with a tiny wet worm stuck to it.

All decorum to the winds, I squealed and wiped it off as if disposing of the evidence of murder… but as I looked down, I saw my jumper covered in the things… half of them squashed, the rest still wriggling…

I draw a veil over the next few minutes… an interlude that would have been at home in both a Hammer Horror film and a slapstick comedy as I scrubbed, screeched and cringed.. All I wanted to do was strip there and then and get in the shower… but home and clean clothes were a fair drive away. I would have half an hour of hell to get through before my ablutions… or so I thought.

“I could use something to eat now,” said my son, who had already refused the cooked lunch I had proposed. And what did he now want cooking for his lunch? Stir-fry… I ask you, would you fancy cooking a pan full of noodles after that?

Sue Vincent is a Yorkshire-born writer and one of the Directors of The Silent Eye, a modern Mystery School. She writes alone and with Stuart France, exploring ancient myths, the mysterious landscape of Albion and the inner journey of the soul. Find out more at France and Vincent. She is owned by a small dog who also blogs. Follow her at scvincent.com and on Twitter @SCVincent. Find her books on Goodreads and follow her on Amazon worldwide to find out about new releases and offers. Email: findme@scvincent.com.
View all posts by Sue Vincent →
This entry was posted in fish and tagged fear, humour, phobia, pond, worms. Bookmark the permalink.

65 Responses to Horror in the sun…