“Bloody Hell!” The blasphemous words were out before I could stop them… and in a church too! I think, under the circumstances, I might be forgiven. My companion, though less verbal, was equally astounded. 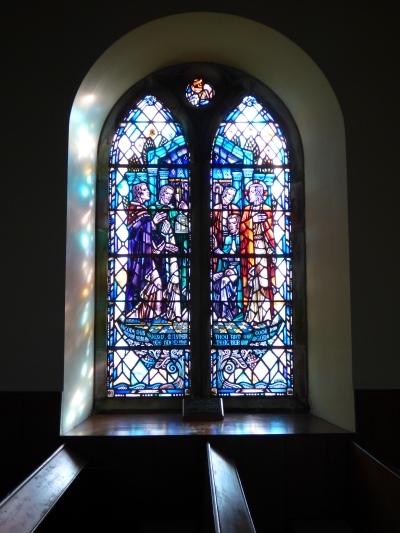 The history of the little kirk at Ruthwell is a hard one to trace… I can find out very little about its origins except that it is the oldest serving church this far south in Scotland and that is has a medieval church at its heart that goes back to 1200AD, if not further. The current interior of the building is simple and clean, painted in pastel colours… and dominated by the Ruthwell Cross. 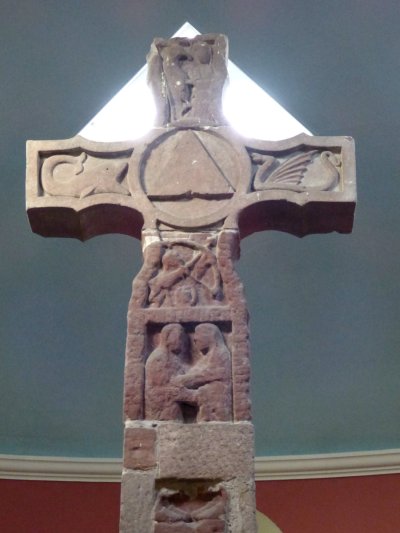 There is no shortage of information about that. Even standing just inside the doorway of the little church we were utterly amazed at the sheer scale of the thing; a great, carved pillar of stone standing behind the altar and serving as a focus for worship. The carvings looked so crisp too… as if it had been sheltered much of its life from the attrition of the elements.Of course, as we got closer we saw the whole story… we had only seen half of it. The apse in which it stands has a crypt … and the base of the cross sits within its well. The massive blocks dwarf the Gosforth Cross… it is, quite simply, incredible. 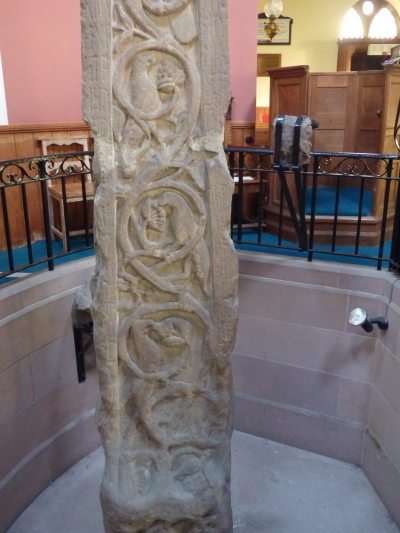 The cross stands eighteen feet high and dates back around one thousand, four hundred  years. Latin inscriptions line the narrow bands at the edges of the cross, birds and strange creatures sit amongst the vine-like scrollwork of the sides while the two main faces are deeply incised with images. Its early history is unknown, though local legend suggests it may have been part of a priory at nearby Priestside. Certainly the cross is so imposing that if it was intended to be placed indoors, the building would have had to be large.

Sue Vincent is a Yorkshire-born writer and one of the Directors of The Silent Eye, a modern Mystery School. She writes alone and with Stuart France, exploring ancient myths, the mysterious landscape of Albion and the inner journey of the soul. Find out more at France and Vincent. She is owned by a small dog who also blogs. Follow her at scvincent.com and on Twitter @SCVincent. Find her books on Goodreads and follow her on Amazon worldwide to find out about new releases and offers. Email: findme@scvincent.com.
View all posts by Sue Vincent →
This entry was posted in adventure, Churches, History, Photography, Poetry, scotland road trip, travel and tagged aetheling, Anglo-Saxon, Cross, Dream of the Rood, runes, Ruthwell cross. Bookmark the permalink.