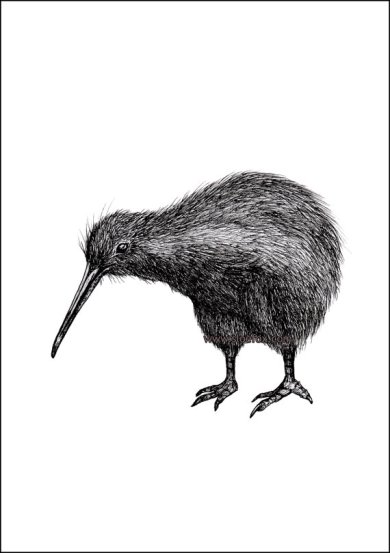 Hokitika Kiwi by my son’s friend at Sloefox Fine Art

The first thought that sprang to mind when I saw work created recently by a young lady who is a friend of my son was that were I to write the children’s book that is wandering round my mind, I think she would make a perfect illustrator. There is a quality to her work with a fineliner that took me straight back to the books of my childhood… even though reading them may not be so far away as you might expect.

I still read children’s books. I make no bones about that, nor any apology. There is a simplicity and clarity in the way the stories are woven, often barely hiding the underlying message; sometimes disguising it so well that it is only as an adult that you realise what you had been reading all those years ago. In fact, I would agree with C.S.Lewis, the creator of Narnia, that, once beyond picture books, ‘a children’s story that can only be enjoyed by children is not a good children’s story in the slightest.’ 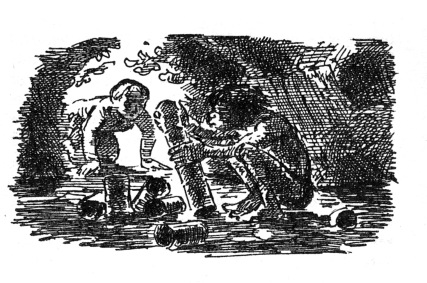 Stig of the Dump by Clive King. illustration by Edward Ardizzone © Puffin Books

I’ll be honest, most of the children’s books I read are the old favourites. Worlds that were woven in my childhood still wait for me through the wardrobe or between the Beltane fires. Their familiar landscapes are home to my imagination, the characters I have loved so long are friends, teachers and the companions of my child-self.

Most of the books I read as a child had an element of magic to them. I was never one for the Famous Five type of thing, with lemonade and sandwiches to finish. No, for me it began early with the Magic Faraway Tree and the adventures of the Wishing Chair… which inevitably led on to Wonderland and the Looking Glass, via the Land of Green Ginger and meeting Stig of the Dump. And Narnia. Always Narnia. But then, that wasn’t just a place in a book… it was Real. 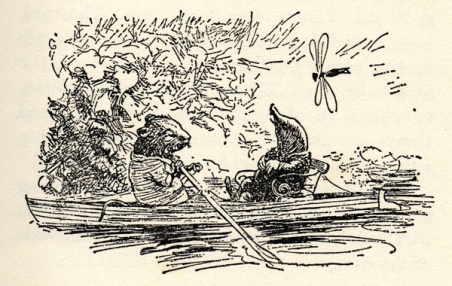 The Wind in the Willows by Kenneth Grahame: Illustrations by EH Shepard

What do I mean ‘was’… it is real for me, and always will be, as long as my name is both Susan and Lucy… my mother’s nickname for me…and for just as long I will seek to bury my face in the Lion’s mane with love… even though ’he’s not a tame lion.’

Many of my childhood books are still in my keeping. It is probably no surprise that they snuggle cover to cover with fantasy on my shelves; the evolution was a natural one and works of fantasy bear much in common with children’s stories. The best ones still share a deeper meaning with the reader and teach through imagination… something we have adopted for the Silent Eye too, oddly enough. 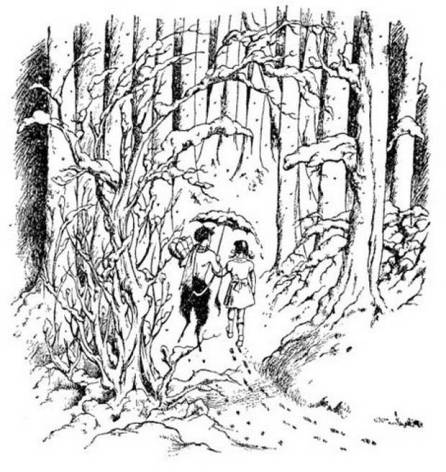 The Lion, The Witch and the Wardrobe by C.S.Lewis; Illustration Pauline Baynes

Dog-eared, well thumbed, some of those childhood favourites are decorated with my first, childish scrawl and early illustrations… even if I now have no idea what they were supposed to be. The majority of those books were properly illustrated too, in addition to my own infantile efforts. There will never be another image of Aslan for me than the one on Pauline Baynes’ cover for The Lion, The Witch and The Wardrobe. But the covers were only half the story, so to speak.

Inside these books were line drawings, pen and ink illustrations of the characters and action… and many I recall even today though the story itself may have faded. From the slightly sinister illustrations from Down the Snow Stairs, to the simple style of Dorothy M. Wheeler, via the magic of the illustrators whose names I did not know back then has stayed with me for a lifetime, shaping both memory and the landscape of my own imagination. They are, more often than not, the unsung heroes of the children’s book. 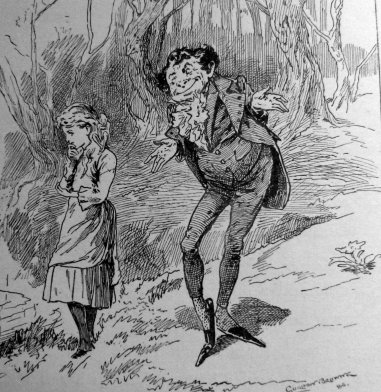 Down the Snow Stairs, Alice Corkran. Illustration by Gordon Browne

Yet even as an adult, the illustrations… rare in books intended for such lofty beings as grown-ups… still matter. Perhaps that is why almost all our books have images.. and why we ventured into the graphic novel with Mister Fox. Whether it be marvelling at Blake or Gustave Dore’s illustrations… or whether I am simply revisiting the bookshelves and finding once more the images created by such as E.H. Sheppard, Ronald Searle and Edward Ardizzone, there is something very special about those simple images that makes the magic happen and turns back the clock until the heart is as light as that clear, clean heart of a child once more. 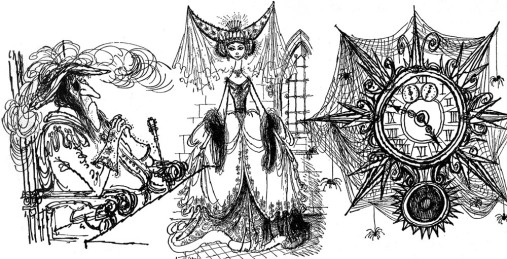 The Thirteen Clocks and the Wonderful O by James Thurber. Illustrations by Ronald Searle

Sue Vincent is a Yorkshire-born writer and one of the Directors of The Silent Eye, a modern Mystery School. She writes alone and with Stuart France, exploring ancient myths, the mysterious landscape of Albion and the inner journey of the soul. Find out more at France and Vincent. She is owned by a small dog who also blogs. Follow her at scvincent.com and on Twitter @SCVincent. Find her books on Goodreads and follow her on Amazon worldwide to find out about new releases and offers. Email: findme@scvincent.com.
View all posts by Sue Vincent →
This entry was posted in Art, Books and tagged childhood, children's books, illustrations, Narnia, Searle, Sloefox, Stig, Thurber. Bookmark the permalink.

35 Responses to Images and imagination