When I found the letter with the Australian postmark on the doormat, I wondered who on earth it could be from. A handwritten envelope that felt as if it held something more than a letter. Staving off curiosity until I had let out the dog, fed the fish and made coffee, I sat down at last to open it… and was thrilled to find a small book inside… with one of my paintings on the cover.

It all made sense then. A while ago I had a comment, from poet Antony Fawcus, asking permission to use one of my paintings to illustrate a suite of poems he was writing for FanStory. I was more than happy to agree. A little later, Tony informed me that the poems were to be published in chapbook format, and he kindly offered to send me a copy by post.

What I didn’t expect was that my painting would be on the cover.

The painting is a very old one, and oddly enough, Ani was not yet in the world when I painted it. I called it ‘Midnight Echo’, which is probably how Tony found it, as his sequence of poems is called Midnight Echoes and I am honoured to be associated with his work in this small way.

On a lighter and more personal note, having had my work published in print on three continents, do I legitimately get to call myself an international writer and artist now? 🙂

An extract from Midnight Echoes by Antony Fawcus

A sequence of fifteen linked poems, published by Ginniderra Press as part of their ‘Pocket Poets’ series and availble via their website. 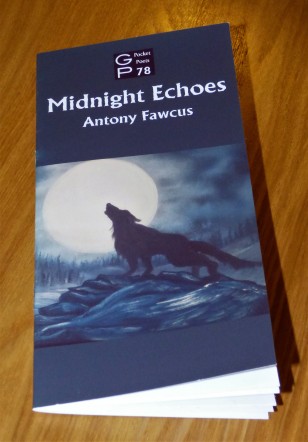 and lose its focus on the vital aim,

which is amassing toys with which to play;

this life has rules, and we must know the game.

There is no time to linger and delay,

for if we’re left behind, there’s only shame.

and night as well. For slaves, they’re just the same.

At length the world will raise a marble slab

declaring Everyman has given all

in vain pursuits, for which his life was sold;

his days were dun and draped with shades of drab.

His latest book, Brindled Words, has been accepted for publication and should be available late 2018 or early 2019.

Antony’s work can be found on his website and at Fan Story.

Sue Vincent is a Yorkshire-born writer and one of the Directors of The Silent Eye, a modern Mystery School. She writes alone and with Stuart France, exploring ancient myths, the mysterious landscape of Albion and the inner journey of the soul. Find out more at France and Vincent. She is owned by a small dog who also blogs. Follow her at scvincent.com and on Twitter @SCVincent. Find her books on Goodreads and follow her on Amazon worldwide to find out about new releases and offers. Email: findme@scvincent.com.
View all posts by Sue Vincent →
This entry was posted in Art, Books, Dogs and tagged artwork, cover design, letter, mail, Poetry. Bookmark the permalink.

46 Responses to The mysterious letter…