A flying visit – The Guild Chapel, Stratford upon Avon 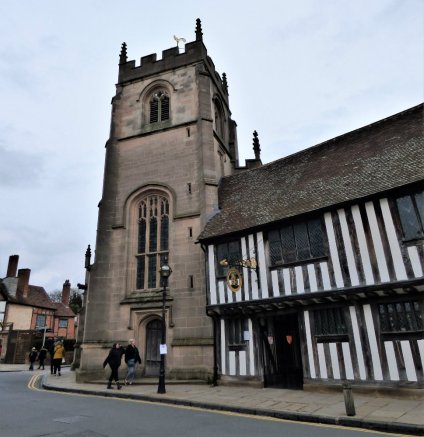 I mentioned that, during our visit to Stratford upon Avon, we had wandered off on our way back to the car, drawn by the tower of a small church. It had proved a profitable detour, bringing us to an old part of the town and  to the site of Shakespeare’s final home, New Place. The house is now gone, but there is a  garden, overlooked by old red-brick and timber buildings. The church tower is right next door and adjoins the Guild Hall and almshouses that also contain the schoolroom where William Shakespeare was educated. It is, therefore, a pretty safe bet that he also attended the Guild Chapel.

We wouldn’t have minded had he never set foot in the place, though, not with the grotesques over the porch. A more intriguing pair would be hard to find…and I still haven’t found any explanation for the ‘ring’ on the tongue of the first, or why the other is riding and wrestling a bull, with one hand holding its mouth and the other grasping its nostril. That last, at least, is explicable. You grab a bull by the nose to control it… or so the folk wisdom says. I wouldn’t care to try it myself. Symbolically, it reminds me of the Tarot card, Strength, where a woman controls a lion. I wonder if there is not a similar story here, where man must conquer the Beast in his nature? It is just as likely to be a whimsical and topical statement by the sculptor, that tells a forgotten story.

We were lucky, given how late it was in the day… the doors were still open and, as soon as we walked through them, so were my eyes. At first glance…and provided you do not look up… it looks like a very poorly remodelled church…not at all like something that would have been around in Shakespeare’s day. But when you do look up, everything begins to fall into place.

The Guild Chapel was founded in 1269, when permission was granted to the Guild of the Holy Cross to build a chapel and hospital in Stratford. Traces of this original building still remain within the fabric of the church, but the first glimpse shows mainly the 15th century interior built by High Clopton, who also built Shakespeare’s home at New Place. Clopton, along with John Shakespeare, the Bard’s father, is commemorated in one of the stained glass panels behind the altar. 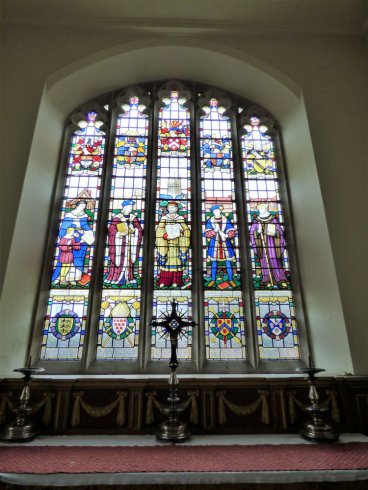 Clopton added the nave and tower, but his most astonishing legacy is the collection of wall paintings dating back to the 1490s. At that time, the walls of most churches were painted with vivid scenes from the bible, Christian myth or simply with moral injunctions. That they have survived for so long can be obliquely credited to John Shakespeare, who was ordered to destroy the paintings following the English Reformation, which condemned such ‘Popish’ iconography. In 1559, Elizabeth I passed a Royal Injunction which commanded the “removal of all signs of superstition and idolatry from places of worship”. John , instead of smashing and defacing the paintings, had them whitewashed, thus preserving them… a fact that adds fuel to the debate to whether the Shakespeares were Catholic at heart.

The Bard would have been only a boy at the time. I wonder how the child felt, seeing the images he must have been taught to see as sacred being thus defaced? For a child at that time, the pictures, even without their religious connotations, must have seemed magical. Saint George slaying the dragon must have been a favourite for a small boy, surely.

There are faded traces of figures all around the walls, with saints in niches, and strange carved faces in the tracery of the windows. The most impressive painting is the Doom over the chancel arch, the colours and silhouettes still vivid today.

Many of the figures have strange, exotic headdresses…many are being hauled away by demons, while a few are gathered to Heaven by a headless Christ.

This was not always the case, but a lowering of the ceiling left His head and His attendant angels in the loft of the chapel where they are now very well preserved. Some of the carved angels that once decorated the chapel have also survived. 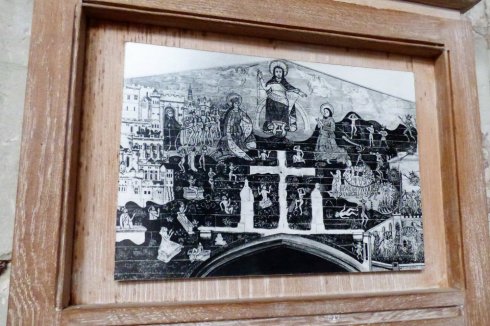 Artists reconstruction of the Doom

At the west end of the chapel, the gilded pipes of the organ are flanked by yet more paintings. Some are faded beyond recognition by the naked eye and are only discernible through the reconstructions based upon the findings of the conservationists.

One painting, though, has survived remarkably intact. It shows a winged figure, probably the Archangel Michael given his garment of leaf and flame. His face has been scratched out, literally de-facing him, yet the poem ‘Erthe upon Erthe’ is still clear… as are the worms crawling across the shroud of the deceased.

The ‘Earth upon earth’ refers to  Mankind. The poem is a variant of one seen in several places across the country and in old manuscripts. It is also called the Allegory of Death and the earliest recorded examples date back to the beginning of the 1300s. It speaks of the inevitability of death, the ultimate pointlessness of the quest for worldly goods and power and reminds us of our common fate.

There are other wall paintings too… many of them… but these are yet to be uncovered. Hidden and preserved behind the panelling is a Life of Adam and a Dance of Death. Conserving these paintings is of the highest priority and they will not be revealed until the funding is in place to protect them.Meanwhile, there is still much to see, from the splendid Tudor notables in the windows, to the easily-missed carvings in the traceries…and even the modern embroidered frieze telling the legend of St Helena’s discovery of the True Cross. 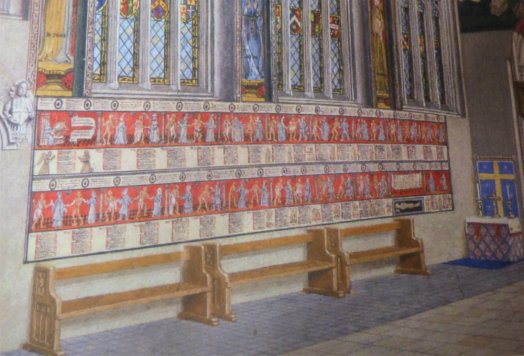 Artists impression of the hidden paintings

We may not have made it to Shakespeare’s burial place…but after all, his plays are all about life, so perhaps it was fitting that it was the places where he lived, grew and learned that were the ones we saw. Imagination may have had to fill in the gaps, but we were privileged to glimpse the Bard’s home town , at least in part, as he would have seen it. We had no idea what we would find when we answered the call of that church tower. But when you are nudged and pay attention, there is always something to find. 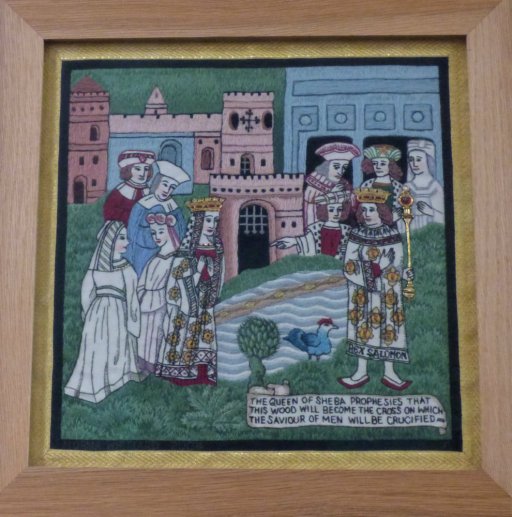 Sue Vincent is a Yorkshire-born writer and one of the Directors of The Silent Eye, a modern Mystery School. She writes alone and with Stuart France, exploring ancient myths, the mysterious landscape of Albion and the inner journey of the soul. Find out more at France and Vincent. She is owned by a small dog who also blogs. Follow her at scvincent.com and on Twitter @SCVincent. Find her books on Goodreads and follow her on Amazon worldwide to find out about new releases and offers. Email: findme@scvincent.com.
View all posts by Sue Vincent →
This entry was posted in Churches, England, historic sites, History, medieval wall paintings, Photography, Stuart France and Sue Vincent, symbolism and tagged art, grotesques, Guildhall, New Place, schoolroom, shakespeare. Bookmark the permalink.

22 Responses to A flying visit – The Guild Chapel, Stratford upon Avon