Notes from a small dog – The IQ test… 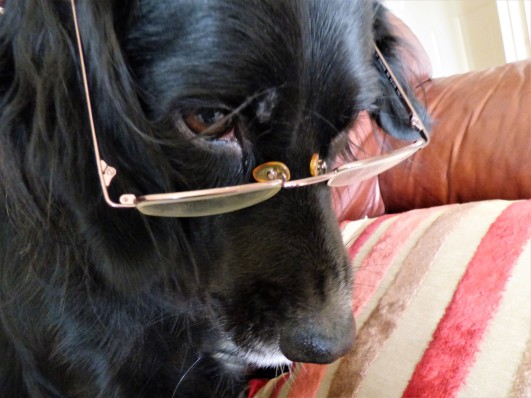 She came across an IQ test for dogs. Stuff like finding treats and problem solving.

Why was she even looking? Have I ever failed to find a treat? And she can get really creative about where she hides them.

So, we didn’t do it. The test gave the dog half a minute to solve the problems to get the highest score… Boring! I can find a treat and get it out from where she’s hidden it in seconds! 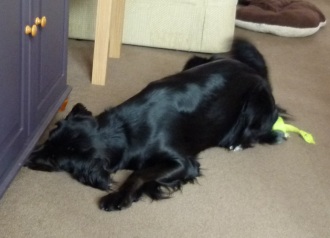 There were extra points if it was paws only, not muzzle. She bought me a toy a while ago, a puzzle where she hides treats in compartments and I have to choose the right compartments and slide open the lids with my paws to get the treats. It says ‘fifteen minutes of fun for your dog’ on the box.

I did it in fifteen the very first time. Seconds, though, not minutes.

Another where you have to get a treat out from under a low place. No problems there!

According to the test thing, that makes me a genius.

Now, a real genius, I would have thought, would have their two-legses properly trained. It saves a lot of hassle. Treats would arrive pretty much on demand… like every time they go in the kitchen. Dinner would be shared. The fridge kept properly stocked with chicken and cheese. The two-legs would know how to fetch and throw the ball and do so pretty constantly… and be ready to play out as soon as it snows. Normally, I just make her get the ball when it goes under the furniture. She likes playing hide and seek and it is good for her. Keeps her moving.

So actually, I score pretty highly there too 😉

But then there are places, she says, that tell you not to get an intelligent breed if you want a quiet life and if things like obedience matter.  Where’s the fun in that? She looked at me funny when she said it too.

Four-legses have been training you two-legses for centuries…and you didn’t even notice until the cats got in on the act.

Two-legses chase things till it hurts… always wanting ‘better’ things. I just chase things for fun. I get room service, a warm place to sleep, lots of walks and fresh air and loads of cuddles. And I don’t have to be anything except me. All she asks of me is to be there and share her days. So I’m there when she laughs, there when she cries (and under the desk when she runs a bath. Just in case.)

So if we are talking intelligence here, maybe we should have a bit of a think about that…

Sue Vincent is a Yorkshire-born writer and one of the Directors of The Silent Eye, a modern Mystery School. She writes alone and with Stuart France, exploring ancient myths, the mysterious landscape of Albion and the inner journey of the soul. Find out more at France and Vincent. She is owned by a small dog who also blogs. Follow her at scvincent.com and on Twitter @SCVincent. Find her books on Goodreads and follow her on Amazon worldwide to find out about new releases and offers. Email: findme@scvincent.com.
View all posts by Sue Vincent →
This entry was posted in Dogs, Humour and tagged canine mind, definition of intelligence, intelligence testing, Life. Bookmark the permalink.

75 Responses to Notes from a small dog – The IQ test…