Guest author: Jane Risdon – The long and eventful birth of Only One Woman.

Deciding to co-write with another author who lives some distance away would have been enough to put a lot of writers off collaborating, even if the benefits of the internet make it so much easier today. But deciding to write with another author who is well-known, award-winning, and writes in a different genre to one’s own, well, that is quite another matter. Yet that is what Christina Jones and I have done – we’ve written a book which is certainly not my usual genre of crime/thriller and in fact, it is not completely in her usual genre – Bucolic Frolics – either.

Only One Woman is a work of fiction but both Christina and I have a mutual – shared – history, and with our combined experiences and knowledge of the music scene, love of fashion and all things sixties, we always said that one day we’d write a book together about those amazing times. But you know how it is; the years pass as we get on with our lives. The book idea is put on the back burner.

How did we manage to co-author a book of 772 pages whilst meeting up only once to discuss it? Let’s start at the beginning and hopefully you’ll see what an epic journey we have both been on.

First some background to our relationship. In 1968 I met my now husband who came to stay in the village where I lived. He came with his band – he was (and still is) a musician – and they had travelled from overseas to tour and record. Their manager found them rented accommodation not far from where I lived and that is how we met.

During their time in England their manager decided they needed to employ and England-based Fan-cub secretary and so enter Christina who, at the time, was a rock journalist and short story writer for teen magazines. She met the band at a gig in the village where she lived, unknown to me, about two hours bus ride from where I lived. In fact Christina and I never met for years – more on that later.

In her role as fan-club secretary I got to know her via letters and the band newsletters she sent out – as my then boyfriend’s number one fan, I joined his band’s fan-club.

The band toured England and Europe and went off to exotic places on various cruise ships whilst awaiting release of their first single. Meantime I moved overseas for several years, popping back to England as often as I could afford, to spend time with my boyfriend whenever he was back from his own adventures.

Years came and went, I married my musician and we had a son. Christine married and began her successful career as a best-selling author. Eventually my husband’s band broke up – as bands often do. We – husband and I – went into business together as managers of recording artists, song-writers and record producers, living a nomadic lifestyle on the road, in studios making records, and working on soundtracks for TV/Movies mainly in Hollywood. Meantime I harboured dreams of becoming a crime writer. Working 24/7 in several countries and time-zones – sometimes in the same week – is not conducive to writing, so my dream was put firmly on the back-burner until we decided to slow down and cut back our business activities.

During all those frantic first years I had still never met Christina, even though we’d kept in touch. Until one day, not long after moving to a new area and home, our young son arrived home from school excited that his teacher said she knew his Dad. Of course we wracked our brains and then the penny dropped; Christina’s Mum was a teacher and we lived not far from her family home. Her parents often entertained my husband’s band when they were touring and in their vicinity. We didn’t think anything of it until we were out shopping one day and bumped into Christina in a store. All those years of ‘knowing’ each other and finally we got to meet in person.

Fast forward several years when we both discussed writing together but her career and our crazy lives still got in the way. We moved home and county again and anyway we lived overseas mainly, so we promised ourselves ‘one day’ we’d do it.

Christina had recently published another novel and I – with my bossy hat on – arranged for her to give two talks to local libraries in another new county we’d settled in now back in the UK. We met up on both occasions to discuss – very vaguely – what we’d do about writing, but life gets in the way and nothing happened. However, I decided to stop putting it off and began writing. She read everything I wrote, mostly crime stories – sent my email – and encouraged me. She continued to publish book after book.

During our last move I found myself looking through boxes of tour memorabilia, tour schedules and diaries from my husband’s days with his band and our life in the international music business, and it got me thinking about writing with Christina. Here was something we could both write about from experience and knowledge – a book set in the late 1960s. But at first I couldn’t think how to tell the story of those fabulous days but even so I started making notes – under diary headings – and before I knew it I was inventing characters, embroidering their lives into the events of the time.

Christina and I met up to discuss ideas and used a visit to see Peter Robinson, crime writer, at a book signing as a catalyst. A bonus for Christina is that his wife is a big Christina fan and he mentions her books in his books! I introduced them both as she was too shy to tell him who she was. He was chuffed and said his wife would be really annoyed not to have met her too. We managed to find a pub and have a good natter about writing our book and how we could manage it long-distance.

I carried on writing and when I had gone as a far as I could with my main character, Christina began fitting her main character into the story so that we had diary entries for both girls – Renza and Stella – which told their story through their love of music, fashion, and how world events entered their lives as they both – unknown to each other – shared the love of one boy – the gorgeous Scott, lead guitarist with Narnia’s Children.

We follow the girls through the middle of 1968 the end of 1969 as Scott struggles to make up his mind; after-all, there can be Only One Woman. Of course what happens after 1969 is something I cannot reveal at this point…possibly another book if this one does well.

We wrote together via email and text during a period of illness for Christina and various deadlines for her books. I fell down the stairs and broke my shoulder and collar bone awkwardly so ended up using one arm, and typing one-handed. Christina – unknown to me until later – was by now published by the same publisher as me, and we submitted Only One Woman – partly written – to them, and they loved it. We’ve had several publication dates set and passed due to various hold-ups too numerous to mention, but here we are.

We hope people enjoy the book as much as we have enjoyed writing it. It’s been a bit like a very long pregnancy followed by a long labour, but for us, the birth has been worth all the pain. 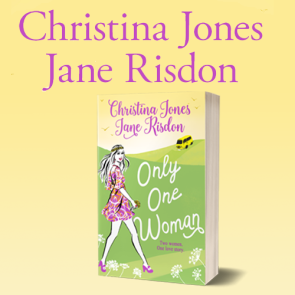 June 1968. Renza falls head over heels for heartthrob guitarist Scott. But after a romantic summer together they are torn apart when Renza’s family moves away.

December 1968. On the night she believes to be her last, Stella meets Scott at a local dance. He’s the most beautiful boy she’s ever seen and if this one night is all they have, she’ll take it.

As the final colourful year of the sixties dawns, the question is: can there be only one woman for Scott?

Find out more about Only One Woman at Jane’s blog.

Only One Woman has its own Facebook Page where followers can read snippets from the book, enjoy music and fashion posts and generally all things 1960s. Great nostalgia for those of us who lived through those times; a great place of discovery for those who have not. 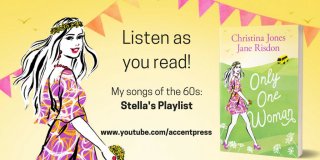 Renza and Stella have their own YouTube playlists each, with their favourite songs from the book. 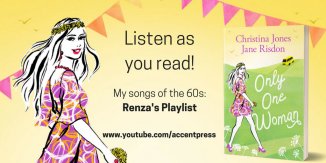 Jane Risdon worked with management of musicians, singer-songwriters, and record producers, rubbing shoulders with the great and glamourous all over the world. She and Christina have been friends since the Swingin’ Sixties.

Christina Jones has written for teenage and women’s magazines, had her own humour column in The Oxford Times and published her funny, feel-good Bucolic Frolic novels to great acclaim. She lives in Oxfordshire.

Look out for  the Only One Woman Blog Tour in November!

Sue Vincent is a Yorkshire-born writer and one of the Directors of The Silent Eye, a modern Mystery School. She writes alone and with Stuart France, exploring ancient myths, the mysterious landscape of Albion and the inner journey of the soul. Find out more at France and Vincent. She is owned by a small dog who also blogs. Follow her at scvincent.com and on Twitter @SCVincent. Find her books on Goodreads and follow her on Amazon worldwide to find out about new releases and offers. Email: findme@scvincent.com.
View all posts by Sue Vincent →
This entry was posted in Books and tagged blog tour, music, new book, new release, playlist, romance, swinging sixties. Bookmark the permalink.

38 Responses to Guest author: Jane Risdon – The long and eventful birth of Only One Woman.