The Wyrm and the Wyrd – Within the living land

It had been a long time since I had first come across a reference to Thor’s Cave when I was doing some research for Dark Sage. We were not, at that point, feeling the call to go there; caves were not really on the menu. Although we had found our way into one or two, they had been incidental to the quest. Now it was a different matter and, for the third time in two days, we were heading underground.

It was a beautiful day…a little hazy but clear and warm. Water-boatmen sculled lazily across the surface of an old stone trough. As usual, we were accompanied by the birds as we followed the path that led towards the side of the hill. It’s head seems to rest on the land like some sleeping creature, eyes closed, but watchful.

There were, it seemed, eyes everywhere in the deserted landscape. The feeling of being watched was unmistakable, even though it was illogical. It sounds a bit fanciful, but it felt as if something was holding its breath, waiting to see what we would make of the cave. 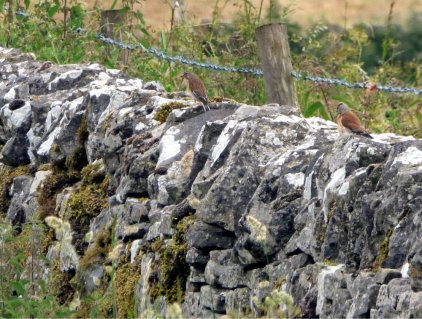 There were watchers, too, as we neared the entrance. Jackdaws perched in the trees and flew in and out of the cavern, their cries an eerie echo, suggestive of an older time when the world was young. It felt as if, with each step, we were walking backwards through history and leaving our world behind.

That was not so far from the truth. The history of the cave goes back as far as Man’s presence in these hills…and beyond that, as we were to see, the memory of the beginnings of the land itself is held in the stone. 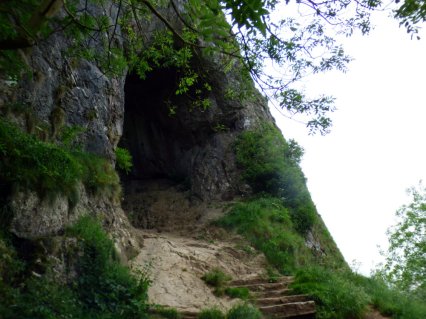 The entrance to the cavern is even bigger than it looks from the valley floor, some 260 feet below and is some 24 feet wide by 30 feet high. At fist sight, it looks like a simple stroll into an easy cave… but in fact there is a steep and slippery scramble over the rocky slope of the floor that makes entry far more difficult than it looks, especially with only a narrow path between the cave and the drop below.

It would be worth the scramble, just for the view alone as you stand within the cavern looking out over the treetops to the hills of the Manifold Valley.

But what you see when you turn back into the cave just takes your breath away. I am not sure which reality looks more real, the growing green of the landscape of the vivid hues of living rock. 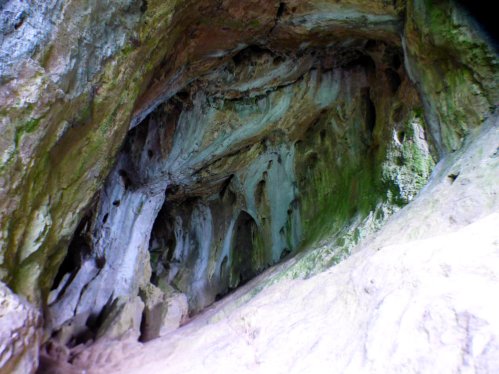 The jackdaws continued to fly in and out, appearing unexpectedly and noisily from the holes in the rock where they have built their nests. The holes look organic, like veins in flesh and you can really feel the life in the stone. It is not difficult to understand why this place was so special to our ancestors. Not only is access difficult, making it perhaps no more than a place of safety at first, it is spectacular, inside and out.

The floor continues at a steep angle… there is no easy route here. The floor only levels when you get a good way inside and then the way is not smooth. There are two entrances… the main arch and the West Window, a second fissure that leads to a steep drop. Below it, almost impossible to access and certainly not  as ill-equipped and unprepared as we were, is Thor’s Fissure, a second cavern that runs deep inside the hill.

Beneath our feet, the rock told its story; fossilised creatures, millions of years old and frozen forever in stone, showed in the smooth surface where the oozing mud left it exposed. In places veins of red mark the stone like smears of blood, adding an even greater impression of life to the cave.

When we stand in the open air and see the green and growing land, we are aware of the richness of life on earth. To stand within this cave is to feel the life of the earth. 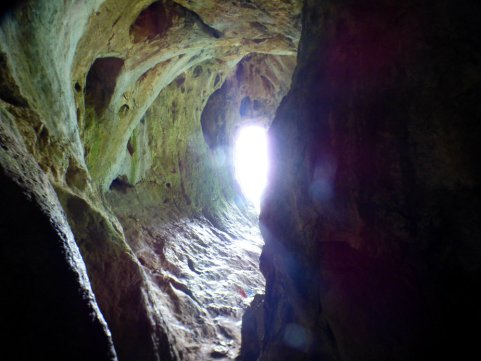 Our ancestors must have felt it too. They were here ten thousand years ago and left the bones of animals that are now extinct. And when they came, they never left. Amber beads, worked flints, a polished stone axe, sherds of pottery, an earring and armlet… fragmentary glimpses of life from those earliest days, right through the Stone Age, Iron Age, Bronze Age and up to Roman and medieval times. 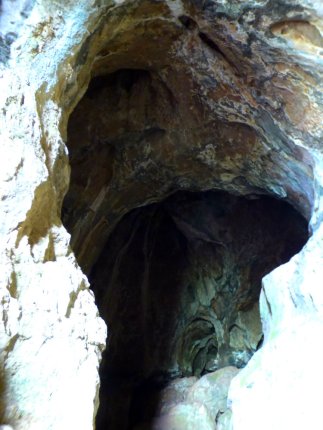 It was not only artefacts that they left though. Seven burials have been found here during the cursory excavations that were undertaken a century and more ago. At least two of them were children. The care with which they were laid to rest here means that this was regarded as a sacred place…and it is easy to see why. 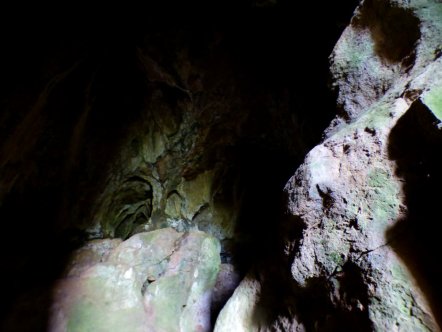 From every wall, faces and forms emerge from the shadows. Deeper and deeper the cavern goes, branching off in two directions. Darker and darker until the light is swallowed by shadow and the only light is that which you carry there with you.

Minerals and lichens create strange shapes on the walls, seen only in the meagre light cast by a cell phone. One looked like a dragon’s head, reminding me that the cave had been used as the location for the Lair of the White Worm. We wished for a torch… not an electric one, but a flaming brand like those our ancestors would have carried. 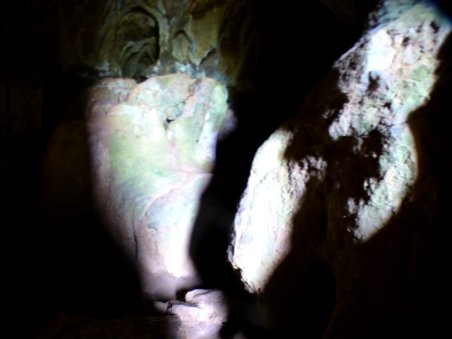 It was eerie enough to walk into darkness with glimpses of grotesque faces, strange beasts and looming presences… it would be amazing to see them in the flickering light of flames.

‘Eerie’ is the right word. You cannot see where you will place your feet. Trickles of water echo in the deeper caves, flutterings in the shadows may be jackdaws or bats…and anything might lie ahead unseen in the blackness into which you walk. And you can feel the eyes… 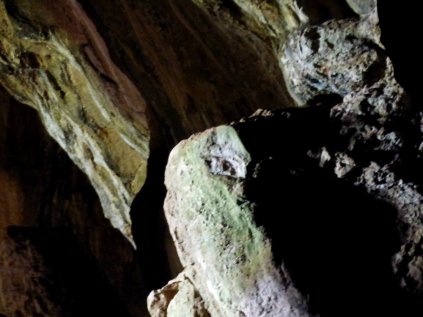 The only reassurance is the lack of barriers and warnings… the fact that the cave is open to the winds and the walkers who find their way here implies that there will be no deep shaft opening suddenly beneath your feet. Yet there is still that frisson of fear…

But that is a known and logical fear. Even in a place of utter darkness, where every flicker of light reveals watching eyes and fantastical creatures… there is no sense of threat or foreboding. Just presence.

We did not want to leave. In this place of the ‘wyrm’, we turned to the ‘wyrd’, sitting by the West Window to take the final bibliomantic  reading of our adventure. “…The chosen quotation is the light reading. The non-chosen is the dark. Both are valid but for completely different reasons. The light reading is what can be seen in a given situation, the dark is what has to be intuited.”

Opening the book at a random page, we found a maxim from Thomas Aquinas for the light reading: “Love is cause of all the lover does… Love is the cause of both pleasure and sorrow.” As we reached the end of our days walking the land we love, we could relate to that. “While pleasure is always entire and perfect,” said the dark reading, “sadness is always partial.” That too rang true. As we emerged once more into the outer world, knowing that the weekend was long over, and only hours now separated us from our respective jobs and the daily grind, we carried with us memories of wonderful places and experiences… and the knowledge that although you can never go back to the past, we could always come back in the future….and who knows what adventures may be waiting?

Sue Vincent is a Yorkshire-born writer and one of the Directors of The Silent Eye, a modern Mystery School. She writes alone and with Stuart France, exploring ancient myths, the mysterious landscape of Albion and the inner journey of the soul. Find out more at France and Vincent. She is owned by a small dog who also blogs. Follow her at scvincent.com and on Twitter @SCVincent. Find her books on Goodreads and follow her on Amazon worldwide to find out about new releases and offers. Email: findme@scvincent.com.
View all posts by Sue Vincent →
This entry was posted in adventure, albion, Ancient sites, History, Landscape, Mythology, Photography and tagged burial, Don and Wen, Lair of the White Worm, legend, legends, prehistoric site, Stuart France and Sue Vincent, Thor's Cave. Bookmark the permalink.