The Wyrm and the Wyrd: ‘I am not a number’ 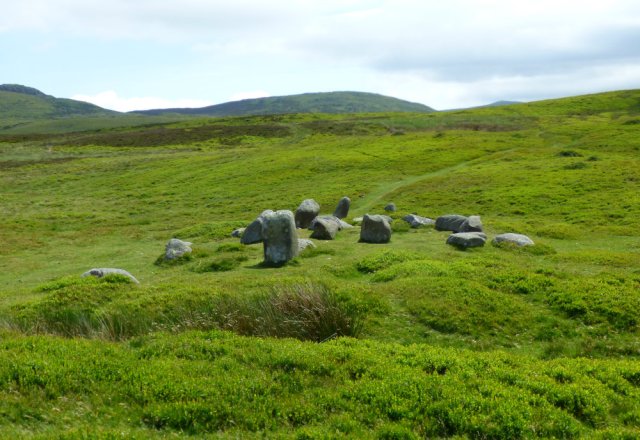 There were people… two of them… heading towards the Druids Circle… so we wandered over to have a look at the intriguing cluster of stones we could see just over the rise in the land. The trouble with these complex sites is that you would need a whole day on the hills just to see them all, let alone begin to ‘join the dots’, see their relationship to each other in the wider context and begin to make any sense of the landscape. Even in this small area of hilltop, there are several stone circles, cairns, barrows, an ancient stone axe factory and a stone alignment. And then there is this… classified only as ‘Monument 280’ or a ‘stone setting’. No-one seems to know what it is.

So close to the Druids Circle, on a hilltop where the only collections of stones are part of recognised ritual structures, it must have been something and important too. It lies in the area between the main circle and Circle 278, where further cremation burials were found, hidden from sight in a hollow just a few yards over the next rise… but there were limits on our time and that will have to wait for another visit. The four upright stones that run north and south of Monument 280 are about forty feet apart and the tallest stones stand waist high on a man. There is a central area which, when undisturbed, might have formed a circle enclosing an area around fifteen feet across and what looks like a kerb arrangement down one side.  As far as I can find out, it has not yet been excavated.

Who names these things? Numbers do not do them justice, even though there was an obvious correspondence with the ‘Prisoner‘ theme that would be running through the Silent Eye event to which we were heading by this circuitous route. And if this is 280, just how many more are in the area? Was it once a covered mound? Has it always stood open to the skies? What aspect of the cycles of the earth or heavens did it mark or align with? There are notches on the peak of Tal-y Ban, not far away and the Holy Isle of Anglesey, Ynys Môn, down below in the bay. I couldn’t help thinking we needed our friend, Running Elk, who had provided such insight at the Raven’s Nest… and with whom we will be exploring the sacred sites of the Don Valley in September. Mind, time was running out, and we would never have left… We still had work to do too taking pictures for the work-in-progress… but, on past experience, only after reassuring the two walkers who were still sitting in the main circle. 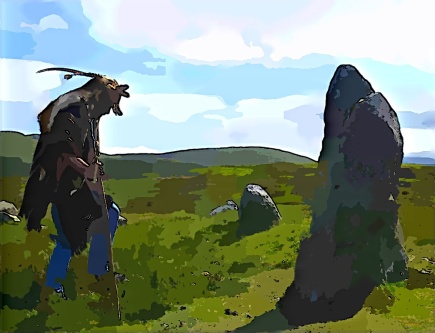 Once our work was done, we reluctantly took a last look at the circle and began the long walk back across the hills to where we had left the car, what now seemed like aeons ago. There was a last place to stop, though, just below the circle. We followed the little pipit that hopped across the heather, leading us down and over the stream once more to the romantically named Circle 275. We had taken a reading in the Druids Circle, but saved the shadow reading until we were within the five stones of 275. As Stuart reported, it was more than a little strange to get something quite so appropriate from a reading chosen at random. 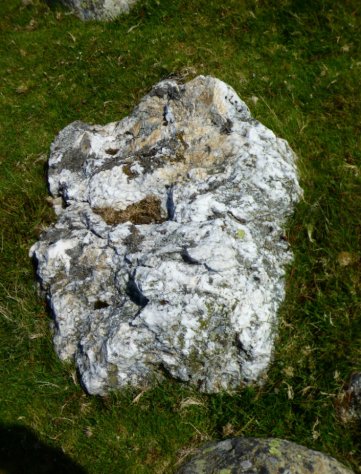 We had left crystals; given the huge chunks of quartz that were in evidence at the sites, especially in the row of stones as we headed back, we felt it appropriate.As if we had approval somehow.This time, we followed the right path, avoiding the dodgy wall-climbing and we had not gone far when the farmer we had spoken to earlier pulled up alongside us on his quad bike. He was finishing rounding up the sheep for shearing and looking forward to his tea which, he assured us, would be ready when he got in. And then his nightly tot of whisky. He looked to be in his early sixties.

Sue Vincent is a Yorkshire-born writer and one of the Directors of The Silent Eye, a modern Mystery School. She writes alone and with Stuart France, exploring ancient myths, the mysterious landscape of Albion and the inner journey of the soul. Find out more at France and Vincent. She is owned by a small dog who also blogs. Follow her at scvincent.com and on Twitter @SCVincent. Find her books on Goodreads and follow her on Amazon worldwide to find out about new releases and offers. Email: findme@scvincent.com.
View all posts by Sue Vincent →
This entry was posted in albion, Ancient sites, Books and tagged Books, mountains, mystery, Penmaenmawr, Photography, Silent Eye weekend workshop, stone circle, Stuart France and Sue Vincent, Wales. Bookmark the permalink.

10 Responses to The Wyrm and the Wyrd: ‘I am not a number’