Aligned with the Raven…

On the Sunday, after the workshop was over and we had packed the cars, a small group of us headed off on what had the feel of a pilgrimage. The rituals of the weekend had been inspired by the land itself and we were to visit one of the sites before Running Elk had to leave us and head north to Scotland.

The story the land had whispered was that of the Clan of the Raven, and the clan was to take on a far greater importance over the course of the weekend than we had realised or written. It seemed only fitting that we take our Companions to the place we call the Raven’s Nest. 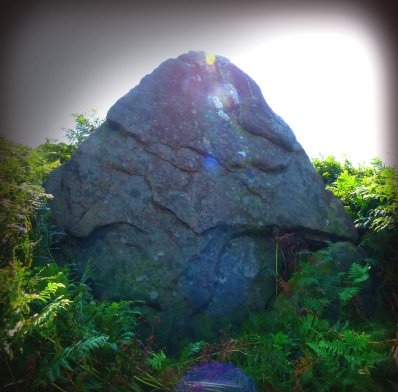 A convoy of cars set out. Running Elk was in the car behind us and it is no exaggeration to say that we could feel him fair oozing frustration at being unable to stop as we drove past ancient and sacred sites, one after the other, with barely a breath in between. The landscape of the Derbyshire/Yorkshire border is like that… which is one of the reasons we love it so much.

I am sure there was a whimper from the car behind as we drove alongside the Ladybower reservoir; the hills beyond are spectacular…and look far from natural. We have yet to climb those particular hills, but we know of ancient remains and the remnants of a stone circle upon the slopes of Crook Hill. In fact, the area is positively littered with ancient remains…stone circles, cairns, carvings… it is a treasure trove. 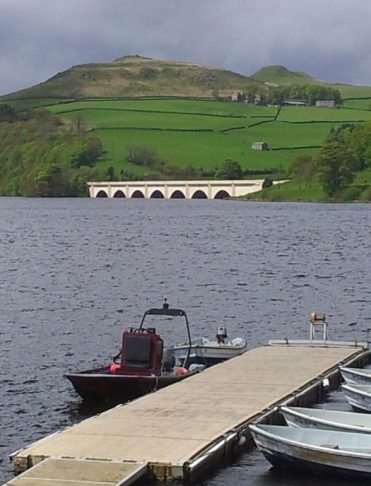 Nick settled himself under the trees to wait for our return as we set off up the hill; although it is a spectacular site, there was no way he would manage the climb. I was none too easy myself, wondering what we would find there…the last time we had taken people to the stone circle, what we had found had been most disturbing. The circle is still used…and not in the most appropriate way. We had returned, though , since then to work at the site and were curious to see how it felt.

Alethea and Deb were away ahead… Alethea, drawn by the land, chose to take her own path, finding each of the sites on the hilltop instinctively. We headed straight for the spirit stone… and even now, I feel a real reluctance to call it by name. 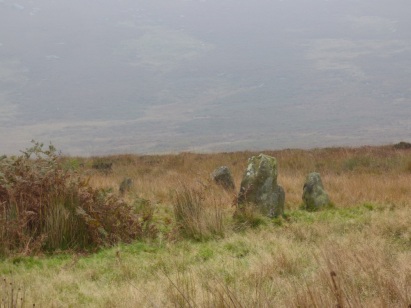 We allowed our companions to explore…it is a big site, not just limited to the stone circle… and  we worked a little more with the place. It was only as we were preparing to leave that I happened to mention a depression, like a bowl in the landscape… something I had seen before but never really registered. Running Elk and I wandered over to have a look…the others were all elsewhere.

There is nothing to see, not really, apart from a clear bowl of land where the vegetation seems not to intrude…always a good sign. Running Elk was calculating sunrises and sunsets, scanning the surrounding hills and wondering how, or if, things might line up.

“Stand there,” he said. “See that notch on the horizon?” I looked and saw where he was pointing. Taking me by the shoulders, he spun me round, one-eighty degrees.

In perfect alignment with the notch and me in the centre of the bowl, the horizon offered us a pyramid flanked by hills. Things got a little weird after that… okay, weirder…as we xplored the ‘feel’ of the place and saw it forcibly eject one of our companions from the space. Apparently, the energies are feminine there… 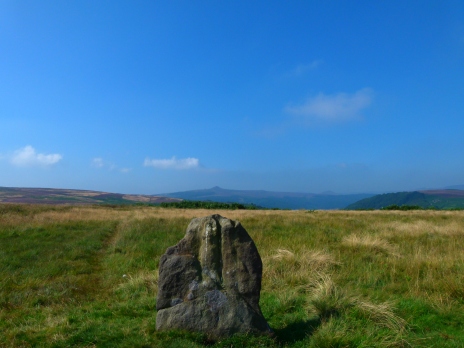 The time together was only marred, though, by its limits. All too soon it was time to collect Nick and hug our Scottish friend farewell. There would be more exploring over the next few days, but not with Running Elk. On the positive side though, we would not have to wait another year to see him as he will be leading the September workshop in Inverurie. And for that, I cannot wait.

Sue Vincent is a Yorkshire-born writer and one of the Directors of The Silent Eye, a modern Mystery School. She writes alone and with Stuart France, exploring ancient myths, the mysterious landscape of Albion and the inner journey of the soul. Find out more at France and Vincent. She is owned by a small dog who also blogs. Follow her at scvincent.com and on Twitter @SCVincent. Find her books on Goodreads and follow her on Amazon worldwide to find out about new releases and offers. Email: findme@scvincent.com.
View all posts by Sue Vincent →
This entry was posted in albion, Ancient sites and tagged ancient stones, Don and Wen, magic, mystery, Mythology, psychology, stone circle, story, Stuart France and Sue Vincent, The Silent Eye. Bookmark the permalink.

16 Responses to Aligned with the Raven…