Silhouette. Image by Nick Verron, who is also partially sighted.

At approximately 18-months-old, I lost the majority of my eyesight due to a blood clot on the brain. While I can distinguish light and dark and discern the outline of objects, I am unable to see detail. So, for example, if a friend were to pass by me I would see an outline and only be aware that it was a friend when they spoke.

I began writing poetry in 2012 and at that time the idea that my visual impairment might impact on the kind of poems I wrote never occurred to me. However, given that several people have commented on my poor vision and how this may impact on my writing, I thought it would form an interesting basis for a post and I am grateful to Sue for agreeing to publish my article.

On Thursday 26 January, I was honoured to appear on Vancouver Co-Op Radio’s World Poetry Reading Series, hosted by Ariadne Sawyer and Neil Ryan. During the show I read several of my poems and entered into a discussion regarding what inspired me to compose them. One poem in particular, “Owl” led to a discussion concerning what impact, if any, my blindness exerts on my writing:

“I have lain awake listening for the owl’s cry.

A note that chills

This bird of prey

Will carry my soul away,

Or so the superstitious say.

While I, in my pride

Signifies that I will die.

The bird has no interest in me

So why can I not be free

That to my window nigh

does rise, then, as suddenly, die?”

The above poem is replete with references to listening. “The owl’s eerie cry” … “Why can I not be free of his cry” and “does rise, then, as suddenly, die”.

As a blind person, I rely to a significant degree on my ability to hear. This is particularly important when crossing busy roads as I am unable to discern the outline of cars until they are practically on top of me. This focus on listening leads me to hone in on the sounds of nature, which perhaps helps to explain why “Owl” is full of references to sounds and listening. Having said that, (and as I pointed out during my interview on Vancouver Co-Op Radio), a sighted person lying in the dark (as I was when the note of the owl reached my ears) would (as with me) have been unable to see the bird and would have been aware of the creature’s call in the same manner as I. Having said that, the sighted person could have visualised the owl in his mind (despite his inability to see it at that moment in time) which may have led to the composition of rather a different poem to that written by me.

As pointed out earlier, I do possess limited vision. I can, for example discern the difference between light and dark. Come the night, the little vision I do possess is rendered  virtually useless. The capacity to distinguish between dark and light is, I believe exemplified in the below poem entitled “The Dark”:

I shut out the night

While beyond my drapes

When observing the scene, which led to the composition of “The Dark”, I was acutely aware of the bangs being produced by fireworks. I was, however also cognisant of the flashes lighting up the dark night. Then, of course I closed my curtain shutting out the night, although the dark remained patiently waiting, on the periphery, as it does for all of us.

Having written the above, I realise that although I was (at the time of observing the scene, which caused me to pen this poem) aware of the flashes emanating from the fireworks, there is, in the poem no reference to this fact (merely a reference to fireworks “celebrating something” which does, I believe indicate that visual stimuli is not as important to me as it is to a sighted person.

Having said the above, many of my readers are unaware that I am visually impaired and only become cognisant of this fact when it is mentioned by me in a post or on those rare occasions when I meet one of them face-to-face. The fact that many readers don’t pick up on my visual impairment perhaps demonstrates that the influence exerted by my blindness on my poetry is not obvious unless the person reading knows that I am blind.

In conclusion, I believe that my poor vision exerts an influence on my verse in that I am very aware of sounds and other non-visual stimuli. Having said that, the fact that many of my readers are unaware of my blindness until they are informed of it by me, indicates that it exerts a subtle rather than an obvious influence on my writing.

Prior to closing, I would like to say a few words regarding how my experience of reading the many excellent blogs out there can be improved. As a visually impaired person it is extremely helpful when people describe images on their blogs/websites. Just having my screen reading software detect an untagged image gives me no information as regards it’s content and my life and that of other access software users would be greatly enriched where bloggers to provide a description of the images appearing on their sites.

Kevin Morris was born in Liverpool. Having lost most of his vision in early childhood, his love of literature began as he listened to the tales read to him by his grandfather. In later years, Braille opened the world of  independent reading. Only a tiny proportion of books are available in braille, but Kevin found it amazing to be able to sit with a book on his knee reading for himself. Besides braille he was also a huge consumer of spoken word cassettes, everything from Treasure Island to Wuthering Heights. Modern text-to-speech technology has now opened a wider world of literature to him.

Kevin read history and politics at university and eventually graduated with an MA in political theory.

He began to write seriously in mid 2012, using software that converts speech into text and Braille. He now lives and works in Crystal Palace, London and enjoys  walking in green places with his guide dog Trigger, listening to a wide variety of music and socialising with friends. 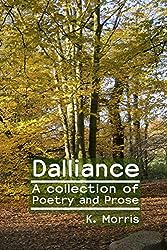 In this collection of poetry and prose the intimate connections between the natural world and humanity are explored, while a number of pieces are of a humorous nature.

I loved the sheer variety of the pieces in this book – and the lyrical nature of the writing. Most beautiful. Two, in particular, stood out for me: ‘Dark Angel’ and ‘The Great Cycle’. Both evoked the connection we have with the world – though in very different ways, one being a physical bond with the natural world, the other a more inanimate ‘friend’! I thoroughly recommend this exquisite little collection.

Find all Kevin’s books on Amazon

Sue Vincent is a Yorkshire-born writer and one of the Directors of The Silent Eye, a modern Mystery School. She writes alone and with Stuart France, exploring ancient myths, the mysterious landscape of Albion and the inner journey of the soul. Find out more at France and Vincent. She is owned by a small dog who also blogs. Follow her at scvincent.com and on Twitter @SCVincent. Find her books on Goodreads and follow her on Amazon worldwide to find out about new releases and offers. Email: findme@scvincent.com.
View all posts by Sue Vincent →
This entry was posted in Books, Guest post and tagged senses in writing, sight, visual impairment, writing. Bookmark the permalink.