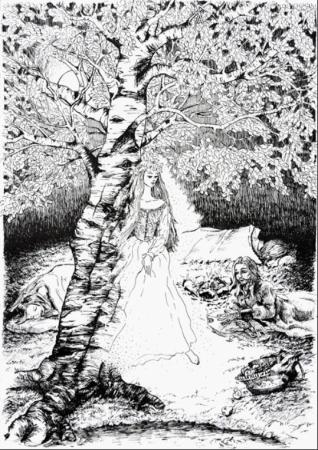 The Birch Maiden is a Scottish folktale about a beautiful fairy inhabiting a birch tree. One evening she is tempted by a basket of apples left on the ground by soldiers sleeping in the grove. One young handsome soldier awakens, and seeing her is instantly smitten. When discovered, the shy creature flees into her tree, which only makes the soldier desire her more. Eventually he learns of a way of making the fairy maid fall in love with him and she forsakes her tree to become his bride.

Here the story takes various twists and turns depending on the tradition that preserved it. Popular tales are rarely straight forward. Stories diverge due to being passed down for hundreds of years within the families of professional storytellers, from father to son. No doubt, some versions are embellished with orphaned fragments of otherwise forgotten tales.

Sometimes the fairy can only be freed if the soldier speaks her name three times under a waxing moon. Cunningly the soldier learns her name by hiding in the woods and listening to her sisters as they dance and sing in the glade. In this version the maid may sicken and die when she forsakes her tree for a mortal man’s love. In other versions she loses her memory, until one day she learns, from the song of a tame robin, her tree is dying and abandons her husband to resume her former life in the wildwood.

In darker versions, the soldier tempts her with an enchanted apple, obtained from a witch (sometimes the forest queen in disguise); traded for an impetuous promise to sacrifice what loves him most. He forgets to warn his wife to send out his favourite hound to greet him when he comes home from war. Thus his wife, or young daughter, is condemned to return to the tree, and the soldier learns the harsh penalty of trafficking with fairies.

Sue Vincent is a Yorkshire-born writer and one of the Directors of The Silent Eye, a modern Mystery School. She writes alone and with Stuart France, exploring ancient myths, the mysterious landscape of Albion and the inner journey of the soul. Find out more at France and Vincent. She is owned by a small dog who also blogs. Follow her at scvincent.com and on Twitter @SCVincent. Find her books on Goodreads and follow her on Amazon worldwide to find out about new releases and offers. Email: findme@scvincent.com.
View all posts by Sue Vincent →
This entry was posted in History, Mythology and tagged Finn Mac Cool, Myths and legends, Paul Andruss, Thomas the Rhymer. Bookmark the permalink.