You’re neither here nor there. You’re waiting for something to happen that maybe you have very little control over.

I’m currently in the process of trying to move house. I made the decision to move. I know where I want to be. But I am content still being here, although I’m looking forward to the “new” place.

I realise the move may never happen. There are so many things that could prevent it. I’m not being fatalistic about it. If the move doesn’t happen now, it will do in the future.

Meantime, I am finding it difficult to live in the present, to be. There is so much to do in both selling and buying a house. I’m very glad I have a writing discipline that I adhere to most days. And on days when I forget to write, or feel too tired, I don’t beat myself up.

Since having cancer, I choose to do what I want to do, not what I feel I ought to do. Writing a haiku and one other short form poem every day really enables me to be. It helps ground me and brings me back to the real reality of here and now, not the hoped for future reality that might never be.

So, I’m still enjoying the misted marshes and the flat silver line of the sea on the horizon. I’m still experiencing the chilly feel of crunched frost beneath my boots and looking after a large, black greyhound…

Another thing cancer taught me is to not cling on to the familiar and comfortable, but to embrace what scares me and to take more risks. Life is such a fragile thing but it is a waste to just continue doing what you’ve always done because it makes you feel safe.

One of the new things I did in 2016 was to get 5 books published. I’d been toying with the idea of self-publication for ages and experiencing near death and going through all the trauma of cancer made me realise how I could have died with only one paperback published.

So, I got 5 e-books out into the big, wide world last year. (Two are now available as paperbacks!) It was a huge step; exposing my creations to the real world. What if no one bought any copies? But of course they did! Now comes the hard slog of promotion and marketing.

I had hoped to be launching my second short story collection right now, but with the house move appearing to be taking place, all my publishing plans are on hold until I know where I am.

I’m not sure if it was a co-incidence or not. When I was putting together this new story collection (Xmas @ Camelot II & Other Stories) I realised that a lot of the 10 tales were about transition and choices; things that I am experiencing right now. There are transitions between organic beings – shape shifting, transitions from light into darkness, from slavery to freedom and many more. Choices also form a central role in many of the stories; in taking sides, in deciding to break free, in making the wrong choice…

Although I do not let the fact that I have had cancer define me, the whole experience has changed me. I am more tolerant in some ways, less tolerant in others. I am more focused on what I want to achieve and how I go about achieving my aims.

I have learnt to write at any time in any circumstances. I can write in peace and quiet with no one else around. I can write while the TV is blaring out and the cooker is bleeping at me, telling me I need to get back to the kitchen.

At some point during the 9 months of illness, surgery and chemotherapy, I unintentionally developed a way of surviving inside my head. No matter what is going on or how awful circumstances may be, I can always escape to my safe place; my writing. Right now, I’m writing a new fantasy series, 200 words a day in my journal. Before cancer I had to type great swathes into the computer. Now, I find I can pick up where I left off the day before and handwrite the words. My writing is a lot sparser, more focused and I’m hoping with this new approach to things, there’ll be less re-writing to do!

Although I write mainly fantasy, you don’t need to be a Tolkien fan to appreciate my books. I write about real people (well, they’re real in my head and they talk to me!) and love humour. As for elves, I think I’ve only mentioned them in passing in Dragonscale Leggings and The Rusalka Ritual and they’re minor characters who are half-elves! I write about a female dragon slayer, strong-minded women, lonely princesses, feisty serving girls, depressed men, evil counsellors and handsome harpists.

My poetry collection, Insides, is firmly based in the real world and takes the reader through my journey of cancer, surgery, chemo and recovery. I wish I had known more about what cancer sufferers go through before I discovered I had the disease. So I’m hoping that this collection will enable those lucky enough not to have cancer, to get a glimpse into the dark yet compelling world of a cancer sufferer.

Freya Pickard is the author of Dragonscale Leggings, The Rusalka Ritual & Other Stories, The Essence of Thyme, Insides and Vintrig’s Kingdom. Currently living in the South of England, Freya writes about imaginative worlds. These are worlds that could be real in a parallel universe or another time dimension. She does not promote escapism; instead she takes her readers into a refreshing place so that they return to their normal lives feeling strengthened and renewed.

The Essence of Thyme 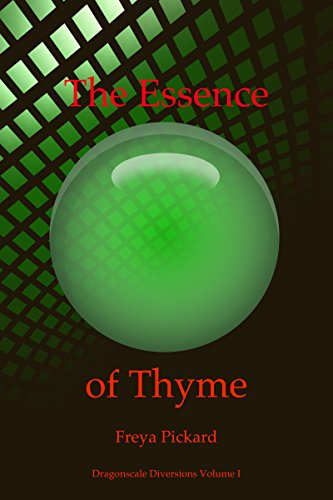 An oblique re-telling of Sleeping Beauty. The Essence of Thyme allows Parsley the limelight (for once) as she pursues her dream of finding a handsome prince and true love. But messages from Merlin come in the form of riddles. Just who is this mysterious Nimue? Why has an enchanted forest suddenly appeared before Castle Thyme? Parsley veers between absolute determination and terror in her quest to find her true love. Can she and Dracomagan solve the riddle? Can they break the spell that holds Castle Thyme in its insidious grip?

What would you do if you woke up in a place you did not recognise, with no memory of who you are? Would you fall asleep again and hope to remember when you woke up next? Would you hide yourself away, giving into self-pity? Or would you walk out and explore this strange new world, hoping to recover your memory on the way?

When Isu Magan, heir to Vintrig’s Throne, finds the journal of a vanished Scriber, her perceptions of history and the truth are challenged. A growing distrust of her loyal and powerful Counsellor initiates rebellious and frightening thoughts within her heart. Adding to this disruption of her ordered life, Isu finds herself attracted to the itinerant musician, Sama Conn. As the endless winter thaws, and a brief summer returns to the Castle, Isu longs to learn to dance, but fears her feelings towards Sama. Knowing she cannot love a mortal, the princess struggles with an increasing infatuation that could lose her the throne, and possibly her life.

Everyone in this tale is challenged and empowered by the arrival of Sama Conn and his travelling musicians. But Jya, the Counsellor, appears set against them and the change they bring to Vintrig’s Castle. The balance of power is threatened, and each person has to decide which party they will ally themselves with. Against this backdrop of scheming and fear, rises the question, again and again; what is the importance of Throne Peak?

Told from five viewpoints; Isu Magan, her maid, her steward, an elderly traveller and the anonymous Scriber, Vintrig’s Kingdom is a tale of romance, intrigue and dark history.

This tale is set within the mountainous, winter-bound walls of Vintrig’s Kingdom. Instead of the usual “quest”, the journey each person treads is a journey of the soul, into the innermost recesses of their fear to question the validity of the history they think they know.

The Rusalka Ritual and Other Stories

Five tales encompassing human emotion; disappointed expectations, self-sacrificing love for the unlovable, will power that overcomes dark enchantment, bravery in the face of evil and fear of the unknown in a hum-drum life …

Five tales from Freya’s fertile imagination to delight and intrigue you; a western setting, a tragic story, a twisted faerie tale, a sword and sorcery romp and a warning about checking your car brakes …

Five tales set in fantastic locations; an arid canyon, a smoke-wreathed ale house, a moonlit sea, a haunted inn and a golf course …

In 2014 Freya Pickard was diagnosed with bowel cancer.

Insides is her inner journey, charting her progress through colostomy, removal of the tumour and chemotherapy.

Dealing with the dark matter of cancer and facing death three times in six months, this collection is a positive affirmation of hope and life.

To tell the tale of her darkest nightmare, Freya uses blank verse, haiku, tanka, cinquain, elfje, lantune and her very own freyan verse.

The poetry ebbs and flows from despair and fear to determination and sheer grit to get her through to a stage of recovery.

But, as Freya finds and expresses through her journal notes which find their way into short form poems, recovery happens in many stages and isn’t as immediate as she hoped or wished.

This collection will bring comfort and renewed determination to anyone dealing with a life-threatening illness. And, it is hoped, that those on the edges, watching from afar, will be enabled to identify more with the sufferers of cancer.

Sue Vincent is a Yorkshire-born writer and one of the Directors of The Silent Eye, a modern Mystery School. She writes alone and with Stuart France, exploring ancient myths, the mysterious landscape of Albion and the inner journey of the soul. Find out more at France and Vincent. She is owned by a small dog who also blogs. Follow her at scvincent.com and on Twitter @SCVincent. Find her books on Goodreads and follow her on Amazon worldwide to find out about new releases and offers. Email: findme@scvincent.com.
View all posts by Sue Vincent →
This entry was posted in Blogging, Books and tagged cancer, changes, fantasy, Life, Poetry. Bookmark the permalink.