Discovering Albion – day 4: Snow in Them There Hills… 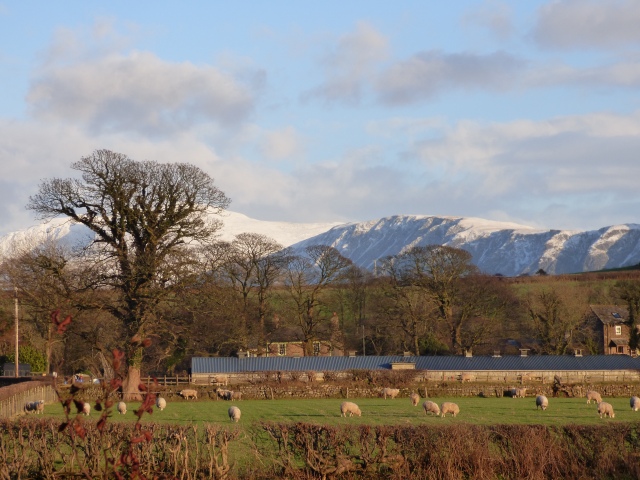 We decided that it would be sensible to take the coast road north… it is both unusual and rather nice when ‘sensible’ walks hand in hand with preference. We had seen the snow capping the distant hills of the Lake District across Morecombe Bay and thought that the salt air would be beneficial on that score. And anyway, who doesn’t like the seaside? Particularly in winter when there are no crowds and we had many of the roads pretty much to ourselves.

Had we not seen the third of our triad two days before we would have called him to come for coffee in Don Pedro’s café. As it was, we simply speculated on which one Steve was referring to in his stories as we sailed through Grange-over-Sands and onwards towards our next destination, skirting the snow covered hills.

It was beautiful… perfect in fact. To our left we had the sea, around us the green of the foothills. Close enough to see, but not to pose a problem, we had the high, white peaks of the Lakes in all their pristine beauty. It was just a shame that the engine warning light chose to come on… Given the panic a few days before to get her fixed and the mechanic’s expensively pursed lips with his ‘can’t guarantee I’ve fixed it…’ I was a tad apprehensive. We would see.

What we didn’t seem to have were many places where we were able to stop. The camera rested mournfully on the back seat as I drove the narrow, serpentine road, occasionally breathing my delight at the landscape. We were heading for Gosforth and, just for once, we had done at least some homework the night before, checking that there were several pubs there that offered accommodation. Mid-January we thought we would have little problem finding rooms for the night.

Sue Vincent is a Yorkshire-born writer and one of the Directors of The Silent Eye, a modern Mystery School. She writes alone and with Stuart France, exploring ancient myths, the mysterious landscape of Albion and the inner journey of the soul. Find out more at France and Vincent. She is owned by a small dog who also blogs. Follow her at scvincent.com and on Twitter @SCVincent. Find her books on Goodreads and follow her on Amazon worldwide to find out about new releases and offers. Email: findme@scvincent.com.
View all posts by Sue Vincent →
This entry was posted in adventure, Ancient sites, Photography, scotland road trip, travel and tagged Cumbria, Gosforth, Romans, snow, Vikings, Wastwater, Western lakes. Bookmark the permalink.