Solstice of the Moon: Halfway to Paradise… 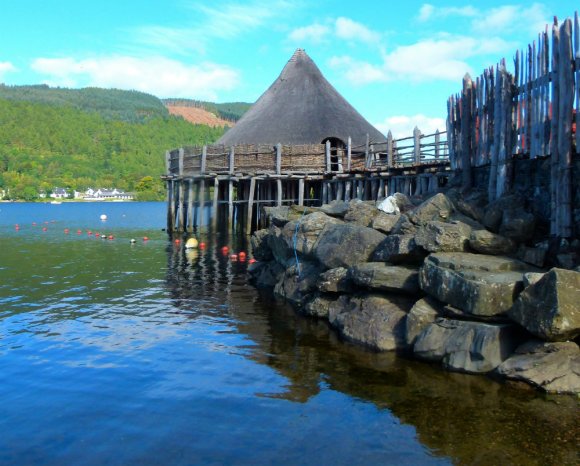 The misty morning had turned into the most glorious autumn day as we left Glen Lyon and headed towards Loch Tay. We wanted to try and get a shot of the crannog that has been built on the lake at Kenmore. The crannog is a reconstruction of one of the lake dwellings that were built here two and a half thousand years ago. In design, they are very similar to the roundhouses we had seen in Wales at Castel Henllys, but these homes built on submerged islands would have been easily defended. There were once at least eighteen crannogs in the loch, four of them very close to the modern reconstruction that is based on the finds made by the underwater archaeology team.

We had decided to take the road along the side of the loch for a last meander before reluctantly joining the motorways around Glasgow; we really did need to get back to England, like it or not, as we were meeting a friend the following morning. The loch is almost fifteen miles long, nearly five hundred feet deep and up to a mile and a half wide. Fifteen miles wouldn’t take long, but would be a nice end to our wanderings before being devoured by modernity. But as the great Scottish poet Robert Burns once wrote, “ the best-laid schemes o’ mice an’ men gang aft agley…” and there was a ‘road closure’ sign. 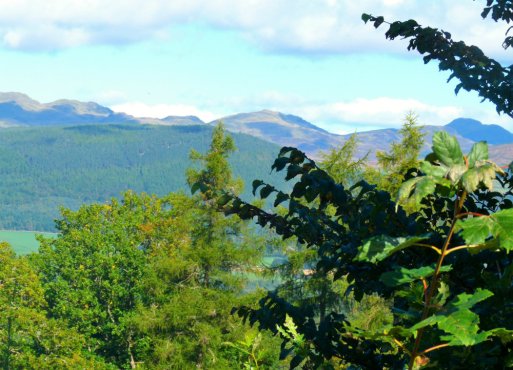 The trouble was, the sign was positioned at the junction of two narrow roads, with no indication to which it was referring. One ran alongside the loch, the other, even narrower, appeared to climb the mountain almost vertically… and not the best idea with a little car built for city roads. The sign also had details of the times of the closures and we had plenty of time to get along the loch… or so we thought…even though we know that narrow country lanes and apparent distances on the map may bear little relation to reality. What we were unable to take into account was the nature of the lane we were about to travel…

“It’s about as close to Paradise as you could get…” My companion’s voice was hushed. I held my breath and blinked back tears, trying unsuccessfully not to squeak.
“The reflections…” You could barely tell where land and water met. The loch is ringed with hills and mountains, the sky was now a perfect blue scattered with fluffy, picture-postcard clouds. No matter which way you looked, it was perfection. Utterly breathtaking. 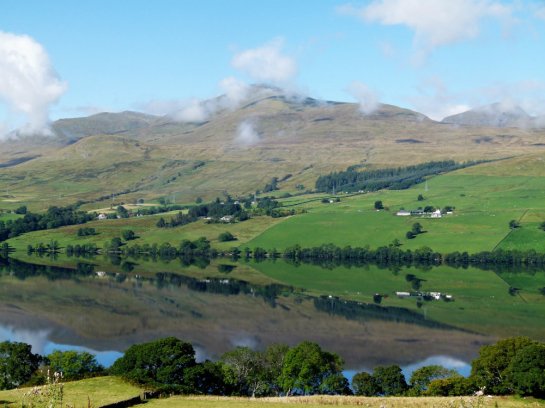 We had to stop. A number of times. And that was just to look and take photographs. We also had to squeeze into the side of the track many times to let oncoming cars past as there was room for only one. The cars were reassuring though…they must be coming from somewhere, so this road couldn’t be closed. We could take our time… 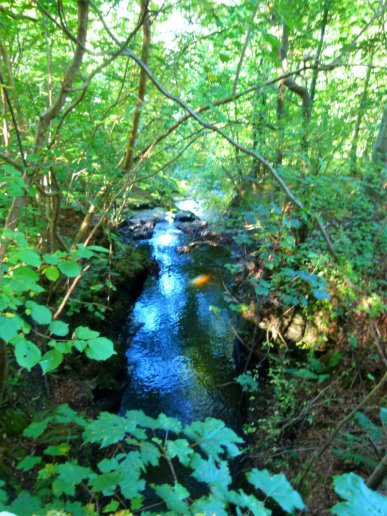 So we did, stopping wherever we could… even the smallest curve in the road. And as if the loch were not enough, we passed streams and waterfalls on the landward side, pretty hamlets and high hills… there was even a standing stone, alone in a field…

I think I could spend forever just walking this one road and not lose the sense of awe at the majesty and beauty of the landscape. Whenever there was a break in the trees, wherever we managed to pull the car over, there was a magical land of pure delight…

…until we saw the sign that said, ‘road closed’. Hmm. Luckily, however, the sign was close to an unexpected inn… and in we went for coffee and information. There was another road leading away from the inn and up into the hills, but the waitress assured us it led only to a village and no farther. We were going to have to turn back. What a dreadful hardship to have to drive all that way back through such a landscape…

Sue Vincent is a Yorkshire-born writer and one of the Directors of The Silent Eye, a modern Mystery School. She writes alone and with Stuart France, exploring ancient myths, the mysterious landscape of Albion and the inner journey of the soul. Find out more at France and Vincent. She is owned by a small dog who also blogs. Follow her at scvincent.com and on Twitter @SCVincent. Find her books on Goodreads and follow her on Amazon worldwide to find out about new releases and offers. Email: findme@scvincent.com.
View all posts by Sue Vincent →
This entry was posted in adventure, albion, Ancestors, Ancient sites, france and vincent, Photography, Sacred sites, scotland road trip, travel and tagged beauty, Crannog, Loch Tay, reflections, round house. Bookmark the permalink.