Solstice of the Moon: Circles Within Circles 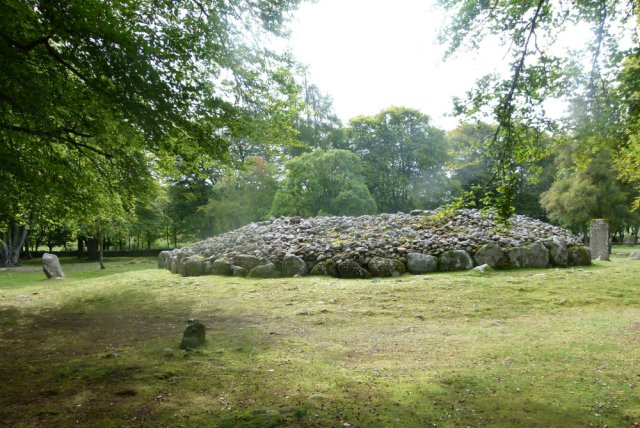 “I don’t know how you have the temerity to even think about writing up Clava… The place is on a different planet… galaxy… something…” All true. I have no idea where to start… it is a place that needs more than words, but words are all I can bring to the page. It is beautiful too, with the white stones contrasting with the green of the grove of trees in which the cairns now stand. In many ways, I’d just like to forget all the factual stuff and wax lyrical about the place, but it does have to be seen in a historical context before the sheer awesomeness of the place can even be touched.

The problem with Balnuaran Of Clava, the Clava Cairns, was immediately obvious… in spite of the fact that it lies just outside of Inverness and therefore over five hundred miles from my home, we would need far more than one flying visit to even begin to get our heads around it. It is a big site, with a group of three principal cairns, all with circles of standing stones around them. Sounds simple enough… but that is far from the truth.

A cairn is a burial mound raised over the dead. Some have a central chamber, others are more in the nature of simple grave markers. They are made by piling up stones and some may then have been covered with earth or turf. 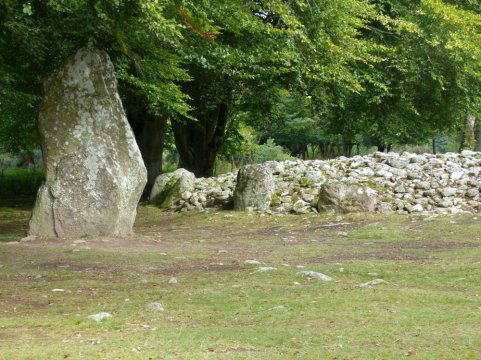 Most of the cairns we encounter these days are small; the larger cairns have all too often been robbed for building stone over the centuries, or are in such disarray that it is almost impossible to get a true sense of how they would once have looked. Here, there is no such difficulty… nor are they just simple piles of stone.

They are beautiful and complex feats of monumental architecture that date back to the Bronze Age. There are many similar cairns of this design still dotted around the landscape of the area. A central chamber, walled with carefully laid stones, held the remains of the dead. Where those remains have still been present when the tombs were excavated, it seems that these great cairns were designed to hold only one or two people.

The Neolithic passage graves which were their forerunners were places of communal burial and communion, where the bones were carefully stored and ritually revisited. Here, many of the surviving cairns seem to have been built with no entrance, reflecting a change, both in the way the dead were viewed and the way they were treated within the community.

Sue Vincent is a Yorkshire-born writer and one of the Directors of The Silent Eye, a modern Mystery School. She writes alone and with Stuart France, exploring ancient myths, the mysterious landscape of Albion and the inner journey of the soul. Find out more at France and Vincent. She is owned by a small dog who also blogs. Follow her at scvincent.com and on Twitter @SCVincent. Find her books on Goodreads and follow her on Amazon worldwide to find out about new releases and offers. Email: findme@scvincent.com.
View all posts by Sue Vincent →
This entry was posted in adventure, albion, Ancestors, ancient mound, Ancient sites, france and vincent, historic sites, Photography, road trip, Sacred sites, Scotland, Stuart France and Sue Vincent, travel and tagged Bronze Age, burial mounds, Clava Cairns, hut circle, Inverness, passage graves More stats. Bookmark the permalink.