Hello Sue and hello readers. Thank you for inviting me back.

I thought I might tell a little of the back story to my new poetry collection – The New Asylum a memoir of psychiatry.

For this article, I felt it might be of interest to readers of your blog to get an introduction to myself as a child associating with an old institution – Mayday Hills Lunatic Asylum, over here in Beechworth, the town I grew up in, in Australia.

There is an odd coincidence in that just yesterday (the day prior to my writing this article) there was a fire in some of the old buildings remaining on the Mayday Hills site. I felt that was a little bit eerie, given my current preoccupation with all things Mayday, just at present. It was only a small fire, as it turns out, but still . . .

I popped a brief article about it on my blog, and the link is here, if you care to see a photo.

When I was first preparing my manuscript of The New Asylum, I broke it into chronological stages dealing with childhood, student nursing and so on. I felt that the collection was incomplete, though, and needed an introduction, which led me to contemplate my own sense of the inevitability involved for a young man from a small town steeped in the history and clutches of the Asylum to end up being drawn beyond the ha-ha wall and becoming a creature of what is now known as mental health.

Growing up, I had sworn that I would not be like the rest of my family, settling in to the institutional life for the rest of my days. It seems the fates had other plans. The opening poem in the collection is titled mental health creature, and it has been my pleasure to include it in a brief series of mp3 recordings that I’m delighted to share with you and your readers, Sue.

My earliest memories of the old Asylum revolve around my mother. Mum worked as an untrained member of the nursing staff, at a time when trained nurses working in mental health were very few. The Asylum had as many as 1,200 residents at that time and even someone such as my mother – an immigrant not long off the plane and with few English language skills was able to find work.

Few women had licences to drive, or access to cars with which to transport themselves to work, so the Asylum helped out by providing a taxi run from the Post Office in the town to the administration building on the Asylum grounds. A journey of around three kilometres, and my memory of it is reflected in the poem taxi shuttle.

Mum passed away this year (2019), back in July, and when I look over my body of work I can see just how indebted I am to her as the inspiration behind some of my more emotionally evocative poetry. One such poem was among the first I wrote as part of the series that became The New Asylum. The poem is called the smell of stockings and it never fails to bring an exact odour to my mind and the sighs and sense of great relief my mother felt at the end of a long and difficult day in the wards.

I feel that I must have been a very ungracious child when I recall my reactions to the smell and how difficult it was for me to hide my disgust.

There were better times, though, for mum and for me. Times when I would visit where she was working on the wards – generally on the Weekend, when the Charge Nurse wasn’t on duty to disapprove of small strangers upsetting the necessary routines. Times when that strange dessert concoction ‘junket’ was mandatory on the menu for a Sunday.

The wards were segregated along gender lines and also between psychiatry and what was then known as mental retardation. These visits became my first introduction to the female inmate residents of the psychiatric side of the lunatic asylum.

As children in the 1960s, one of our fads was the collection of picture cards or plastic toys that were included in various breakfast cereal packs at the time. Weet Bix, Vita Brits, Corn Flakes. All the cereals had them and I was as keen as mustard to collect my fair share of them. I had a small advantage, however, because I knew My Eugene, who managed the supply of stores for the whole institution . . .

There is much more in The New Asylum. Stories that are disappearing or unlikely to see the light of day unless I tell them. Unless you read them.

If you’re able to get a copy of The New Asylum, I do so hope you enjoy them and that you are able to picture a small boy growing to manhood and into his profession as a psychiatric nurse, starting with a gathering of blue uniforms outside the town post office and progressing through the whole of my life.

The New Asylum: A Memoir of Psychiatry

The New Asylum is the third volume in a series of free-verse poetry anthologies and personal memoirs from Australian author Frank Prem (Small Town Kid, Devil In The Wind).

This collection is an exposé of life in the public psychiatric system, spanning five decades and describing sometimes graphically, sometimes ironically, often poignantly, and always honestly, a search for meaning in extraordinary and often incomprehensible circumstances.

The journey begins with childhood experiences of watching immigrant parents earn their living in the Mayday Hills Mental Asylum… progresses through the oddities and antics of psychiatric nurse training in the 1970s… on to the high-pressure coalface of managing regional centres facing an inundation of modern urban challenges… and finally, settles into the generally calmer waters of a small town residential facility.

Join Frank Prem on his New Asylum journey, and discover what it means to become that particular ‘mental health creature’ that is a psychiatric nurse.

Frank Prem has been a storytelling poet for forty years. When not writing or reading his poetry to an audience, he fills his time by working as a psychiatric nurse.

He has been published in magazines, e-zines and anthologies, in Australia and in a number of other countries, and has both performed and recorded his work as ‘spoken word’.

He and his wife live in the beautiful township of Beechworth in northeast Victoria (Australia).

Other Publications by Frank Prem 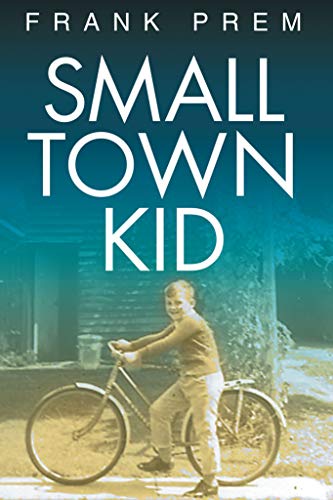 Small Town Kid is the experience of regional life as a child, in an insular town during the late 1960s to the mid-1970s, remote from the more worldly places where life really happens, in a time before the internet and the online existence of social media.

It is a time when a small town boy can walk a mile to school and back every day, and hunt rabbits with his dog in the hours of freedom before sundown. He can hoard crackers for bonfire night and blow up the deputy school master’s mailbox in an act of joyous rebellion.

It is a time when a small town teenager will ride fourteen miles on a bicycle for his first experience of girls, and of love. A time when migrating from a foreign country to a small town means his family will always feel that they are strangers, while visitors to the town are treated like an invading host.

It is also the remembrance of tragedy for inexperienced friends driving on narrow country roads.

This collection of poems and stories shares the type of childhood that has mostly disappeared in contemporary times. Come and revisit it here, in the pages of a Small Town Kid.

“Frank Prem is a storyteller and poet of an unusual kind. He writes about everything with a vision most of us do not see until he brings it forth.”

Herja, Devastation is a tale of
myth and mortality,
wielder and implement,
love and destiny.

Free-verse poetry combines with short prose in the style of an Eddic tale modernised.
* * *
The legend of Valkyrie breathes, as Herja, Devastation, once wronged, aims her mortal agent at her enemies.
Her man bears this tale of vengeance in service to a higher, eminently more noble being. He is her assassin and tool, and she is his destiny and dignity.
In the dirty business of death on demand, a purity of purpose lights the path as he seeks questions, provides answers and justice on her word.

This blending of literary forms creates a unique nouveau noir style for the 21st Century.
Do you dare to tread the dark side?

Devil In The Wind

Devil In The Wind is an account of catastrophic fire and its immediate aftermath.

In this 21st century, the whole world seems to be on fire. America burns. Europe burns. Greece is reeling after its own tragedy of fire.

And Australia burns, as it has always done, but now so much more fiercely.

In February 2009, wildfires burnt through entire communities, taking 173 lives and injuring hundreds, while destroying thousands of houses and other buildings. Up to 400 fires destroyed 450,000 hectares of forest, native fauna and habitat, livestock and farmland.

In the aftermath of the fires, the voices of people who had lived through the experience — victims, rescuers, and observers — were spoken and were heard.

Devil In The Wind is Frank Prem’s poetic anthology of the personal, and very human, accounts of those who themselves experienced and survived Black Saturday. Poetry writing that interacts directly with readers emotions.

Sue Vincent is a Yorkshire-born writer and one of the Directors of The Silent Eye, a modern Mystery School. She writes alone and with Stuart France, exploring ancient myths, the mysterious landscape of Albion and the inner journey of the soul. Find out more at France and Vincent. She is owned by a small dog who also blogs. Follow her at scvincent.com and on Twitter @SCVincent. Find her books on Goodreads and follow her on Amazon worldwide to find out about new releases and offers. Email: findme@scvincent.com.
View all posts by Sue Vincent →
This entry was posted in Guest post and tagged Amazon, Australia, author, book, memoirs, mental health, Poetry, spoken word. Bookmark the permalink.