Sue’s latest prompt for #writephoto is this 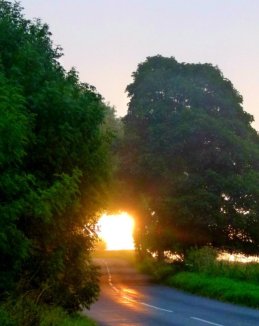 PC Norman Pottinger parked his Panda car by the bridge over Jefferson’s Piddle and climbed out. How did that happen? One minute he’s humming a piano piece by Dvořák, the next a hayrick in Jefferson’s Parcel bursts into flames like a crazy firework.

Norman took of his cap and scratched at the thin threads of hair on his scalp. This was a third burning stack in as many weeks. It was getting beyond a joke, and a coincidence. He called it in and waited.

‘What you going to do then, Norm?’ Peter Jefferson appeared as if from nowhere. To Norman he seemed startled. ‘That’s the second of my ricks targeted. We all know who’s doing it. Peterson. He’s out to ruin me.’

‘I know your families don’t get on but where’s the evidence, Peter?’

Peter shrugged. ‘If you don’t stop it, it’ll get worse. He’ll have a go at something really valuable.’ He turned away. Norman watched him go; he was an arrogant bully at school, the son of the largest farming family locally and not much had changed.

Sue Vincent is a Yorkshire-born writer and one of the Directors of The Silent Eye, a modern Mystery School. She writes alone and with Stuart France, exploring ancient myths, the mysterious landscape of Albion and the inner journey of the soul. Find out more at France and Vincent. She is owned by a small dog who also blogs. Follow her at scvincent.com and on Twitter @SCVincent. Find her books on Goodreads and follow her on Amazon worldwide to find out about new releases and offers. Email: findme@scvincent.com.
View all posts by Sue Vincent →
This entry was posted in photo prompt, Photography and tagged arson, crime, fiction, mystery, police. Bookmark the permalink.