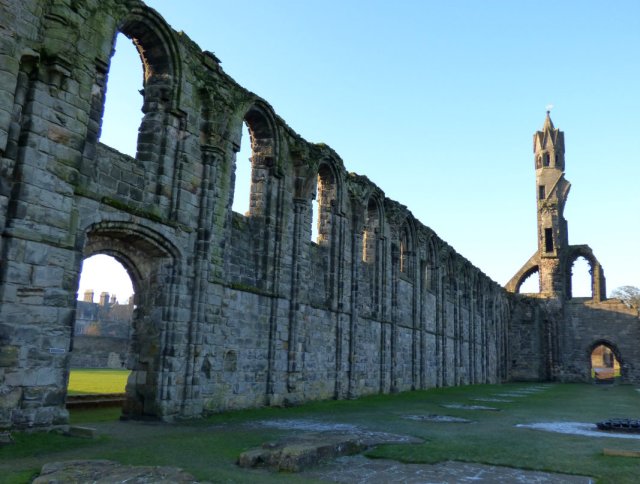 We didn’t go to the Roman Catholic Cathedral where the relics of St Andrew are now housed. We were here to see the ancient places where they had once been… lost now to time, buried perhaps somewhere in the vast graveyard of the precinct by a devout monk determined to save them from those who would despoil them… or perhaps taken secretly to Rome for safe keeping.

A memorial cross of Celtic design was framed between the points of the tower as we walked up to the Abbey. We were pleased by this… the crosses had turned out to be a major part of what we were doing and had been so, if we thought about it, since a foray with the camera before Christmas. Back then, we didn’t really realise… now, we were beginning to. This trip had proved itself to be all about the stones and we were about to find stones enough to keep us occupied for quite some time…

“It’s a ruin.” The disappointment in my Companion’s voice was patent. We’re not all that much into ruins… unless there is something inherently special about them. Although, technically, many of the sites we love are ruins; the old stones of the circles thrown down or removed, the landscapes reshaped by the plough. But somehow where the land itself still makes its presence felt, it doesn’t matter.

The monumental skeletons of Abbey and Castle do not attract us as much as the continuous history we find in the little churches and the flower-decked circles that we find where the touch of the sacred is still warm in the stones. There is a sanctity in the earth itself that makes itself known to those who come with open heart and mind.

Sue Vincent is a Yorkshire-born writer and one of the Directors of The Silent Eye, a modern Mystery School. She writes alone and with Stuart France, exploring ancient myths, the mysterious landscape of Albion and the inner journey of the soul. Find out more at France and Vincent. She is owned by a small dog who also blogs. Follow her at scvincent.com and on Twitter @SCVincent. Find her books on Goodreads and follow her on Amazon worldwide to find out about new releases and offers. Email: findme@scvincent.com.
View all posts by Sue Vincent →
This entry was posted in adventure, Ancient sites, Photography, scotland road trip, travel and tagged Abbey, cathedral, celtic cross, Norman architecture, Robert the Bruce, St Andrew, St Rule. Bookmark the permalink.