“Where did you spend your holiday?”
“In a graveyard.”

Well, a whole selection of graveyards really, the length and breadth of the country. And we were on our way to another one… the second of the day. Not that there is anything wrong with that. Even in the centre of a city there is usually that green space to provide an oasis of peace and tranquillity and a haven for birds. The contemplation of the inevitability of death and the finite nature of our little human lives is no bad thing either. It is an affirmation of life.

We had headed for the centre of Dunfermline, a city three miles north of the Forth of Firth and, until the seventeenth century, the royal capital of Scotland. Man has lived here since Neolithic times, but it is the connection to the Scottish Kings for which it is best known. Malcolm III, King of Scotland, married Margaret here, who would later be canonised as Saint Margaret. She was a Saxon princess, sister of Edgar the Ætheling and mother of three Scottish Kings. The cave where she would go to pray still remains by the river. She established the church of the Holy Trinity, which later became an abbey in AD1128. Dunfermline remained the royal seat until the Union of the Crowns in 1603. 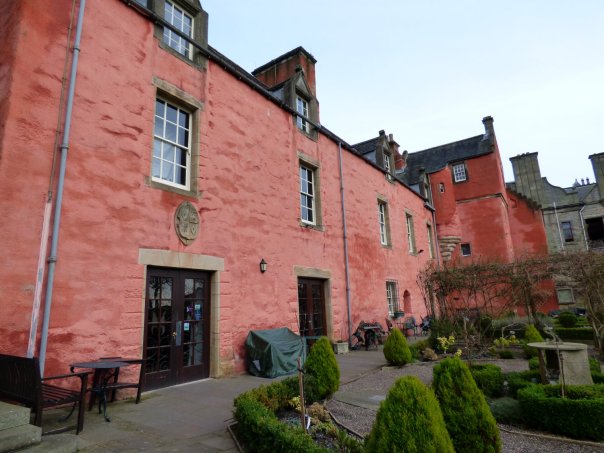 Much of the city was destroyed in a great fire in 1624. A few of the ancient buildings survived, but a good deal of the city is more modern. Many buildings bear the name of Andrew Carnegie, a poor Dunfermline lad whose rags-to-riches story made history on both sides of the Atlantic. The handloom weaver’s cottage where he was born still remains, as does the first public library he founded.

The late 19th century clock tower of the City Chambers dominates the centre of the city, but we were heading for the Abbey, passing first by Abbot House, the oldest surviving building within Dunfermline. Set into the original Abbey wall, its core dates back beyond the fire. Above the door is a phrase which, when translated reads “Since word is enthrallment and thought is freedom: keep well thy tongue I counsel thee,” which was set there for Robert Pitcairn, Commendator of Dunfermline, who died in 1584.

Sue Vincent is a Yorkshire-born writer and one of the Directors of The Silent Eye, a modern Mystery School. She writes alone and with Stuart France, exploring ancient myths, the mysterious landscape of Albion and the inner journey of the soul. Find out more at France and Vincent. She is owned by a small dog who also blogs. Follow her at scvincent.com and on Twitter @SCVincent. Find her books on Goodreads and follow her on Amazon worldwide to find out about new releases and offers. Email: findme@scvincent.com.
View all posts by Sue Vincent →
This entry was posted in adventure, History, Photography, scotland road trip and tagged Abbot House, Andrew Carnegie, Dunfermline. Bookmark the permalink.