Vexed, I’m very vexed ThreeLegs considers his state of mind, that place where all thoughts of noshing, eightleggers and sniffing live in a perpetual mush between the earflaps. And thinking about noshing, Threelegs’ belly reminds him he’s missing out on his brekkers at Freddy’s Farm. Bacon, well done scraps of bacon, anyways. Toast, the crusts. Sausage – burnt to perfection – and a touch of healthy kicking or a sudden wack out of nowhere from Freddy with his big stick. He is panting fast, tongue lolling. Thinking of home, starting to miss it all.

The orange sniff of nosh makes his snout holes flick and bubble with hunger.

Just down the street is Greggs. He can sniff the special of the day, two sausage, scrambled eggs and baked beans. Just the ticket!

But he’s reluctant to leave the PD compound.

Westley Piddle is a small town but ThreeLegs has hardly ever been here, ‘cept for whisking doggies, so is rightfully wary of the other fourlegs he can sniff all out and abouts. More warily, who can he call his bowls mates, his real snifz-friends nows that he’s all alones?

He snifz GitOrrf! and Tuffy, thems two streetlegs a constant presence ’round abouts town. Dismisses thems coz the last snoutz bumping ended on a sticky note.

He then snifz Missy Biscuits and Gunther walking their hindlegs companions up the high street. They’ll help me he perks up before recalling how the last bit of snout bumping with thems also ended up sticky’ish, lyk.

Wotz that familiar snifz? pointing his snout at some huge English Mastiff.

Wot then? earflaps flap, bouncing his thinkings from one earflap to the other, trying to dough up a good-sized plan. Trouble is, he needs good noshing to tweeze out good thinkings.

Greggs it is thens!

Snifz yu, too Drizzle bounds up to Threelegs, snouting him all over for good measure. A sniffy-red colour of barely contained violence sizzling off the big Rhodesian Ridgeback. But, for nows, nothing violent or sticky happens.

Drizzle to the intimates, but Mister Fudge to yuz Drizzle corrects Threelegs, sniffing a bit more than wotz polite ’round abouts ThreeLegs stump.

Corss mate, o’ corss Threelegs nods his big nobly head, trying his best to not start off a bloody scrap with this low-life streetlegs. Well, not before noshing, anyways.

Wot’cha doing out o’ Freddy’s, then?

Still supplying the Asian take-aways, then?

Only with the cripples 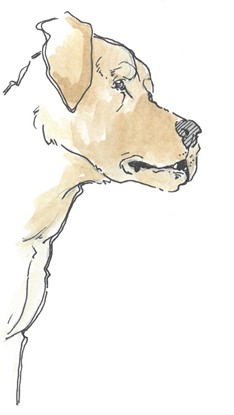 Not wishing to spill any more secrets regarding his professional whiskings and going ons, ThreeLegs changes the subject reckons I’d trot down to this here big city to partake the culinaratories of, erh he points his snout of Greggs

All-day brekkers special, mate Drizzle barks happily at the thought of noshing, all other thoughts out the earflap let’s go place some noshing orders!

ThreeLegs is used to nosh being served up in a bowl and placed in front of him. Sometimes with a solid bit of Freddy kicking for desert. Ain’t much chance of a good kicking today as ThreeLegs can’t sniff Freddy at Greggs. However, the novelty of going in search of nosh is all a new and unexpected challenge. At Freddy’s Farm everything comes to him. However, wot with him being a guest supervisor and a right hard survivor too, ThreeLegs is more than confident of sorting out some healthy noshing pleasures in West Pid. without mishap.

No butts, furry or otherwise, I’ll take the lead on this

ThreeLegs marches towards Greggs on his three legs. Drizzle, also being a bit of a survivor, whose misfortunes make surviving more lifestyle than life choice, decides to wait it out on the street and watch points. If Threelegs gets served an all-day special then he’ll trot in after him. Right quick, too.

Oh, and enquire about thems upsize portions, or is that only sausage rolls? Drizzle adds, drooling over the idea of sniffy pork sausage rolls served strait down his chops hole no need for ’ems on a plate, neither

The sound of hindlegs scritching explodes out of Greggs quickly followed by ThreeLegs exiting at speed on the pointy end of a hindlegs footpaw.

Drizzle observes the action from the safety of the pavement before trotting over to Threelegs sitting on his butt so, wotz the score on those upsize portions?

Follow Zozo, Jools and the Muttwits crew at their blog, Usual Muttwits

Part Five will be published on Wednesday

Sue Vincent is a Yorkshire-born writer and one of the Directors of The Silent Eye, a modern Mystery School. She writes alone and with Stuart France, exploring ancient myths, the mysterious landscape of Albion and the inner journey of the soul. Find out more at France and Vincent. She is owned by a small dog who also blogs. Follow her at scvincent.com and on Twitter @SCVincent. Find her books on Goodreads and follow her on Amazon worldwide to find out about new releases and offers. Email: findme@scvincent.com.
View all posts by Sue Vincent →
This entry was posted in Art and tagged Dogs, Humour, Westley Piddle. Bookmark the permalink.