Reaching for the sun

It doesn’t really matter where we think dreams come from, they often have things to say. Some regard them as spiritual, most accept their psychology but however we see them it is undeniable that we access areas not usually available to our waking thought.

Dreams may begin in that liminal hinterland before the candle of consciousness is snuffed out for the night and then we have that odd state where we observe the dream unfolding beyond our control and yet retain control of our conscious thoughts and can ‘make notes’. As I sank into slumber, I was in that state and quite firmly telling myself I’d have to get the dictionary out in the morning, scrawling notes on a mental blackboard that I could ‘read’ when awake. It wasn’t that I didn’t recognise the word, but in that context, it was going to have to be thought about.

The speaker I could not see, barely an outline in the misty light… and my thoughts went back to the bedside book I had just put down… an old favourite, Terry Pratchett’s Reaper Man, a book I have to say that I do not recommend for bedtime reading. Laughing out loud until the tears run is not conducive to sleep. On the other hand, as with all Mr Pratchett’s books, it does make you think quite deeply about the universe and the human condition.

The figure in the dream looked like the picture my mind paints of the Auditors of Reality, the faceless bureaucrats of the gods, albeit more radiant, and I can quite see where the crossover between the experience of the day and dream comes in there. “You are becoming an etiolated society,” said the voice.

Etiolated – it is what happens to plants when they are ‘forced’, like rhubarb, in the dark; growing long, pale and thin; without strength for lack of sun as their stems reach ever upward seeking for the light. Yes, I could see how that could apply; both physically and symbolically. It comes from the old word for the stubble used for bedding… for sleep… and that too makes symbolic sense.

Again Mr Pratchett came to mind, a moment in The Hogfather where Death talks about the belief in possibility that is needed to be human “…To be the place where the falling angel meets the rising ape.”

As I go out to face the day, no doubt I will be thinking about that. 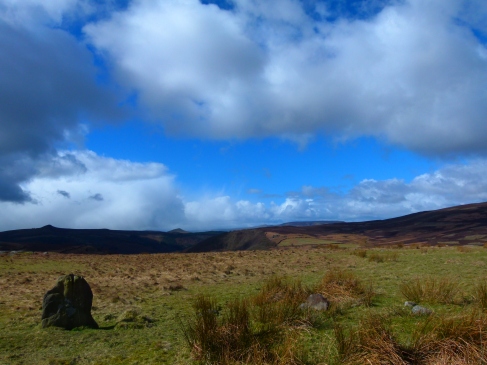 I don’t think belief has failed us, but we have moved away from a belief in the numinous being an integral part of our every moment and perhaps we are the poorer for it, replacing wonder with celebrity and magic with the special effects of a technological society. We doubt, question, dissect and demand proof… which implies a belief in possibility to begin with. Some things we can prove by scientific means, others we can only prove subjectively in the knowing of the inner heart.

We do stop and wonder and we do believe in that something that is magical, mystical or simply awe-inspiring… when beauty creeps in unexpectedly and we stand in awe before a wide horizon, or when a child conveys the magic of a moment with sparkling eyes. Then we remember that we are children too… children of a universe overflowing with wonder and delights and in those moments our etiolated soul, stretched thin by the constraints of the busy, confined lives we lead, bathes in light and drinks the sun that feeds us with all the colours of life.

Sue Vincent is a Yorkshire-born writer and one of the Directors of The Silent Eye, a modern Mystery School. She writes alone and with Stuart France, exploring ancient myths, the mysterious landscape of Albion and the inner journey of the soul. Find out more at France and Vincent. She is owned by a small dog who also blogs. Follow her at scvincent.com and on Twitter @SCVincent. Find her books on Goodreads and follow her on Amazon worldwide to find out about new releases and offers. Email: findme@scvincent.com.
View all posts by Sue Vincent →
This entry was posted in Photography and tagged Books, dreams, landscape, Life, light, plants, sunlight. Bookmark the permalink.

37 Responses to Reaching for the sun