Riddles of the Night: Knights, saints and ley lines…

Continuing the story of a Silent Eye workshop in Derbyshire, in December 2017. Parts One and Two can be found by clicking the highlighted link. 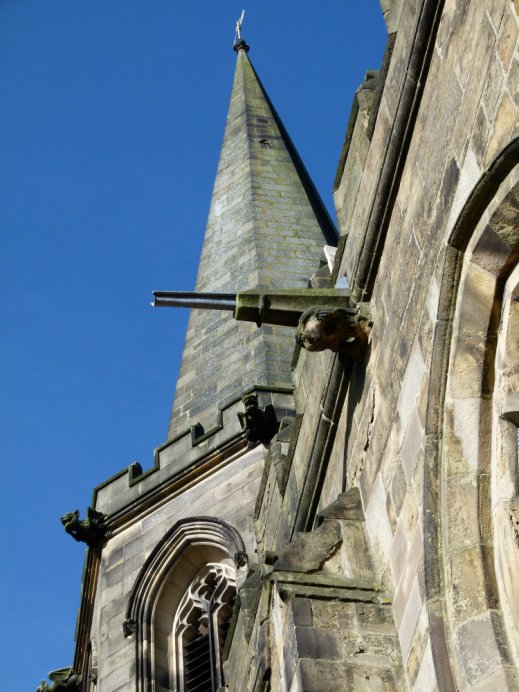 Walking through the town towards the church in Bakewell, I couldn’t help thinking that it was all a bit weird. There were inexplicable gaps between what we had seen and what we had been brought to realise, gaps that were only filled in by some fairly heavy research. We don’t normally go in for genealogies or land records, but this time, the situation seemed to warrant it.

The St Michael and the Dragon window at Skipton had started us off on a journey we had no idea we were taking until we finally arrived. And we are still not sure whether we have arrived or are merely taking a break. Probably the latter.

Shortly after Skipton, and in preparation for the workshop, we had wandered into Bakewell to revisit the church. We have been to All Saints too many times to count and find something new every time. They are usually things we have already seen, but which become significant only when we have put together new pieces of the puzzle. This time was no different. The St Michael window had set us off talking about the dragons that adorn the church tower in Bakewell. Both St Michael and the Dragon are associated with leys and one ley, or ‘dragon line’, runs through Bakewell from Arbor Low stone circle. 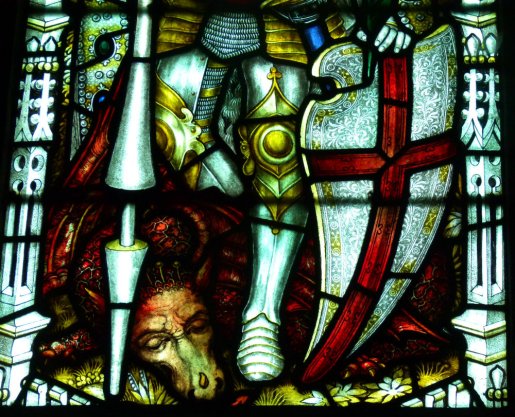 St Michael is particularly associated with the ‘Michael and Mary’ leys that run right across the country. Churches dedicated to both Michael and Mary are found on or around the line and it is something we have been looking at exploring further. In Christian terminology, St Michael is slaying evil, or, quite often, paganism. In basic esoteric terms, the saint may be seen to represent the ‘higher’ self, bringing the ‘lower’ self under control.

We had noted that the tower of All Saints is octagonal and has a dragon on each of the angles. Eight sided towers are very unusual. The church, founded in 920AD, is superb and contains examples, not only of the arts and crafts of a thousand years of faith, but also of many of the anomalies we had found in our explorations. 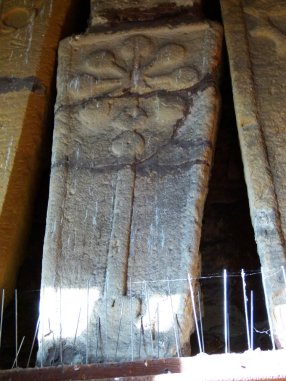 In the porch is a collection of Saxon and Medieval stonework. We had been primarily occupied with the Saxon period, but now, the eight-sided geometries of the carved crosses on many of the stones caught our attention. Especially as many of these cross designs are associated with the Templars… 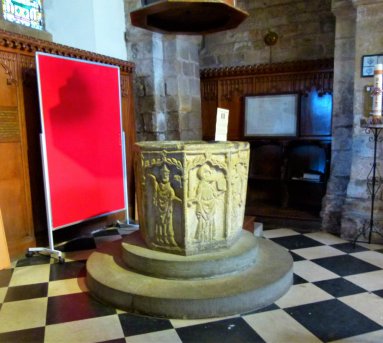 Just inside the door is a magnificent carved font dating to the 1300s. Oddly, that too is octagonal. Beyond the font are the information boards, and for once, we read them, looking for any facts about the tower. We learned that it had been funded by ‘wealthy land owners’ coming into the area… So had the ‘Newark’, the newly designed side chapel of the south transept. 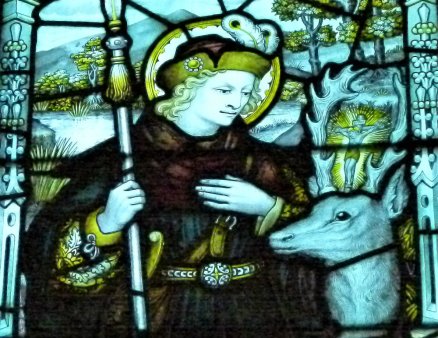 St Hubert, with his stag is the first stained glass window you come to. Between the stag’s antlers is the vision of the crucified Christ. Christianity overcoming paganism again? Or the more abstract Christ-force crowning earthly consciousness? St George and his Dragon stand beside him, and looked down on us indulgently as we wandered, taking in the lily sceptre of the little ‘Walsingham Virgin’ who looks like Isis holding Osiris. 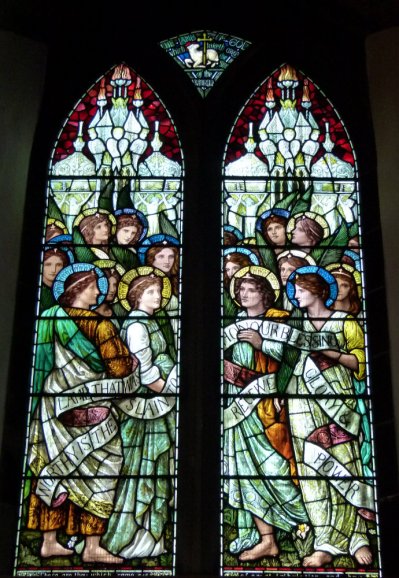 A little further down the north aisle is a Henry Holliday window of all saints and all angels, surmounted by the Agnus Dei. While that symbol may be used to represent Jesus as the Lamb of God, it is also a Templar symbol much associated with John the Baptist who was beheaded by Herod. And the Templars had been accused of ‘worshipping a severed head’ many believe may have been that of the Baptist. The knights had been rounded up in France, their lands confiscated, and many put to death. In England, some were held at Clifford’s Tower (a significant name, considering the Cliffords held the castle and church in Skipton). Others escaped and, following the Underground Stream theme of the weekend, themselves went underground. 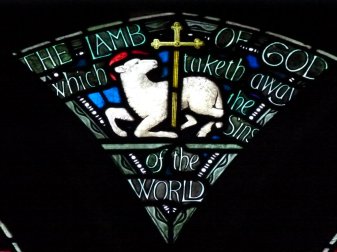 The mystery deepened as we looked again at the Comper reredos of St George apparently fixing his dragon to the earth, while above him, two golden dragons support the crucified Christ. In esoteric terms, you cannot help but see the symbolism of ascension through transmutation. All of which seems rather alchemical. But then again, both Comper and Holliday had thrown us curve-balls before. 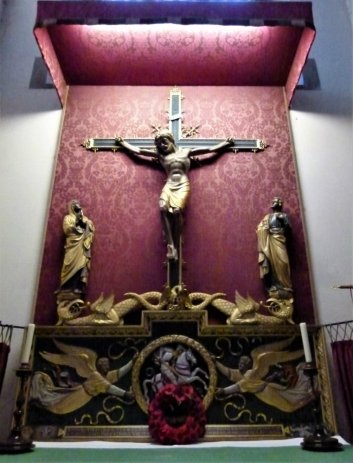 And there is the almost unique Foljambe memorial, showing the knight and his lady looking out of a window, surmounted by shields bearing their arms… the scallop shells of the pilgrims and the fleur de lys. Godfrey de Foljambe was a prominent landowner and a Knight of the Shrine, a term we had not come across before. A bit of research showed that a Knight of the Shrine is part of a confraternity authorised by the Church and with special dispensations. The Shrine Knights at Bakewell met in the Newark, the south transept that had been funded by wealthy landowners… The same chapel now holds the tombs of the Manners and Vernon families of Haddon Hall.

With all due respect and discretion, we dowsed the entire church and found anomalies indicating an eight-pointed star of currents, directly beneath the tower. We also found a pattern that reflected an odd symbol on a bishop’s tomb in Scotland that had been puzzling us. But it was not until we realised that the geometry of the octagonal tower is based on that of the Dome of the Rock in Jerusalem, that it all began to make sense.

The Templars had identified the Dome of the Rock as the Temple of Solomon. They set up their headquarters in the building next door and used the Dome on their official seals. Legend has it that they found a great treasure beneath the Dome. Perhaps it was not a treasure of gold and silver… perhaps all they found beneath the temple built by Solomon, famed for his wisdom, was the Underground Stream…

And perhaps we should have entitled the weekend Riddles of the Knight?

Sue Vincent is a Yorkshire-born writer and one of the Directors of The Silent Eye, a modern Mystery School. She writes alone and with Stuart France, exploring ancient myths, the mysterious landscape of Albion and the inner journey of the soul. Find out more at France and Vincent. She is owned by a small dog who also blogs. Follow her at scvincent.com and on Twitter @SCVincent. Find her books on Goodreads and follow her on Amazon worldwide to find out about new releases and offers. Email: findme@scvincent.com.
View all posts by Sue Vincent →
This entry was posted in Photography, riddles of the night and tagged ancient sites, bakewell, consciousness, dragons, history, landscape, Photography, riddles of the night, spirituality, St George, St Michael, symbolism, Templars, The Silent Eye. Bookmark the permalink.

1 Response to Riddles of the Night: Knights, saints and ley lines…