The wounded heart of Paris 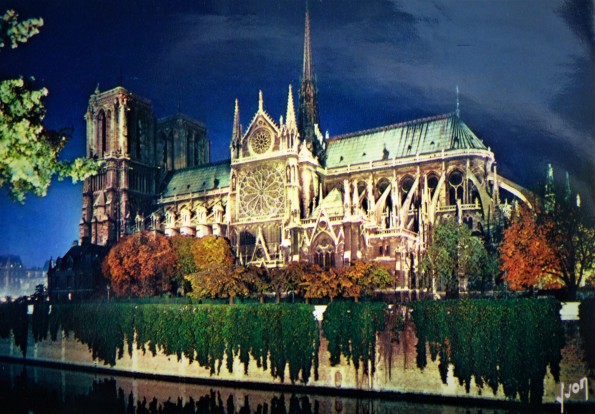 Notre Dame de Paris.
The three images of the Cathedral are photographs of postcards in my Parisian diaries.

The white dome of the Sacré-Cœur, floating like some fairy tale castle against the blackness was my very first glimpse of Paris. It was a school trip, we were no more than children… and I fell in love with the city there and then. My eyes filled with tears, my heart with memories and emotions that should not have been mine, I felt that I had come home.

We stayed at the Lycée Henri-IV, just behind the Pantheon. Sneaking out, illicitly, before breakfast, very early next morning, I found myself wandering down the Rue Mouffetard. A tramp was curled around his wine bottle in a doorway. Market stalls were being set up. Everything smelled of coffee and new bread… and I determined that one day, when I was old enough, I would come back.

We were shown ‘all’ the sights… as if you can see all Paris has to offer in two weeks!… and the first place we visited was just a short walk down the Boulevard Saint Michel… the great Cathedral of Notre Dame de Paris, that has stood at the heart of the city for over eight hundred years..

I remember that visit vividly. Although I would one day learn to know the place intimately, that was the only guided tour I ever took there. We were shown how the cathedral was built on an island in the middle of the Seine and how, on the parvis in front of it, from where all distances are measured to Paris, the remains of the many layers of Parisians had just been found, going as far back as our imaginations could take us. 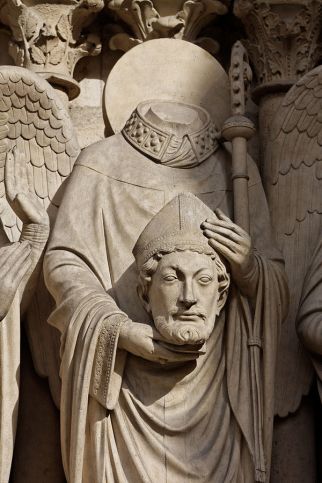 We were shown the statue of the headless saint in the frieze by the door. Not, we were told, John the Baptist, as many would imagine, but Saint Denis…and we learned his story and that relics of the saint had been placed in the tower, along with those of Saint Genevieve, the patron saint of the city.  We climbed the tower and heard the bells ring… and learned of Victor Hugo and his famous Hunchback, saw the gallery of kings…and learned how important this place had been throughout French history.

One memory that stands out, especially given where life has led me, is standing beneath the great rose windows, looking into the rainbow of light that streamed through the delicate tracery. Our guide told us that you could tell their age from the way the ‘spokes’ of the window did not point straight up, but were offset either side of the vertical. If you looked long enough, he said, the window would seem to turn, like a wheel, rather than staying still as ’12 o’clock’ windows would do. I watched…and was lost in the whirl of colour and stories, caught in a world of glass. 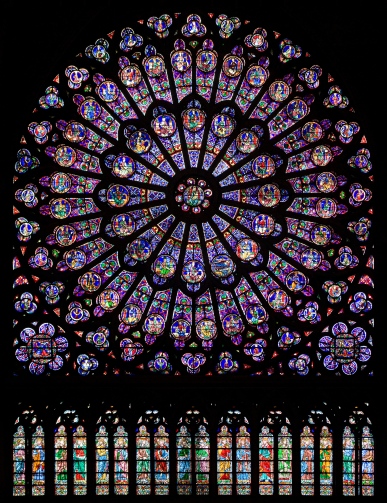 It was almost ten years before I went back and Notre Dame was one of the first places I went, lighting a candle in  gratitude. Having escaped a dreadful marriage, I had applied to work abroad. I was told I would probably not get the country I wanted, which was France, and it would probably be at least six months before I got a job offer. Two weeks later, I started work in Paris.

Over the next few years, I walked almost every inch of that city. I grew to know her moods, her shadows and her laughter…and I loved her. I spent my time with the artists in Montmartre, made friends there, talked through more nights than I slept and had the time of my life. I only left to marry an itinerant Parisien musician and make a home with him in Vichy.

There were a couple of trips to Paris, before our first son was born, and a final one when, reluctantly, we moved back to England to care for my mother… who did not actually need us by the time we got here after all.

That was okay, Paris was always there, waiting. Always a promise. One day, I would go back, and the first thing I would do would be to light a candle once more at Notre Dame. That was over thirty years ago. I have not been able to return, yet, and Paris still tugs at my heartstrings. 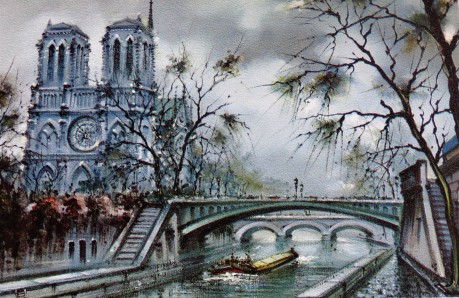 “…reduite en cendres…” sang the voice on the car stereo as I switched on the ignition after hearing the news of the fire at Notre Dame… ‘reduced to cinders…’. Tears that had been held in my heart finally spilled over as I listened to my ex-husband’s voice. The song, a typically French waltz, is one of my favourites. It captures something of the essence of the City of Light and, although it was written long after our ways had parted, it echoes my own love of the city, from its beautiful façade to its tawdry shadows. Although ‘my’ Paris was high on the Butte in Montmartre, the Cathedral symbolises the heart of the city in some indefinable way and I felt the grief of the city as keenly as if I were there.

The news is not as dire as it could be. No lives were lost. The building itself appears to be structurally sound. Many of the treasures and religious artefacts were saved. The rose windows appear to have survived and the statues of the Apostles that normally line the roof had just been removed for restoration works. The man who created them would have been glad… one of those statues was a self portrait, turned in the opposite direction from the others, to survey his creation.

The Cathedral will rise again, not only because of its beauty, its history, or its place in the religious life of the country, but because the fire strikes at the heart of France and the French will not have it any other way.

“Paris,“ sang Maurice Chevalier, “sera toujours Paris.“ Paris will always be Paris, and it would not be the same without that great ship of stone, sailing through time on the Île de la Cité. And one day, perhaps, I will still light that candle. 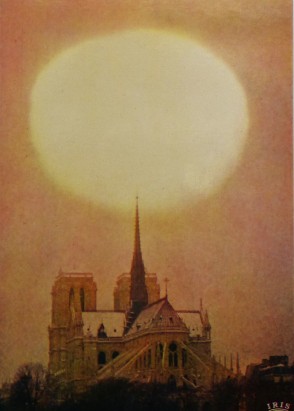 Sue Vincent is a Yorkshire-born writer and one of the Directors of The Silent Eye, a modern Mystery School. She writes alone and with Stuart France, exploring ancient myths, the mysterious landscape of Albion and the inner journey of the soul. Find out more at France and Vincent. She is owned by a small dog who also blogs. Follow her at scvincent.com and on Twitter @SCVincent. Find her books on Goodreads and follow her on Amazon worldwide to find out about new releases and offers. Email: findme@scvincent.com.
View all posts by Sue Vincent →
This entry was posted in historic sites, Memories and tagged art, beauty, fire, France, history, medieval architecture, memoirs, Notre Dame, Paris, youth. Bookmark the permalink.

53 Responses to The wounded heart of Paris