I’ve eaten a fair bit of snow in my time. Granted, it is usually attached to a ball…’cause if you get the ball rolling juust right, it can pick up loads of the stuff! It’s a good game… though some people don’t seem to understand that it can still be thrown…

The worst one though was when she cheated… I’d never met a snowball before, and chased it as she lobbed it through the air, expecting my teeth to meet on that familiar furry surface, just under the snow. You can imagine my face when it collapsed and disappeared! I was only young at the time… it was my first snow day… and some people thought it was so funny I thought I’d never get her home…

But, ‘pparently, there are other ways of eating snow, as writer Jo Pino explains…

Jo Pinto with her guide on an autumn street

As soon as the door closed behind the social worker, silence fell over the room, broken only by the soft crackling sounds of a log settling in the fireplace. The teenager stood beside the door where he’d been standing since his arrival, a rolled-up blanket tucked under one arm.

“You hungry, Ben?” the middle-aged man at the table asked, busy mending a pair of jeans. “There’s chili in the fridge.”

“Suit yourself. You’ll have to put down that bedroll sooner or later, though. Why not drop it on the couch for now?”

Ben hesitated, then shuffled across the hardwood floor and laid his blanket on the couch. His gaze darted around the room, coming to rest on a framed picture over the fireplace. He froze, staring at the smiling couple in the photo. The sullen scowl on his face hardened into an angry glare.

He strode to the fireplace in three quick steps, snatched the framed photograph off the wall, and flung it face down on the floor. “How could you? I don’t wanna look at ‘em!”

“Fair enough.” The man calmly crossed the room and picked up the photo. He glanced at it, then slid it into a desk drawer. “I wasn’t sure how you’d feel about seeing your folks up there. My question just got answered.”

“Look, Ben …” The man trailed off, then tried again. “The Iraq thing sucks. You lost a dad; I lost a brother. We need to make this work while your mom pulls herself together. We can fight each other or be a team, but either way, it’s you and me.”

Ben stared at his tennis shoes.

His uncle glanced out the window by the table. “It’s snowing again.”

“Your dad loved the snow. Winter was always his glory season.”

His uncle pressed on. “His old racing sled is still in the barn somewhere. He was legendary—the fastest thing on runners around here. He set records on the hill behind the church that haven’t been touched in thirty years.”

A hint of a smile creased Ben’s mouth for a second. Then the boy bit his lip and went back to glowering at his Reeboks.

“We could drag out that sled tomorrow when there’s more daylight.”

“I wouldn’t mind seeing the old girl again myself, maybe giving her a fresh coat of paint.” The man picked up the torn jeans from the table and found his needle. “Ever had snow ice cream?”

“Your dad and I used to … I’m surprised he never …” It was the uncle’s turn to look down at his shoes.  He swallowed hard. “Grab two spoons and two big mugs from the dish drainer.”

“Go outside and put a nice clean snowball in each mug, about twice the size of your fist.”

While Ben carried the mugs outside, his uncle took a jug of cream from the refrigerator. He whistled absently as he reached for a glass bottle on a high cupboard shelf.

“What’s that?” Ben asked as he re-entered the kitchen on a blast of icy wind.

“It’s real syrup from tree sap, not fake junk made of corn. Tastes like heaven.”

The man splashed some cream over the fresh snow in each mug, then drizzled syrup generously on top. He handed his nephew a spoon and began stirring his own concoction.

“Mix it up good,” he said as he took his first bite. “A treat fit for God Almighty.”

He watched as Ben stirred up his ice cream and then put the spoon to his lips. A smile spread slowly over the boy’s face, starting at the corners of his mouth and making it all the way to his eyes. 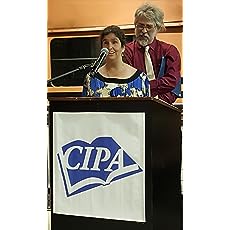 J. E. Pinto is a magnet for underdogs! Early in her married life, her home became a hangout for troubled neighborhood kids. This experience lit the flame for her first novel, The Bright Side of Darkness.

Pinto’s Spanish-American roots grow deep in the Rocky Mountains, dating back six generations. J. E. Pinto lives with her family in Colorado where she works as a writer and also proofreads textbooks and audio books. One of her favorite pastimes is taking a nature walk with her service dog.

“The Bright Side of Darkness” is my award-winning novel, available via Amazon in Kindle, audio, and paperback formats. The paperback version of my novel is also available at Barnes & Noble online.

The Bright Side of Darkness

What is a family? Rick Myers is a despondent seventeen-year-old who just lost his parents in a car wreck. His family is now the four teenage buddies he’s grown up with in a run-down apartment building. Fast with their fists, flip with their mouths, and loyal to a fault, “the crew” is all he has.
At least he thinks so until he meets Daisy, an intelligent, independent, self-assured blind girl. Her guts in a world where she’s often painfully vulnerable intrigue Rick, and her hopeful outlook inspires him to begin believing in himself.
But when the dark side of Daisy’s past catches up with her, tragedy scatters the crew and severely tests Rick’s resolve to build his promising future. Fortunately, his life is changed by a couple with a pay-it-forward attitude, forged out of their personal struggle with grief and loss. Their support makes all the difference to Rick and eventually to the ones he holds most dear as they face their own challenges.
“The Bright Side of Darkness” is a story of redemption and the ultimate victory that comes from the determination of the human spirit

To see my guest blog posts about parenting in the dark, please click here:
https://blindmotherhood.com/

To read guest posts on a variety of topics, please click here:
https://campbellsworld.wordpress.com/

Sue Vincent is a Yorkshire-born writer and one of the Directors of The Silent Eye, a modern Mystery School. She writes alone and with Stuart France, exploring ancient myths, the mysterious landscape of Albion and the inner journey of the soul. Find out more at France and Vincent. She is owned by a small dog who also blogs. Follow her at scvincent.com and on Twitter @SCVincent. Find her books on Goodreads and follow her on Amazon worldwide to find out about new releases and offers. Email: findme@scvincent.com.
View all posts by Sue Vincent →
This entry was posted in Ani's Advent Calendar and tagged grief, hope, ice cream, loss, love, snow, snowballs. Bookmark the permalink.