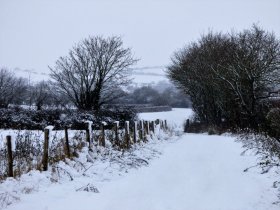 Cade lived on his own in a condo in the heart of downtown Toronto.  This wasn’t always the case, though.  He was married once and had a daughter but one day tragedy struck.  While he was out trapping lines, his wife and their eleven month old daughter had just returned from a walk when they were attacked by a bear.  Neither survived the attack. He returned home to find the animal still there and when it charged at him, he shot it.  He found their lifeless bodies and was overcome with grief.  The community reeled from this tragic incident and rallied around him.

He sold the cabin and moved to Toronto.  He wanted to be as far away as possible from where the tragedy occurred.  He never returned to the Yukon or the cabin again.  Too many painful memories and he was bombarded with self-recrimination.  It had been his idea for Joan to spend part of her maternity leave at the secluded cabin.  They would have been safer at their house in Whitehorse.  He blamed himself for what happened.  Joan and Chrissy would still be alive if it weren’t for him.

Continue reading at Notes to Women

Sue Vincent is a Yorkshire-born writer and one of the Directors of The Silent Eye, a modern Mystery School. She writes alone and with Stuart France, exploring ancient myths, the mysterious landscape of Albion and the inner journey of the soul. Find out more at France and Vincent. She is owned by a small dog who also blogs. Follow her at scvincent.com and on Twitter @SCVincent. Find her books on Goodreads and follow her on Amazon worldwide to find out about new releases and offers. Email: findme@scvincent.com.
View all posts by Sue Vincent →
This entry was posted in photo prompt, Photography and tagged Jamaica, job, Life, married, maternity leave, memories, men, ontario, opportunities, park, publishing company, relationship, self-recrimination, Tim Horton's, Toronto, tragedy, trouble, Whitehorse, yukon. Bookmark the permalink.