We woke, the dog and I, to a white and wintry world. A hard frost stuck the soles of my slippers to the path as I went out to retrieve the first ball of the day. I have attempted to explain, over the years, that, given both her species and her parentage… she is supposed to do the retrieving, but if the grass is cold, wet or muddy, she disagrees. She gets it half right…the setter half of her will ‘set’, freezing into the classic stance and indicating the ball’s position with every tense line of her body. It is the retrieving half she refuses to acknowledge, except for the Toller’s ‘song’ with which she is apt to communicate if I am not taking enough notice. Especially when a ball is in play. 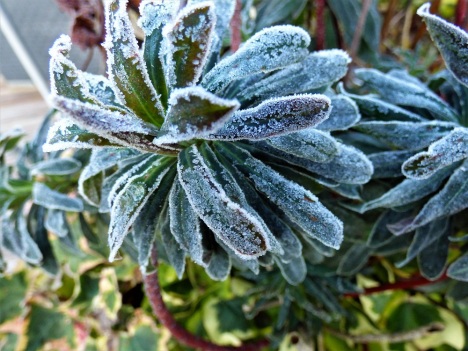 So, in naught but dressing gown and slippers, I went out into the frozen morning to retrieve the ball. The first creeping flush of dawn suffused the horizon, lighting layers of white mist as the temperature dropped. I love this time of morning, when the world is still hushed. Behind the curtains, homes are waking, but the noise of modern living has yet to disturb the silence and it feels as if you alone are witnessing the daily miracle of the reborn sun. 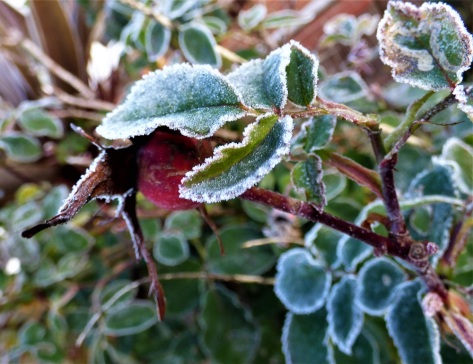 Every leaf and blade of grass was outlined in crystal, gilded by the morning light, but our morning walk was brief… the bitter cold seemed to penetrate every pore, and the need to hit the road meant I had one eye on the clock. Ani curled up on the sofa, I scraped the frost from the car and headed to work, driving through a wintry wonderland, struck by the contrast between the silent, swirling mists and the steaming exhausts of the traffic. 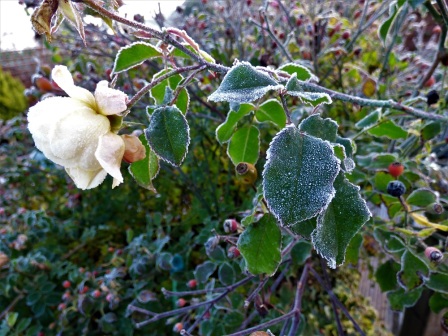 The sun rose as I drove east, at one moment it seemed poised atop a cloud and I wished I could use the camera. These wintry, sunlit mornings are amongst the most beautiful of days. Details that pass unseen are highlighted by frost and the world has a clarity it lacks under a summer sun. Even the faltering flowers are touched with a final beauty as winter administers the coup de grâce.

It didn’t last long. Within an hour, the fog had settled in, blurring the lines of reality, softening sound and blanketing the world in grey, quite unlike the pristine mists of dawn. Not for the first time, and in spite of the occasional moan, I was glad I have to rise early. An hour’s extra sleep and I would have missed so much beauty… sometimes you just have to be in the right place, at the right time…and be awake.

Sue Vincent is a Yorkshire-born writer and one of the Directors of The Silent Eye, a modern Mystery School. She writes alone and with Stuart France, exploring ancient myths, the mysterious landscape of Albion and the inner journey of the soul. Find out more at France and Vincent. She is owned by a small dog who also blogs. Follow her at scvincent.com and on Twitter @SCVincent. Find her books on Goodreads and follow her on Amazon worldwide to find out about new releases and offers. Email: findme@scvincent.com.
View all posts by Sue Vincent →
This entry was posted in flowers, nature, Photography and tagged frost, morning, winter. Bookmark the permalink.