The One Bedroom Ark

Noah Coyne began to count the cash in his till. The flashing of the crosswalk light on the corner caused him to look up. His reflection in the store’s front window flashed yellow every time it blinked.  Outlining his proud chin and the life lines etched across his brow, the amber beam outlines a handsome man of seventy-one. The image reflected in the glass has dark holes for eyes for the faint light cannot capture the vibrancy of the owner’s gaze. Eyes of the darkest blue, like fresh steel, stare out at the empty street in front of his store. The pavement, wet and slick from a drizzling rain, shines yellow and black, yellow and black, until the warning light suddenly stops. He looks up, wondering if the person he can see crossing the street might be coming his way – one more customer before he closes. He checks the watch that covers his hairy wrist and, seeing that it’s 9:30, heads to the entrance to bring in the specials sign he places outside each morning.

A wide cement threshold, pockmarked and etched by the passing of many years and many feet, divides the front of Coyne’s Confectionery and the city sidewalk. The sandwich board that holds his daily message, slouching from a weak hinge, is to the right of the double glass doors. While folding the display in half, Noah breathes in the cool, clean night air. Tucking the sign under his arm, he is warmed by the same memory the board provokes each time he touches it. His father had built the sign fifty-seven years ago. From the first day Noah worked in his father’s store, his first chore was to put the sign out front. He even remembers the first message printed in blue chalk in his Dad’s neat hand, Welcome my son, Noah, to the family business. Bananas 6 cents/lb.

He didn’t see the girl who approached him from behind until she spoke in the weariest of tones.

Noah turned abruptly, startled from his reverie. Before him stood a very young person, swathed with a backpack and a black nylon travel bag slung over one shoulder. On the other shoulder was a bundle wrapped in what looked like a beige tasselled shawl.  Everything was wet.  Stray strands of dark hair fell from her ponytail to cling to her slender jaw. A smudge of something dark touched one pale cheek. When Noah looked into her big, dark eyes, he was saddened by the confusion he saw there. They softened slightly when she added a weak smile to her slim ordinary face.  Reaching out to hold open the door, he waved her in.

She straightened her shoulders, the bags obviously heavy, before preceding him into the store. As she passed in front of him, he noticed an opening in the shawl. Peeking over her shoulder, he looked into the cavity and was surprised to see a baby’s pink face. He stared at the infant until the two of them moved to the left. Returning to the cash on the right, he was perplexed by how small the child seemed; it must be very young he told himself.

He sat on the stool behind the counter, listening to the scuffing of her feet as she moved about the rows of merchandise. Looking up at one of the mirrors fixed to the back corner near the ceiling, he saw her turn into the center aisle. She was sideways to the mirror when she stopped halfway up, in the section where he kept clearance items. She dawdled for several minutes before he saw her tuck something into the shawl in front of the baby. It hurt him deeply when he thought he had seen innocence in her troubled eyes. He rose from his perch to confront her when the cradled infant’s face flashed in his mind’s eye. Sitting back down, he pondered his options.

Balancing two cans of soup in her free hand, she approached and awkwardly placed her items on the counter before him. As she did so, he reached under the counter to tear off several sheets of paper towel.

“Here, you’re a little damp and you have something on your cheek.”

Eagerly she accepted his offer, smiling widely. As he rang up the sale, she brushed the moisture from her neck near the baby, her forehead and hair. She dabbed at the smudge on the side of her face, smearing it instead, making it worse. Noah grinned at her efforts and said, “That’ll be $1.06 please. You missed a little, closer to your nose.”

Placing the wet tissue on the counter edge she reached into a side pocket of her thin jacket, removing a cluster of coins, mostly pennies. Sliding one loose at a time with her thumb, Noah watched her counting out nickels, dimes and coppers. At the end of her coins she stared at them for a few seconds before meeting his fixed look. They both knew she didn’t have enough. Noah tried to fathom the poor girl’s plight, so young, bags in tow and an infant on her shoulder.

“You know what; I think I made a mistake. Just a second.”

He cancelled the transaction and keyed in new amounts until the register read eighty-two cents. Seeing the new amount, she gave him a tight-lipped smile, knowing what he had done. Her eyes grew glossy at this act of kindness before she hung her head. Guilt and sorrow leaked from beneath her tender lashes, dropping heavily to the floor. She stuttered, trying to stifle a sob.

She reached under the edge of the shawl, seemingly from beneath the child, removing a multi-gadget tool and placing it on the counter with a thin, shaking hand. She teetered as she began to cry. Rushing around to steady her, he grabbed the paper towel, handed it to her and offered to hold the baby. She placed her bundle in his arms to lean against the counter, her young body tired, stooped like a thirsty plant. Balancing the baby, he stepped toward the narrow window ledge where he kept items for impulse buyers. Rearranging the display of lighters, he motioned for her to sit. Moving to the front of the store, he reached into his front pocket for a bunch of keys.

“I’m just going to lock up; you take it easy for a minute. This baby is a very deep sleeper by the way.”

Calmer now and with some pride she said, “She’s a good girl and I just fed her. All she does is eat and sleep, thank goodness.”

After locking the door, he returned to stand in front of the girl, the baby secure in his arms.

“When you’ve composed yourself, I’ll help you get home. You can have the camping utensil. I can’t sell the darn things anyway. But don’t let me catch you stealing again. You don’t want your life going in that direction.”

She nodded at his words, her head still on her chest, strands of long hair carelessly hanging down. A forlorn figure in his eyes. A silence ensued as she gathered herself. The monotonous droning of the coolers in the back seemed louder, more disturbing, until she spoke in a lost, hopeless whisper.

Thank you Sue for this opportunity to share my story with your readers. For those that are interested in reading the rest, please go to South Branch Scribbler.

I live by Cocagne Bay in Eastern Canada where the summers are hot by the seaside and the snow is deep in the winter. I married the greatest gal on earth, Gloria, and have a wonderful son Adam, two great stepsons Mark (Nathalie) and Chris (Mireille)Young. Three grandchildren Matthieu, Natasha and Damian.

I love reading. My mother was my school teacher and taught me to read and write when I was young. I’m thankful for that.

I’m a carpenter, woodworker, aspiring author and I sell jewellery for a living at Peoples Jewellers.

I love jazz music and am a HUGE fan of JJ Cale.

I have a wonderful life. I hope that you will read my novels – Wall of War and Dark Side of a Promise. I trust you will enjoy them and if so please tell someone.

Dark Side of a Promise

Williston Payne’s sister was murdered three years ago. The man that did it is still at large. Until now! His best friend- Drake Alexander – is an ex-soldier, a Canadian Commando. He’s made a promise to Payne that he will find him this time… and kill him.

“…tons of intrigue, clandestine meetings, death, murder, exotic and unusual settings. All the qualities that come with a well crafted novel.” Extract of Amazon review 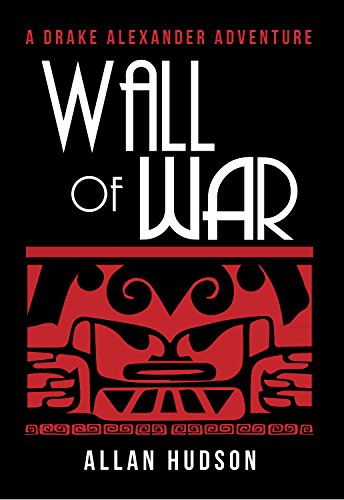 Deep in the wilderness of the Peruvian Andes lies a monument hidden for centuries. Who were the builders? Why was it abandoned? What secrets will it reveal?

In 1953, an amateur rock climber makes a startling discovery. He decides to report his findings as soon as he returns from climbing the mountain. It will take another fifty years before anyone reads what he wrote.

In 2004 when Drake Alexander hears of the strange discovery, he and those dear to him are plunged into a nightmare of avarice, impairment and death. Using his skills as an ex-soldier, can he and his accomplices save his tormented friends from the raiders that thirst for the secret lying within the mountains?

Sue Vincent is a Yorkshire-born writer and one of the Directors of The Silent Eye, a modern Mystery School. She writes alone and with Stuart France, exploring ancient myths, the mysterious landscape of Albion and the inner journey of the soul. Find out more at France and Vincent. She is owned by a small dog who also blogs. Follow her at scvincent.com and on Twitter @SCVincent. Find her books on Goodreads and follow her on Amazon worldwide to find out about new releases and offers. Email: findme@scvincent.com.
View all posts by Sue Vincent →
This entry was posted in Books, fiction, Guest post and tagged fiction, mystery, rain, short story. Bookmark the permalink.

41 Responses to Guest author: Allan Hudson -The One Bedroom Ark