A flying visit – Seeing the details 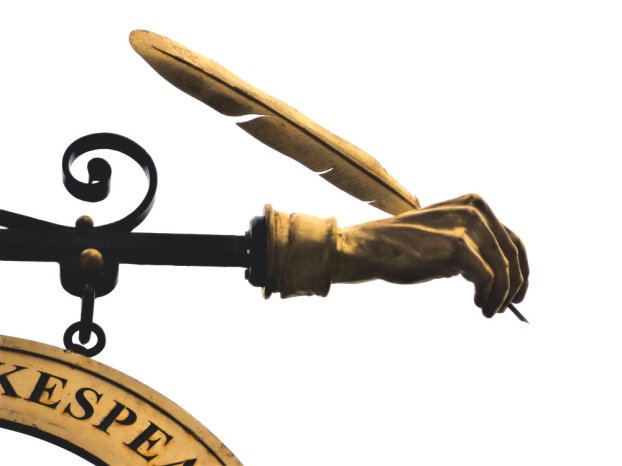 It is impossible to walk around Stratford-upon-Avon without noticing its history, its art or its connection to William Shakespeare. Half timbered buildings are, it seems, everywhere. Statues and artistic depictions of the Bard vie with signs bearing his name or allusions to his work… in every conceivable place. There are, however, an awful lot of details that are easy to miss, unless you happen to be looking in the right direction.

Take the theatre, for example. The red brick building dominates the town. At first glance, it seems out of place, but closer inspection shows it to be an Art Deco creation that has evolved over time to incorporate new spaces and a theatre in the round. The 1932 building replaced an earlier edifice that was destroyed by fire. The current building was designed by Elizabeth Scott, and was the first major public space designed by a woman. It is not until you look up that you notice the discrete panels of sculpted brick depicting scenes from Shakespeare’s plays.

The Old Bank, another red brick leftover from a bygone age, sports a gilded mosaic above its door, but more interesting are the many scenes in a frieze that runs around the entire building. Some are a little obscure and less easy to identify, others, like Othello, King Lear, Midsummer Night’s Dream and the witches from Macbeth take no effort at all. 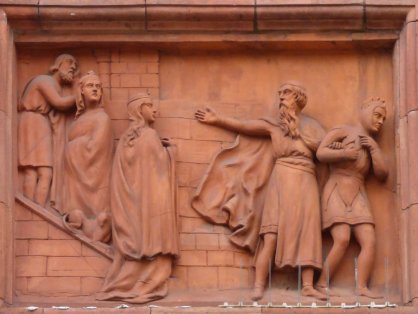 There are statues in niches, on pedestals, in gardens and perched on lamp posts. Modern, quirky, classical… dating from any and all eras… and almost all of them honouring the Bard in some way. 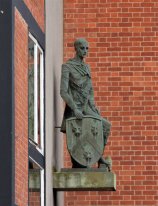 Some of the artwork, though does not commemorate Shakespeare but was created during his lifetime. Not far from the site of  New Place, the house where Shakespeare died in 1616, is the oldest pub in town… the Garrick. Parts of the building date back to the 1300s, but the majority of the structure is dated to 1596, as is Harvard House next door.

Even from a distance, the timber catches the eye, but take the time to look a little closer and the details begin to reveal themselves. Vines and Tudor roses, fleurs de lys and Green Men, animals, portraits and intricately woven strapwork cover the ancient timbers. The carvings are surprisingly sharp for their age, and who knows how long the trees from which they were made had watched the world turn? 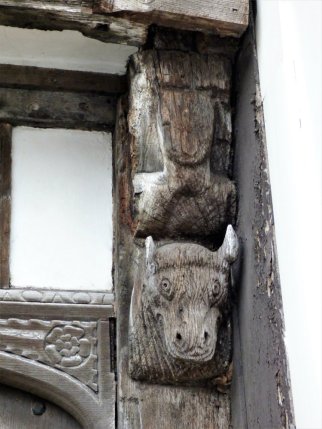 There has been an inn on this spot since medieval times and it is altogether possible that Shakespeare frequented the place. It has seen much in its long history, far more than is recorded to satisfy the curious today. The inn was thought to be the place where the plague struck the town when a weaver’s apprentice, Oliver Gunn, died of the disease there in 1564 and it has the reputation of being haunted. 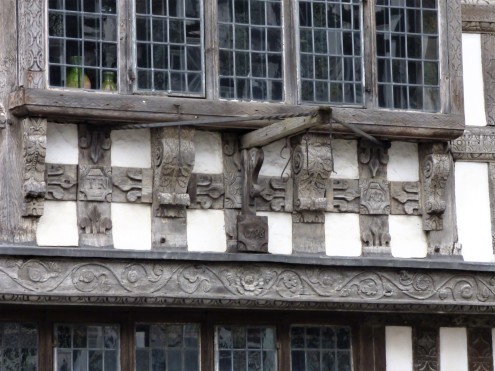 Harvard House, next door, was built by Thomas Rogers, a successful butcher, corn and cattle merchant. His initials, and those of his wife are carved, with the date, on the timbers. Rogers served as an Alderman with Shakespeare’s father and was the grandfather of the same John Harvard who endowed Harvard University in the US and for whom it was named. A few doors down, a Thai restaurant now occupies another timbered building. Upstairs, there is a stage, part of a theatre… did Shakespeare frequent that too?

The nicest thing, though, is to see that these Tudor buildings are still very much a part of the life of the town…not just tourist attractions. Whether they are selling shoes, fudge, or still fulfilling their ancient roles and serving the thirsty, these old places are very much alive. In a strange way, they offer a glimpse into both past and future, as the facades and carved faces that once knew only horses, now suffer the passage of cars and buses. Neither the buildings nor the people they serve have changed very much in the past few hundred years. Our technologies have evolved and we have multiplied beyond belief, yet our basic human needs and nature remains the same and are unlikely to alter, except in the details.  Yet, we have it in our power to shape the world and our lives more dramatically than at any time in human history… I wonder what future we will write for ourselves?

“Lord, we know what we are, but know not what we may be.”
~ William Shakespeare, Hamlet.

Sue Vincent is a Yorkshire-born writer and one of the Directors of The Silent Eye, a modern Mystery School. She writes alone and with Stuart France, exploring ancient myths, the mysterious landscape of Albion and the inner journey of the soul. Find out more at France and Vincent. She is owned by a small dog who also blogs. Follow her at scvincent.com and on Twitter @SCVincent. Find her books on Goodreads and follow her on Amazon worldwide to find out about new releases and offers. Email: findme@scvincent.com.
View all posts by Sue Vincent →
This entry was posted in Art and tagged Elizabethan, historic sites, Inn, Jacobean, Photography, play, pub, shakespeare, stage, Stuart France and Sue Vincent, The Silent Eye, theatre, travel, Tudor, writing. Bookmark the permalink.

21 Responses to A flying visit – Seeing the details