Notes from a small dog: The Houdini effect or how to worry your human 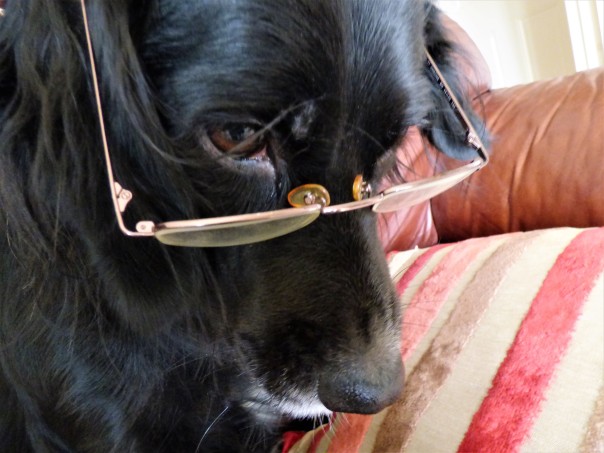 No, I am not ill, no matter what she might think.  I just like to keep her on her toes a bit.

You know what she’s like, into all this sickology stuff. I thought I’d have a go at it too. She’s always going on about how easy it is to fall into habits and such… so I thought I should put her theories to the test. Give her a taste of her own flea tablets, you know?

So, not only did I not eat my own dinner, I didn’t eat hers either. Or the bit of cheese she offered me. That made her stop and think. To be fair, I’d already had some fish and some treats, so I wasn’t really all that hungry… thought I’d save it for later… You’ve no idea how uppity she can get when she treads on cold, buttered toast in the dark…

Anyway, she gets all concerned about me not eating. Even left the fridge open again… I think she was tempting me. Still, if she was, then ‘good girlie, Ani‘ doesn’t make a lot of sense. I got more cuddles though and that’s always good.

So I tried something else. I let her groom me without wriggling. I even let her put the flea stuff on my back. I haven’t got any…nasty, itchy things that they are, I’m told… but the boy has got a cat, and the cat has a cat flap and an automatic feeder… and all the neighbourhood strays have found it, she says. So she’s not taking any chances. She came back from the boys’ house fair reeking of flea stuff. I wouldn’t be surprised if she de-fleas the fish next!

Where was I? Yes, so no wriggling. That unnerved her a bit too. She started wandering around with those squiggly lines between her eyes. You can tell when she’s getting worried. Then, when I came in first time she called, “You sure you’re not poorly, Ani-girl?”

Even worse,”Are you finally getting trained?” Well, one of us is….

Heh. I was having fun. Trouble is, I ended up putting myself in a bit of a dilemma.

You see, it was dustbin night. She has to have the recycling stuff put out for six in the morning, so she usually puts it out late at night. If she remembers. Well, she didn’t, not until late, so off she waltzes near midnight, in dressing gown and slippers, to take the bin out. All well and good. She shuts me in the house so she can unlock the back gate while she does it. I heard her lock it again before I came in… then she let me out into the garden for late night necessities.

It is dark in our back garden. Really dark. I watched her go back to work, then realised that she might have locked the lock, but the gate was not closed properly. Well, could you resist?

I’ll draw a veil over what happened next, ’cause it would only worry her if she thought I’d been out on my own… She must have looked for me outside, ’cause if I don’t come in, I generally stand at the door waiting for the ball. I wasn’t there, so she closed the door thinking I’d come in and gone to bed, ’cause that is my habit.

Serves her right for making assumptions…

About one in the morning, I thought it was time for bed. Good job she was working late…though I always get a cuddle before she goes to bed, so she’d have noticed sooner or later. I had to scratch the window to let her know I was there. She jumped! “Ani!”she says, “What have you been up to? Daft dog, why didn’t you come in?”

I thought it best to throw the ball for her…distract her a bit… so I got my cuddle and went to bed without having to tell her anything.

Then this morning, she opens the back door and goes to make my breakfast. I did what I had to do, even though the grass was cold and wet, then threw the ball for her. I like to stand and wait for her to fetch it. It’s good for her.

“If you think I’m going out there barefoot in the rain to chase a ball, Ani-girl, you are very much mis….ohmygod!” She dashes out in the rain, barefoot, dressing gown flying. The ball had landed by the locked-but-wide-open back gate, which she shut really quick! Then she came and snuggled me with loads of ‘Good girlie, Ani’s.

It wasn’t till later, when she’d had a cup of that coffee stuff she likes so much, that the brain started working… then it was, “Hang on a minute… Ani?!?”

I thought it best to beat a retreat ’bout then and hid under the table. If all else fails, I’ll plead innocence…

But either way, it just goes to show that these habit things can get you in an awful lot of trouble when you don’t pay enough attention… it certainly woke her up!

Mind, I’m not sure about all this muttering and running round with screwdrivers an’ stuff.

Wonder what she’s up to?

P.S. Don’t forget to send me your letters to Santa!

Sue Vincent is a Yorkshire-born writer and one of the Directors of The Silent Eye, a modern Mystery School. She writes alone and with Stuart France, exploring ancient myths, the mysterious landscape of Albion and the inner journey of the soul. Find out more at France and Vincent. She is owned by a small dog who also blogs. Follow her at scvincent.com and on Twitter @SCVincent. Find her books on Goodreads and follow her on Amazon worldwide to find out about new releases and offers. Email: findme@scvincent.com.
View all posts by Sue Vincent →
This entry was posted in Dogs, Humour and tagged cats, dog training, escape, habits, Houdini, pets. Bookmark the permalink.

74 Responses to Notes from a small dog: The Houdini effect or how to worry your human