Stones in the stones

It wasn’t the most promising sky… or at least, what it was promising didn’t look pleasant, but we really felt the need to get out and about. There was work to be done and, as that work takes us across the moors and in amongst the ancient stones of our ancestors, I for one would not be complaining. Our first port of call would be another visit to Barbrook.

We have been working with this particular site for a long time. Three stone circles and innumerable cairns litter a small stretch of moor. It was here that we had first ritually planted small crystals in the earth during our autumn workshop weekend. We had done so again after the Feathered Seer workshop, when we had brought Nick, Alethea and Deb to the site and we were checking on the stones of the circle as we would a patient.

We approached from the ‘back’ way this time, rather than using the well-worn modern track. It always feels better coming this way and, although we varied our route and inadvertently found the boggy ground that is the reason for the higher route, the circle looked better as we approached. It is hard to explain, but the stones were clearer, more present, than they had been for some time. They even looked bigger… though that was not something that was going to show on photographs.

We passed the rebuilt cairn that had contained the cremated remains of a child, buried with care in a collared urn. I always wonder about that child… who was he or she to merit such a large monument? How much was that child loved… or what position did it hold in the life of the community? Many of the other cairns between which we pass on our way to the second circle are smaller. Most of them have been roughly excavated or robbed, but even their remains show they lacked the stature of this one, so close to the stone circle itself.

The second circle is the oddest of these sites, being classed as an embanked circle, but looking more like a hut circle, the foundations of a  dwelling place. Yet within the interior walls are set the small standing stones that mark it distinctively as a stone circle. We sat there a while, enjoying the sense of welcome and planting a small stone from the workshop. Many people leave offerings of one kind or another at these ancient sites, usually flowers, shells or coins. Very occasionally, someone will leave a crystal. They are often placed within the contours of the stones and it is possible that this practice goes back a very long time indeed. I believe it is important to leave only what nature can take back.  Our stones are small and never left where they are visible. So, we knew the offerings that had been left at the stone circle were not ours…

Even after the work we had done at the circle, there suddenly seemed to be a lot of stones… Perhaps the seeds that had been planted were growing… 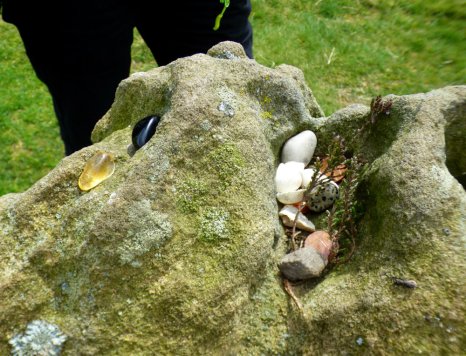 Sue Vincent is a Yorkshire-born writer and one of the Directors of The Silent Eye, a modern Mystery School. She writes alone and with Stuart France, exploring ancient myths, the mysterious landscape of Albion and the inner journey of the soul. Find out more at France and Vincent. She is owned by a small dog who also blogs. Follow her at scvincent.com and on Twitter @SCVincent. Find her books on Goodreads and follow her on Amazon worldwide to find out about new releases and offers. Email: findme@scvincent.com.
View all posts by Sue Vincent →
This entry was posted in albion, Ancient sites, Photography, Stuart France and Sue Vincent and tagged Derbyshire, esoteric workshop, modern mystery school, sacred sites, spirituality. Bookmark the permalink.

13 Responses to Stones in the stones