The eggs of the swan

After the festivities of the afternoon, there was time for a convivial meal with all our friends at the George and Pilgrim, the 15th century inn that still houses guests, history and ghosts. The town was busy with the Beltane celebrations and it took a little ad hoc rearranging of the dining tables to ensure we could all sit together and talk. There is never enough time to talk.

By this time, I was coughing and spluttering in good earnest; the cold seemed to be offended that I was ignoring it and decided it would try being bronchitis instead in order to gain attention. The rain that had been at least reasonably cooperative during the day was also threatening to make its presence known. Morgana suggested the party should walk up to the Eggstone on the Tor in the fading light. Common sense should probably have prevailed, but the combination of visiting the stone with friends, inadequate sandals and wet grass proved irresistible.

Being well supplied with cars and the various groups needing to part after the visit, we drove to the ‘back’ of the Tor for the ascent… we would only be going part of the way up this time. Before we could walk the Tor, however, we needed to announce our presence and ask permission of the guardians of the hill. It is a modern tradition… throw a stone to ring the bell that is guarded by the swans. This echoes the actions of the swans of nearby Wells Cathedral, where the mute swans of the moat ring a bell at the Bishop’s Palace to be fed. But there are many other links to the area, from the finding of Brigid’s bell,  to the very shape of the Tor itself, which when seen from the air resembles a swan.

We climbed the short slope to the gate, watching the spring lambs play in the water as the ravens watched us. Below us the slopes were covered by the pale blossoms of the apples of Avalon, while we walked one of the ancient terraces that wind their way seven times around the sacred hill. We had not seen the Eggstone before, though we had encountered it in odd circumstances. In the early days of the Silent Eye, we had run a ‘walk and talk’ event in the town, choosing sacred sites from all parts of its mystical history, sharing readings and, at each site, a meditation. I wrote the meditations based purely on the ‘feel’ of the sites at previous visits and some general knowledge of symbolism; I did not know Glastonbury very well back then. At the White Spring, the meditation took in dragons and eggs… and Morgana afterwards told us of the Eggstones and the caverns beneath the hill. Until then, the only caverns I had known of were mythical, but the stones were a revelation. 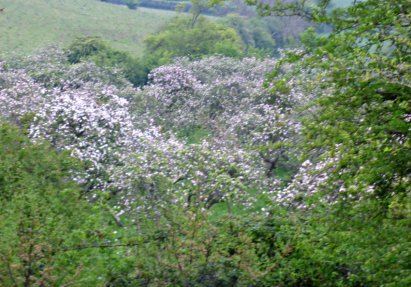 Little is known of the significance of the Eggstones. There is another one in the Abbey grounds that may have once supported a cross, but which may have been part of a much older veneration too. They are part of the local geology, natural stones called ‘Tor burr’ that emerge over time from the softer, surrounding sandstone. They do resemble huge stone eggs and, with the Tor as a swan, it must have seemed as if the land itself was giving birth to these magical stones. No wonder, then, that the legends suggest they are gates to the Otherworld…to the realm of the Fae. Some regard them as such, some associate them with fertility and birth… some of us see little difference in the essence of those concepts.

In local folklore, many see them  as wishing stones and the thorn tree close by is festooned with clouties and offerings… of which Morgana, our guide to the stone, has written. As the rain began once more, we sheltered beneath the tree before making our way back to the cars and saying farewell to one of our friends. There is never enough time…but at least most of us would be able to share May Day…

Sue Vincent is a Yorkshire-born writer and one of the Directors of The Silent Eye, a modern Mystery School. She writes alone and with Stuart France, exploring ancient myths, the mysterious landscape of Albion and the inner journey of the soul. Find out more at France and Vincent. She is owned by a small dog who also blogs. Follow her at scvincent.com and on Twitter @SCVincent. Find her books on Goodreads and follow her on Amazon worldwide to find out about new releases and offers. Email: findme@scvincent.com.
View all posts by Sue Vincent →
This entry was posted in albion, ancient mound, Ancient sites, Avalon, Sacred sites, Stuart France and Sue Vincent and tagged Avalon, beltane, May Day celebrations in England, maypole. Bookmark the permalink.

23 Responses to The eggs of the swan